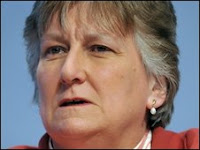 'She's the Tory it's ok to like' I was told today and I couldn't disagree.  Annabel Goldie, after insisting on Friday she would continue as leader of the Scottish Conservatives, became the third casualty of last Thursday's election today when she announced she was standing down in the autumn.

Ms Goldie was well liked by the public, but the same public wouldn't consider a return to a 1950s Scotland, when the Tories ran Scotland. Some say she should have held on to see how the ground lay, but after consultation with her party today, she U-turned.  Was she shoved or was she pushed?  We'll never know.

Alex Salmond paid tribute to Ms Goldie:
First Minister Alex Salmond paid tribute to Annabel Goldie, saying he held her in the "very highest personal regard".
He added: "Annabel acquitted herself very well in the recent election, and although her party lost ground I believe they would have lost more had she not been leader.
"I will miss Annabel's distinctive style at First Minister's Questions in particular. I am sure that Annabel still has a significant contribution to make as a distinguished parliamentarian, and she carries my very best wishes for the future."
Murdo Fraser, the current deputy leader, has emerged as the early favourite to succeed her but I don't think Mr Fraser has the skills required to tackle Alex Salmond. My criticism is based upon hearing him talk many times on local affairs - he's one of my list MSPs - when he's been average but hasn't set the heather on fire.  However, there's a few months until autumn and by then the A list Tories at Westminster will have had time to confer.

Therein lies the problem of all Scottish unionist parties; the electorate know their paymasters are London based and therefore allegiances are to the south rather than Scotland.  Also the Scots are becoming aware the unionist parties' Westminster counterparts scorn the Scottish Parliament and the SNP capitalised on this last week. Nobody likes to be labelled second-rate.

London Labour aren't happy with their Scottish branch. Their solution lies here.  Sorry for not forewarning you and you've spilt your morning coffee.
Tweet
Posted by subrosa at 09:30

In today's Tory Party, if you are not a Cameroon cartoon you're nothing!

Who would have thought we would have seen the almost total collapse of the three unionist parties in Scotland. Not only has their popular vote collapsed, their leadership has collapsed, and no doubt bickering and recriminations will further split these parties.
Is it all local and internal, or do their London masters have a hand in all this, we will never really know. Whatever the reason, it is a sad day for Scottish politics.

I find myself having to re-iterate a post I previously made (see: – http://subrosa-blonde.blogspot.com/2011/05/what-now-for-scottish-liberal-democrats.html)

“… much as I relish the SNP’s success I do believe that what is needed is a robust opposition, which, sadly, we do not have.”

All three opposition parties in Scotland are left lacking any charismatic figure within their ranks. What hope now for any effective opposition?

Having followed your link to Underdog; what can I say!

Other than it would be a fitting end to the career of a political gook.

But that said the article has been penned by the Mail - Next headline Man Who Claimed to Have Saved the World Has 'Lost' Britain.

Cameron probably pushed her so that it would look like SHE was to blame and not him. he won't like it that she is the only popular Tory in the country.

She will be a huge loss. i think Alex was right. They will lose more now without her personal popularity.

I don't even know what any of the rest of them look like. I'd never even heard of Murdo Fraser until the las few days.

OR I do hope you've discontinued your fund raising for the party until matters are resolved to your satisfaction. :)

I find myself agreeing with you once again JRB. A smart opposition is important to any government, particularly when there is limited scrutiny such as another chamber (which of course we don't want). The committee system appears to be reasonably effective but it's certainly not a replacement for good opposition.

Aye it is a Mail story Crinkly, but stranger things have happened. :) Part of the problem for the unionists is that their Scottish colleagues are treated like branch members and not a core of the respective clubs.

He's the man who somehow reminds me of a wee laddie Tris, although he's in his 40s.

What I heard yesterday is true 'she's the Tory it's ok to like'. Without her at the helm last Thursday I'm sure the Tory vote would have been obliterated. She worked hard throughout the election and didn't appear to have much backup for media purposes. Liz Smith just doesn't come over well.

I think she was pushed. She spoke a number of times immediately post-election and said she was going nowhere. Someone else clearly thought otherwise.

I read a piece by Kenneth Roy in the Review today which stopped me in my tracks completely. For according to him Labour's vote did not collapse and he appears to back that up with figures. According to his figures 22% and a bit voted SNP while 26% and a bit voted for the others. He says the SNP got the benefit of Lib-Dem voters furious with the Coalition and that there has been no tsunami that cannot be completely overturned in due course.

He has focused heavily on the low turnout and I fully see the need to do that because it is relevant.

I'm still absorbing what Roy is saying. But I'm also wondering why the mainstream media haven't reached the same conclusions he has.

All of these things said the SNP are still in the driving seat: all the more reason for them to mature further during this term with sensible politics and make the most of the position they are in while they can.

*the percentages quoted above are presented as a proportion of the electorate.

I tend to think she was pushed too Jo or perhaps it's just coincidence that the MSM mentioned she announced it after a meeting with her other MSP colleagues.

Hi Jo. Kenneth Roy appears to have taken a 'sober' look at the election. I think his percentages are calculated on the electorate as a whole and not on the turnout where the SNP gained roughly 45% of both votes.

Yes, the SNP need to grab opportunity with both hands and I think that's Alex Salmond's strategy. I very much doubt if they will ever have a similar chance again.

As always Roy's figure are accurate in regard to % of the total electorate.

If memory serves around 52 - 54% was the turnout. This is the hurdle the SNP must truly overcome before they put the referendum on independence to the people.

An honest, hard working and productive government is their best tool for making the inroads necessary to conquer the heartlands of disillusioned apathy.

Re-instil a belief in democracy and its political process and the 'interests' of Westminster will swing from their own petard.

A clear out of all political parties in Scotland bar the SNP. Who would have thought it. More to the point who thinks that the talent and experience needed for each of the opposition parties exists for them to be effective?

If Scotland has changed even temporarily it's fair to say that Westminster politicians and the MSM haven't.

The Tories have nothing to offer Scotland. The LibDems were crushed by their supporters because they showed themselves to be capable of doing or saying anything which would keep them in power.Labour? Their only small crime was that they thought they owned Scotland, enough to fiddle the election process set up by them at the start of the parliament.

Where do they go from here? The only way is up? I'm not convinced of that.

Indeed Pete: Miliband is sending a team up from Westminster to sort out the Scottish situation, led by Murphy. Says it all.

There is a lot of "NO, we didn't REALLY lose any voters" delusional thinking going on amongst the Labour supporters, however, I suggest taking a look comparing the number who voted Labour in 2007 and 2011 and say that again.

You can't. Labour lost votes, pure and simple, whether they stayed home or voted for another party.

Hi SR, read your links, first with disbelief, then with hilarity, as some one else commented, we'll be independent by Christmas. Time they learned a lesson or two. Just how long do they think we will be told that "we are not up to it" (independence),before the Scottish people say, we ARE up to it, and the first thing we will do is STOP supporting unionists who are perpetually "putting down" Scots.
WE have already seen the results of English government. Even G Browns government was mostly English, so who isnt up to it?

It will be a hard task to change voting/non-voting attitudes in 5 years Crinkly, but you're right insofar as only the SNP would have the motivation to try.

I'm not convinced either petem. Somehow I feel the libdems are finished here.

They call it 'positive thinking Jeanne'. Anything can be changed to sound good.

Glad I helped make you laugh Apogee. Makes blogging worth while. :)

JRT there is no way we can ignore the low turnout nationally, and the even lower turnout in many, many constituencies. Kenneth Roy has a follow up article in the Scottish Review today. His take is indeed sobering.

So I'm not sure its pure and simple. As someone who shared your view before I read Kenneth's articles this week I found the figures stunning.

As Crinkly says tho, and Subrosa, Roy has gone with the overall votes cast against the total electorate who could have voted. I agree with you that Labour did indeed lose votes in some constituencies but overall Roy has provided the figures to show that their vote didn't actually collapse. Turnout is key here I would say. His main point, and its a valid one, is that pretty much half of Scotland didn't even vote.

And isn't it a worry that so many in Scotland find it ok simply not to bother using their vote?