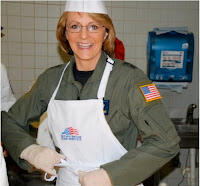 Serving Thanksgiving dinner
to staff at Ramstein
As the US attempts to display its democratic credential and conveys the false impression that it has joined the Arab masses by attacking the one country in the entire region where a democratic uprising will not jeopardise US interests, I thought Major General Margaret H Woodward, who has been the Commander of the 17th Air Force and US Air Forces Africa at the Ramstein Air Base in Germany since June 2010, may interest those of you who enjoy detail.

The command serves as the air component for US Africa Command and led the military operation against the Gaddafi regime.  The Spiegel has published an interesting interview with this capable lady.

Has the 'transfer' of power to NATO taken the heat off Obama?  I think not.  NATO is dominated by the US militarily and politically and the US continues to 'runs the show that is taking over running the show'.

While Britain and France continue to berate other NATO countries for not contributing hardware to the no-fly zone operation, they are but cogs in the wheel.

US NATO did not launch a war against Libya as a humanitarian gesture.  If/when it removes the Gaddafi family from leadership and installs a replacement, the allied military coalition will exercise decisive influence for many years to come, especially in oil concessions, privatizations and building contracts that enhance multinational corporations, world organisations and more.

Well, that'll be BP out of Africa (well this part) so to speak

I expect so Dram. The person I know who works (ed) for them over there says there's little chance he will return.

There are wars and there are wars. Really nasty ones tend to be tribal/terratorial. All other wars are about supporting a particular country's economy and the companies that fund the political wheels.

This one unfortunately is a combination of the two SadButMadLad.