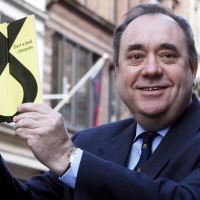 Yesterday, in an old haunt of mine the Royal Scottish Academy of Music and Drama, Alex Salmond launched the SNP manifesto.  It was a slick, confident performance from the First Minister with proposals which should energise every Scot.

The document is lengthy so I will highlight some pledges I think may interest those of us who are retired or semi-retired.


The section on justice will be efficiently frisked by the Peat Worrier and I will refrain from commenting on the education proposals until I have had discussions with those at the sharp end.
It is a pleasure to note that the SNP realise jobs require to be created by the private sector and they don't fall out of the sky as Iain Gray, in his latest PSB, appears to convey.
There are sure to be pledges I've missed but I had difficulty downloading the PDF last night although the low-resolution copy was no problem this morning.  It can be viewed here.
Tweet
Posted by subrosa at 09:55

It's a good list, and is more comprehensive than the list reported by BBC Scotland last night. It was interesting to see Salmond berate Westminster politicians for their use of PFI in the Health Service, yet not a peep about how PFI has crippled the Education system in this country (inflicted by the 2003/7 Labour/Lib Dem administration on mostly Labour councils).

No reference to the elephant in the room though - the cuts in the block grant to come. What is to be sacrificed to reach these aims. I don't think the cuts were even mentioned. Is that a good thing? Suppose its better than Labour's unatainable "We'll protect you from the cuts" mantra - buut a reallity check is seriously required from the candidates before I consider who to vote for.

Some good stuff in there. (I know, I know! I surprised myself too!).

Does the manifesto say that Scotland will run (and keep running) away from the EU?

If it does they have my vote.

No the SNP are pro EU. If you're against the EU you need to vote BNP/UKIP!

Thank you Allan. I didn't have much time to read the whole lot but these impressed me.

The cuts - ah the cuts. No politician is going to talk about them but I'm feel confident the SNP will handle them far better than London led parties.

Ranty, the SNP support the EU, but it's not the end of the matter. All politicians must be aware that the public, even in Scotland, are beginning to question our involvement.

Of course we can only get out if we become independent or England decides to get out.

Plenty time to argue the case.

Ah Strathturret, we have to differ there. But I enjoy hearing your argument.

•The 25% reduction in senior NHS managers over the next parliament is particularly good.

One good reason for not voting Labour is PFI which "has crippled the Education system."

And I regret the apparent cover-up on Lockerbie by the SNP (the evidence in the trial was apparently faked by the CIA); and I regret the Westmisnster SNP's support of the No Fly Zone over Libya.

With Scotland's great oil wealth it should be possible to improve our rotten transport system; I can find no mention of oil wealth in recent SNP leaflets.

It is Aangirfan but I haven't heard it mentioned in the media.

Our education system needs a serious overhaul and the PFI money would have done that. We need to stop educating all children under the same roof because the roofs don't provide enough space for all basic subjects to be met ie vocational.

There was a bit in the manifesto I think but I've yet to get to that. Too much sunshine keeping me away from the Mac and I can't see the iPad in it. That's my excuse. :)