Holed Below The Waterline 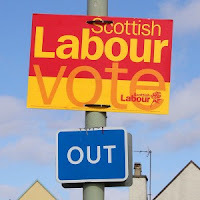 It was trailed as 'a major change in strategy' when the beleaguered leader of Labour in Scotland relaunched his party's election campaign by preaching to the converted - his own supporters.  Iain Gray's problem is his party has no strategy to change.

Until now Labour has focused on 'Tory cuts' until last week when they suddenly realised they were receiving little enthusiasm from the voters who know the current state of the economy is due to UK Labour's mishandling over the past 10 years.

So yesterday Iain Gray decided to try another tack: 'Alex Salmond's only plan is a plan for separation'.  Oh dearie me, it's becoming embarrassing to listen to his interviews, but all is not lost.  The heavyweights are visiting Scotland this week in the form of Milliband and Balls who will be accompanied by the destroyer of the UK economy, Gordon Brown.

The very thought of the three Mouseketeers on the ill-fated Labour campaign trail will have the SNP riveted with fear nae doot.  Unfortunately for Labour, yesterday's performance was less like a relaunch and more like a distress signal.

If enthusiasm, commitment and dedication were to be counted on 5 May, then the SNP will win hands down.  My only concern is the postal voting 'system'.  All I can hope is that the SNP's scrutiny is par excellence.
Tweet
Posted by subrosa at 09:12

Why do the unionist parties insist of importing their "big guns" (huh) from London for a domestic election?

What is it to do with Balls, an Englishman sitting in an English constituency? Are they admitting that if Labour were to win, policy would be made by London?

Can Labour not manage to find a "star" from Scotland?

Laughably the criticism was for a presidential style of government, supposedly carried on by Salmond...when Mr Cameron took part in American-style presidential debates only 12 months ago?

Either they all think we are incredibly stupid or they are just amateurs.

I’m pretty sure that the postal votes scam is being watched carefully.

I have quite a dilemma as a Unionist. I loathe our Westminster EU puppets and admire The SNP enormously! As for postal voting, say no more. if Labour can fiddle they do.

You should be delighted to have a state visit from such august persons as Balls and Milliband.
Indeed if you ask nicely we will be really generous and allow you to keep them. Actually you can keep Izzard too as a bonus :-)

Cameron of the brass neck titanium brain and sparkling repartee.

Robertson's question was on a serious topic mainly the proposed closure of the bases at Lossiemouth and Luechars, the effect these would have on the communities and the fact the closures would have a disproportionate effect on the distribution of defence spending in Scotland.

Cameron's retort was to the effect - If you guys get your way on separation; the only thing you will be flying is by the seat of your pants!

I have to wonder whether a similar question posed by a conservative colleague or even an opposition MP for an English constituency would have received such a contemptible response?

Big hitters from London? I think you have to add an 's' to 'hitters' for it to make any sense.

Crinkly...
It WAS raised at a following PMQs by the member for Marford(?)another RAF base. She got a considerate reply from Cameron who said she had raised an important point. I think she is a Tory...

Cameron does not GET Scotland.

I don't usually pay much attention to Scottish elections but I await eagerly to see how many Scots vote to be kicked in teeth by Labour, yet again.

Cameron didn't have an answer for Angus. Well, he did of course, but it would ahve gone something like this:

"You Scotch people had your chance; you didn't vote for us, so you blew it. We actually don't give a damn what happens to your bit of our country as long as you maintain good roads to and from Balmoral for Her Majesty, and the grouse moors are kept stocked. You see, you fools. You should have voted Tory."

I've just watched the end of the Politics Show tris and the wee man Willie from Glasgow represented Labour. It was all MPs speaking and no MSPs.

Labour will vote against an independence referendum and so will the tories. Menzies Campbell didn't answer on behalf of the libdems.

Oldrightie, I think you should move to Scotland, although we don't do thatched houses here. There are plenty gardens which need your wife's expertise too.

I'm not delighted Woodsy - does that make me a mean spirited woman? I hope so.

I read that in Hansard. Angus Robertson works hard on his brief and is regularly insulted, although he does eventually receive the detail he requested.

Strangely enough I was told earlier my spelling wasn't up to its usual standard. :)

Oh banned, you have to follow the next 8 days surely. All the excitement is here while England argues about minimalistic changes to a voting system. Boring.

Ah Tris, so that's why the Ballie Bridge has had a bypass on the A93. Rather nice new piece of road it is too. :)

Politicians of ALL parties must fight to get this drug banned.

Yep! chuck in a dollop of separation from the UK fear A Smattering of royal wedding fever a splash of Salmond being a mad Nat leader intent on total destruction
chuck in to a large pot stir well with Unionist MSM and finally add a massive splurge of postal voting
leave till May 5th and open up cake.

Yummy its a Iain Gray Cake

The lot of them just said on NN Scotland they won't back it. McLetchie claims they won't because a majority in the parliament are against independence and therefore so are a majority of the Scottish people!

Kerr claims that Wendy meant it despite the fact that both Wendy and Gordon MacNeill confirmed after her "Bring it on!" jibe that she was bluffing. (We also all know that Brown kicked her butt at the time for even saying it.)

Strangely I was discussing that drug just last night Hellraiser and we all said the same. I'll do a post about it perhaps.

I've heard unionists saying only between 15-35% of Scots support it Jo. Wish they could decide don't you?