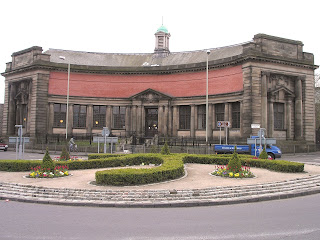 Coldside Library, Dundee (pictured), with its long single storey curved frontage and elaborate ends - which still today remind me of bookends - is where I discovered my love for books.  To a young child it was an imposing building designed in 1904 by the City Architect of the time James Thomson.  He thought that neo-classicism was the correct style to maintain civic dignity and he had particularly idealistic views about leaving beautifully planned cities for future generations.  Such a shame his successors weren't of like minds, but that's another story.

I can recall my first visit in the 50s.  My father suggested I may like to go with him on his fortnightly visit and I jumped at the opportunity, because I was also told I just may be able to borrow a book if I behaved.  In those days children didn't have library tickets and books had to be borrowed on a parent's ticket.

En route my father must have told me several times that I should not say one word while we were in the building or we would be asked to leave.  The place sounded like something between a school classroom and prison but I was still anxious to see inside. The interior was breathtaking; what seemed miles of shelves decorated the walls with the exception of a corner which was equipped with what appeared to be back to back rows of school desks on stilts.  Running down the middle of the desks were lamps from which light arched precisely to the lower edges of the desks. Only later did I discover this was the 'reading section' where the public came to read newspapers and an international selection of professional journals.

For years I used this library and became a trusted book borrower; so much so that I was able to visit unaccompanied by a parent, although I had to produce one of their cards.

However, much as I treasure these nostalgic memories, there are changes afoot to libraries and other public buildings in Dundee. The city burghers are to set up a charity, to be named Leisure & Culture Dundee, to take them over.  The plan is to go before councillors next week and if the go-ahead is given, and I'm told it's already rubber stamped, the Office for the Scottish Charity (OSCR) will be asked to confirm the proposals.

Some of my Dundonian friends suspect this new charity is purely another quango and abuses the term charity, because all funding will come from public funds.  It would seem the main difference between it (the Scottish Charitable Incorporated Organisations) and non-incorporate charities is that it is a legal form which offers some protection to charity trustees from personal liability.

My gripe is the use of the word 'charity' in connection with taxpayer-funded public services.  I consider charity to mean a particular type of voluntary organisation which has a distinctive legal form and a special tax status.  This new charity doesn't meet that definition so I expect it can be added to the list of Fake Charities. There must be some benefit to local authorities but I haven't found out what it is as yet. Only time will tell, but the burghers should be aware that Dundonians will be keeping a close eye on this development to ensure it involves no extra outlay.

Glasgow 'out sourced' their public services a few years ago.  It hasn't been much of a success.  I wish Dundee would explain why they're doing something similar but under a new label.

"My gripe is the use of the word 'charity' in connection with taxpayer-funded public services. "

I believe the rationale is basically tax-avoidance. Charities enjoy beneficial treatment re rates and VAT.

Unless the organisation can call on significant voluntary involvement and raise some funds itself, it's a con and likely to run into trouble.

My personal (unpopular) view is that charitable status should be abolished altogether. The Income Tax benefits compel me (and all tax-payers) to contribute to every charity, whether we approve of it or not. Also, the rates concessions are a factor in pricing small businesses out of our high streets.

Certainly charitable status should be reviewed Hamish because, as you say, it should involve a majority of voluntary personnel. I do see your point though.

I was an avid user of my local library though it was not as imposing as Dundees, standard 1960's municipal brick and glass.
I think that my library pass was probably the first bit of paper that identified me as 'me'.
I only stopped going there when, as a late or mid teenager, I began to be able to afford books of my own.

On the subject of charities, I recently met a student who was whining that she had to go back during her holidays as she had to work. Turns out that 'work' was chugging in support of something ir other. Call me naive but I always thought that was done by volunteers, not salaried employees.

"In those days children didn't have library tickets and books had to be borrowed on a parent's ticket."

Ahhh, I remember those days well! :)

Most people still look upon charities in the way that people always have, as organisations funded by private donations and run by volunteers. As a result, we tend to be generally in favour of what they are doing, still tending to think that they know best because those working for the charity have a personal interest in the subject. We tend to believe are probably experts in their chosen field, and even if we disagree with something they are doing, we tend not to be too critical. If they make a statement on a subject, it is more likely to be accepted than one made by a council spokesperson.
It is these generally favourable public conceptions that gave birth to the fake charities which are simply another form of quango. Be highly suspicious of what is going on!

Quasi, quango's posing as charities - claim to lobby governments while acting as spin doctors to the media by lobbying for the government.

Have moved out of day care provision and increased their executive overheads in preparation for going commercial - selling insurance products etc., and care services.

They have achieved nothing to boost or even preserve the living standards of the elderly. Haven't fought for a decent state pension or against the recent cuts in winter fuel allowances. In fact, instead of lobbying governments they are a tool of subterfuge for governments.

Not the people who man the front line - they're simply making the best of a bad job - but the executives and trustees are either fools or get a sense of satisfaction out of fooling others.

I must be naive too banned as I can't see how this will save money at all.

The problem is EP, people hear the word charity and associate it with the kind of organisation you mention. How do we stop that?

Oh Crinkly, you've hit upon the charity which really opened my eyes. I know the retired boss of it and it was only a few years ago, listening to a talk she gave, that I realised she ran a government department not a charity.

Spot on Subrosa. Glasgow was the first to latch on to the "charity" thing. It hands the facilities over while retaining control and with charitable status it also accessed grants from the Lottery Fund! Shocking stuff and something the Lottery Fund was never meant to be used for.