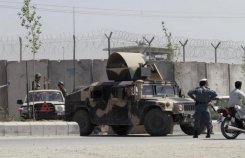 Approximately 500 political prisoners - many high profile Taliban fighters - escaped from Kandahar high security prison during Sunday night and early Monday morning. To date only 65 have been recaptured and two have been killed in a gun fight.

We are told these barefooted men crawled to freedom down a 1,000ft tunnel, which originated in a nearby safe house. Why would nearly 500 men leave their footwear behind?

Regardless of the escape details, it was a well planned project which could have only succeeded with 'inside' help.

Karzai's office called the breakout a 'disaster' ahead of the summer fighting months and as NATO and the US begin preparing for a gradual withdrawal.  The justice minister Habibullah Ghaleb, in a letter to Karzai, laid much of the blame for the mass breakout from Kandahar's Sarposa jail on failings by Afghan security forces and foreign troops.  I can find no evidence that the prison was staffed by foreign troops so Mr Ghaleb's letter would appear to be a 'nothing to do with me' missive.

General Ghulam Dastgir, the governor of the jail, said many of the prisoners still on the run had likely fled to safe havens in Pakistan.  That's the same Pakistan which recently received an extra £650m from David Cameron, courtesy of UK taxpayers, for 'educational' projects.

Whether these men are in Pakistan or the Afghan mountains matters little, the fact they are at large matters a great deal but our media are so engrossed with hyping up a wedding and giving up front page space to a fool who admits his legal actions were 'excessive', that most have ignored the seriousness of this incident.

We have lost 364 of our military in the war against the Taliban and poured £billions of taxpayers' money into the Afghan government's coffers in an attempt to change their corrupt culture.  Is it any wonder their government is in chaos when we're guilty of such bribery?

With around 400 insurgents now roaming free and with little hope of their recapture, our troops are more at risk than ever, yet our politicians are reluctant to make any statement about the severity of the situation.

This security breach comes just months before the start of a transfer of responsibilities from foreign to Afghan forces. The coalition should insist the transfers should be speeded up and also make arrangements for our troops' withdrawal to be accelerated. If David Cameron had any backbone he would halt the flow of cash to Karzai's government.

Update:  Thanks to my eagle-eyed reader JRB, recent reports say an Afghan military officer opened fire on foreign troops today after an argument at Kabul airport.  The Taliban are claiming responsibility.
Tweet
Posted by subrosa at 09:02

"Why would nearly 500 men leave their footwear behind?"

"If David Cameron had any backbone he would....."

Immediately withdraw all our troops from Afghanistan.

For four and a half hours Joe and in the middle of the night? Mmm.

Our troops must be heartily sickened by this. Day in and day out they put their lives on the line, and for what – a complicit and corrupt regime.

Is our government blind, foolish, naïve, or do they simply lack the moral courage to say – Enough is enough, and bring an end to this nonsense.


Latest:-
I now read that (not for the first time) a so-called highly trained Afghan Officer has gone on a shooting rampage killing coalition troops at Kabul airport.

We have to stop financing them JRB, that's the first step.

Thanks for the latest, I hadn't read about it but I now have a link thanks to you:

"Why would nearly 500 men leave their footwear behind?"

Because the 'safe house' was a mosque perhaps?

Afghanistan is a tribal country and it is plain idiocy to try and impose a western type of democracy. I'm in favour of the "divide and rule" technique which was used in the days of the British Raj and in Africa, you gave tacit support to the tribes which were on your side, but allowed the tribal leader to run his area in his own way, only intervening if he was "getting too big for his boots".
Bribery and corruption are a way of life, and even if they reach an agreement, they are quite happy to break it without hesitation if something better is offered, using the almost universal excuse of Muslims, "Allah told me to do so" - and who can argue with Allah!

A tunnel of that length? And nobody noticed? And no sensors? How many of them will turn up soon in London?

Time to get home, time to let them live their own lives in whatever society they want, time to stop kidding ourselves.

Never thought of that Woodsy. It would make sense though.

I'm sure I could manage to argue with Allah EP and you could too. :)

Too many I should think Demetrius with the remainder already planning to kill further troops.

Well said Dram. It's the politicians who need to stop kidding themselves and trying to kid us.