There's A Change In Scotland 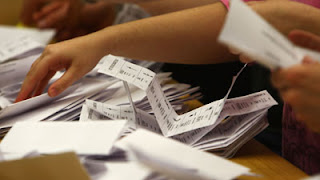 There's a change in Scotland; not a vast change but significant enough to show that the Scots may be awaking to the domineering attitude of the UK coalition government.

The Westminster government's Alternative Vote referendum takes place on the same day as the Holyrood elections because it also coincides with English council elections.

In return the Scots seem to be completely disinterested in Nick Clegg's efforts to ensure his party are always in government, although the small sample I've polled - 23 people to date - say they will put a cross on the ballot paper. None will vote yes.  When I asked why nobody was in favour of AV the answers varied from 'It's tinkering at the edges' to 'We need STV and we should have it in the Scottish parliament as well as for council elections'.

Some time ago in the Scottish blogosphere there was a suggestion that the Scots should spoil their papers and write 'Independence' across them, but when I've mentioned that to my tiny voter sample the answer was a firm no.

What is interesting about the 'av or 'av not referendum response in this part of the country is that it has some of the highest numbers of tory voters in Scotland and I know quite of few of my sample are tories.  Unfortunately finding a libdem voter here is rather like finding a steak on the plate of a vegetarian.

My deduction, for what it's worth, is that slowly - oh so very slowly - is Scotland beginning to realise just how we are controlled by Westminster.

If I had polled my 'irrelevant' sample today I doubt if their opinions would have changed.  Here in scenic Scotland the purchase of fuel is a necessity not a choice and it would be ludicrous for the Scottish government to subsidise the little public transport we have at present.  As for Mr Osborne's actions on pensions - they don't apply to current pensioners so once again I'm ignored.

George Osborne wants anyone who will pay inheritance tax - should most of us be so lucky - to give 10% of their wealth to charity, then he'll reduce the tax accordingly.   I sincerely hope all Scots, who have bestowed charitable donations, realise this is smoke and mirrors, but those who do have elderly parent(s) should let them know they may well fall into this group as the cost of property continues to stay stable here in Scotland.

How will I vote in Nick Clegg's referendum?  No.
Tweet
Posted by subrosa at 20:14

"Independence" as I can't spell X.

Spread it at will.

How I wish we could attach that letter to every ballot paper CH.

There's a lot of people in England who want independence as well. And our own parliament, equal representation, free university tuition, prescriptions and care for the elderly. I wish Westminster could afford to spend as much per head on English people as others less fortunate. But independence without leaving the EU would just be like having the same prison cell but with an empty bunk.

SR,
I must confess that with a troubled conscience; I will for the first time in any election in which I have voted, deliberately spoil my paper.

To vote for either option gives this highly questionable and disingenuous referendum a credulity which it does not deserve.

I believe that this AV vote is been foisted upon the electorate, not to serve a genuine democratic purpose, but merely to act as a political sop in order to massage the egos of Mr Clegg and a few of his LibDem colleagues. That is so very, very wrong.

Hi SR; having seen the strange results in some Australian elections and how in one case the result was rigged, I do not see any gain with AV over FPTP except for certain electronic voting companies and associated labour lord(s).
Understand that however the vote is counted, we are stuck with it for five years, with no come back, so we had better get it right.
And what do we know about the member we elect,or the party, or their organisers, How straight are they, remember that party manifesto's are nowadays more a work of fiction,than a legal document. Was it not Joe Stalin who said "who counts the vote is more important than how its counted"
With postal voting and the strange happenings at Glenrothes in mind,we should consider these matters carefully.

Why can't Westminster afford it Brian? We have extra here because we must provide for sparse, widespread communities which you don't have down there.

One example - now suddenly England has decided they can freeze the council tax. The SNp government did that here 4 years ago.

So it's not impossible.

JRB, that's the very reason I'm going to vote No. To spoil my paper could well give Nick Clegg's ego a Yes boost.

Yes indeed Apogee, you're right. With AV here I still don't have a clue about who my list MPs are and I've never seen one of them to my knowledge.

I'd rather it stayed the way of the status quo at present.

Subrosa, agreed. Perhaps the absence of an English Parliament is the reason? Or would an increase in population density in Scotland help balance out the disparity? England has had a much greater percentage of her green and pleasant sacrificed to accommodate people and industry.
I'm all in favour of people bettering themselves and doff my cap to the SNP for putting Scots first.
May I cheekily broaden the topic and ask if there are any perks that English people have that Scots lack? If they were addressed, maybe the calls for independence from all quarters would be silenced.

Now let me think Brian - what perk would a 92% majority have in a dysfunctional union ruled for the benefit of a minority establishment?

Therein lies the answer Brian. The SNP are putting Scots first, Westminster is more interested in posing on the international stage at the cost of the people.

I don't want the debate for independence to be silenced. :)

So the English people derive no benefits from the Union. Indeed we are the biggest losers in a system that only benefits the political elite of the Union who favour quantity over quality and whose attempts to bribe our neighbours to stay together just leaves them disgruntled. As there's only 8% diffence between England and the United Kingdom, independence would only slightly affect us. And Scotland, Wales and Northern Ireland would prosper as niche or boutique countries trading on the talents of their people. Many thanks Subrosa and Crinkly, you've got me thinking. To quote Sam Goldwyn, include me out, because I really like the idea. Let's hope it happens as smoothly as the Czech - Slovak Velvet Divorce. :-)

Oh I do think you receive benefits from the Union Brian. Just think, if Scotland had been independent in the 70s - remember the rigged referendum? - you wouldn't have had the benefit of North Sea oil. That's kept the whole of the UK afloat since the early 80s.

Brian, I really do feel the Union is finished. We're all in the EU's hands now. That's the modern Union.

Ah, the wicked 40% threshold which scuppered the marginal majority. And the notorious McCrone paper.
Reading the Independent article, the failure of the 1979 devolution referendum perhaps saved Scotland from CIA intervention to protect US oil company interests.
Many thanks for inspiring me to read further into the subject.

I'm please our discussion has resulted in you perhaps being a wee bit more aware of the political scene in Scotland Brian.