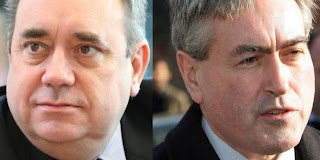 After Tuesday's fond farewells at the end of the third session of the Scottish Parliament, the Holyrood election campaign began with a whimper rather than a bang, although admittedly it was overshadowed by the UK government's budget yesterday.

We have been subjected to unofficial campaigning, by all parties, for months and I wonder if there will be any surprises when they launch their manifestos.  Will Labour continue to steal SNP policies or will they manage to construct some of their own?

Will Annabel's campaign chatterings continue to echo her pre-campaign mantra: 'Without the Conservatives policies that put 1000 extra police on the streets and gave the council tax freeze would not have been passed'.  I should think every man, woman and child in Scotland knows that by now, but will they be impressed enough to vote Tory?

The Libdems didn't have a good day yesterday when around 2000 students gathered at Holyrood to urge politicians to rule out fees, protect college places and improve student support.  They were addressed by politicians from all the parties except the Conservatives, but LibDem spokeswoman Margaret Smith struggled to be heard over loud jeering.

It's long been said politics and religion shouldn't mix but that hasn't deterred the Moderator of the General Assembly of the Church of Scotland, the Right Rev. John Christie and Cardinal Keith O'Brien of the Roman Catholic Church, from launching a rather smart new website Churches Vote, aimed at bringing denominations together.  It is encouraging churches to organise local hustings - a good idea, although some may say hustings are old-fashioned.

There are 41 days until election day: Alex Salmond remains as First Minister until then.  Plenty time for a few surprises.
Tweet
Posted by subrosa at 09:24

OMG – 41 days of a daily dose of twaddle and drivel – can hardly wait.

As my auld grannie used to say when we kids started squabbling – ‘It will all end in tears’.

I have to admit JRB, I can't muster much enthusiasm for this election. Perhaps as the days go on...

Even if you can't get enthusiastic about the election it's good to see Dundonians getting political. I always thought the highlight of political activism in Dundee was the message on a wall in Douglas saying "Fuck you Maggie, we won't pay!"

Evening Stuart. I don't live in Dundee although I was born there, but I remember visiting and seeing that sign all these years ago.

It's still a very militant city Dundee. Quite took me aback when I returned to Scotland that a place riddled with so much poverty seemed to do everything to avoid improving.