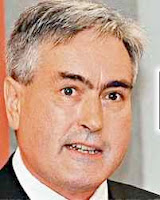 Lord Steele and George Reid are to investigate a prison escape complaint made by Ian Gray.  The complaint has been referred by the First Minister to a panel comprising of the two former Presiding Officers.
Labour has accused Mr Salmond of an inexcusable failure to mention, in Holyrood exchanges last Thursday, that inmate John Brown, serving life for murder, had absconded the previous day from Castle Huntly open prison near Dundee.  The exchanges concerned an earlier absconding by a different Castle Huntly prisoner who handed himself into police after a week on the run.
In a letter to Mr Gray, Mr Salmond said: "I believe your complaint to be publicity-driven rather than procedural, and pursued without any solid basis whatsoever.  However, I set up the independent procedure for the purpose of referring complaints to the panel of former Presiding Officers.  On that basis I have made the reference that you requested to the panel."
What a waste of public money.  Labour are so devoid of policies that the only way they can substantiate their presence in the Scottish Parliament is by behaving in this immature manner. We know Alex Salmond had complete support from the police service for not making any public statement prior to their own, so what does Ian Gray expect to gain from this?  It certainly can't be votes.
Tweet
Posted by subrosa at 09:38

I said it before, the man is a pygmy amongst others.

He has no policies except those passed on to him by No 1.

At the moment the monocular one is rather preoccupied so, Gray Flannel and Soap needs to be seen to be doing something, however stupid. It just shows how limited he is.

I think his jaikit is on the shoogly nail aside Broon's.

It's such a shame labour don't have anyone with even a modicum of authority to lead them. Aye Billy, time labour disbanded and started over. Maybe that's not far away now.

Labour are acting like a wounded animal and that is when they are at their most dangerous.

I totally despise Iain Grey and just about anything he says. The man is a bad tempered spiv hellbent on causing trouble and people ask me on my blog how i prefer the Conservatives ?

I prefer the Conservatives because my total lack of respect for Labour north and south.

I hope this panel clear Alex Salmond and yet again this appalling man will be made to look like a fool.

Oh yes my shunt towards the conservatives is born out of my dislike for Labour.

Aye Billy I'm just listening to Sky News. Surely we must have an election now but Sky are saying it's all on the reshuffle.

I've never been keen on labour Spook, not since, many years ago, I became aware of how the unions use their members purely for their own ends (with very few exceptions).

In Scotland the Labour Party is a single issue pressure group whose solitary objective is preservation of the Union. Beyond this they have no agenda, no policies, no ideas and no interests. They are drones, piloted remotely from London, from whence are transmitted instructions which they do not possess the circuitry to disobey.

Gray looks and sounds like some sort of crazed android from a kids' SF show, except you can always see the strings - Supermarionation, it ain't. Way back when IT was called Data Processing, we called gadgets like Gray 'dumb terminals'. They do nothing, merely displaying information generated elsewhere. Political terminals don't come much dumber than Oor Ian.

The last instructions that Ian downloaded from London ordered him to heave large amounts of random mud at Salmond in the hope that some of it will stick. Some of it will, no doubt. But I (like you) will be out asking voters if they want an android under alien direction as FM - or a real person, albeit a slightly muddy one.

It's all rather sad Vronsky. We need an effective opposition and labour don't provide that.

Your assessment is excellent but I doubt if much mud will stick with the average voter. Too many see through today's dumb terminal.

Of the top of my head I can think of three vexatious and trivial complaints this Labour mob have made against Salmond - all were found to be without substance. Add to that, Foulkes's futile questions and we have an expensive waste of time and public funds.

It's time Elmer Fudd grew up and took his futile complaints with him. The man is a typical Liebour no-brainer, put in as canon fodder aginst a progressive SNP government.

It's the wast of time and money that these things take up, all for some sort of party political advantage that really annoy me.

Question: Why can't this bunch of no hopers get over themselves, accept that they lost the last election and get on with the job of constructive, grown up opposition?

Answer: Because they are controlled from London by a man with a maniacal hatered of the SNP and Alex Salmond. Simple.

Do you think we should have a line-call system like in the tennis.

Only 3 Challenges to Hawk-eye per set, unless of course the challenge is upheld, then you don't lose a 'life'.

On 2 June 2009 BBC Scotland Newsnight ran a story on MP Devine's expenses claims but at the point where Newsnight Scotland reporter Kenneth Macdonald was detailing what Devine had allegedly done you couldn't hear what the reporter had to say because of a sudden explosion of extremely loud background music which drowned out his words completely!

Could this have been a deliberate act by New Labour's acolytes within BBC Scotland in order to prevent us hearing what Devine has been up to?

You're right of course Brownlie and the first one had Alex Salmond set up the two ex POs as judges.

He's still not been to the Glasgow art school for public speaking lessons either Lochnagar. Terrible speaker he is too.

Exactly tris. I really think Brown should be in the Priory too.

Ha ha Jim, now there's an idea. It's the waste of public money behaving like this that angers me though and I'm sure it does others.

Hello Marian, I heard that too! I was going to complain to the BBC but that's such a waste of time. Of course it was intentional or the presenter would have apologised - wouldn't he?

So... Has oor Eck been an affront to the dignity of Westmidden's shirt tail lifter then?

Ah would have thoucht yon grey man would have been better off being affronted by the behaviour of many of his partei kameraden, what with their exagerated considerations of their own selve worth, their incompetence, their lack of integrity and their so called selective forgetfulnesses.

... but there ye go. Still ah suppose yer man does what he does best, but for how much longer, one has to ask. Indeed, in these troubled times his branch office employees may well be considering their future prospects. Another profession beckons, perhaps.

As ah see it, being a Westmidden shirt tail lifter doesn't appear to have very good prospects at all.


...and while we're on the subject of shirt tail lifting.

It appears that yon, nice Mr Cameron chappie and his crew of chancers have recently been more successful in the oldest profession in the world( of selling ones-self) than Broon and his cretins have been of late.

Enter Cameron, newly recognised as the next shirt tail lifter general by the 'money talks' folk.

Ah wonder if Channel Islanders would be as keen to vote for yon Cameron chancers if they realised the identities of whom precisely, have been vigorously investing in Cameron's travelling circus recently.
.

Aye indeed Tom. I'm involved with the Kaupthing, Singer & Friedlander Isle of Man scandal and names have been mentioned several times about those sticking their money into Cameron's travelling circus. I wonder when the press will expose it?

It appears that the Telewag is reverting to it's form of old and transmogrifying into the good old born again, Tory rag.

That wee crusade of shock and awe, my yon's disgraceful by way of impartiality on which Westmidden brand was worst was a con of the first order.

Aye, true enough that some Tories were fingered.

...But they were the ones that were expendable.

After all, money folk like to have their money's worth ... and then some. Ah mean to say, what's the point in investing in some Westmidden folk with little expectation of a worthwhile return on their investment. Come then as now, there will be plenty of Westmidden folk willing and able to resume beezness as usual with the money folk.

Within the 'revised' Westmidden rules of doing absolutely nothing criminal whatsoever, naturally.

I remember many many years ago Tom being told that 2 MPs were about to be declared bankrupt but the whole place closed ranks and bailed them out. Never did discover the names.