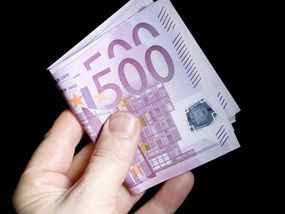 What was regarded as a slip of the tongue by the European Commission president Jose Manuel Barroso a few months ago now seems to be much more truth than fiction.  Mr Barroso claimed Britain was "closer than ever" to joining the Euro.
Whitehall departments are spending time and taxpayers' money updating their plans for the switch from the pound to the Euro and each department has a named minister in charge of the process.  Detailed talks have taken place in departments about what they would have to do if Britain joined.  They include explaining to the public how the move would affect their council tax and business rate bills and how the BBC would pay for the £10m cost of changing the TV licence fee to Euros.
Details of how the government is paving the way for change were extracted from ministers in answers to Parliamentary questions.  Today a ComRes survey for the Taxpayers' Alliance reveals that just 28% of the public think Britain should join the Euro with 68% opposing the move.
Although I'm not against joining the Euro, this is not the time to even consider taking such action.  Our currency needs to be far more stable for one thing.  Is Gordon Brown thinking taking this action will deflect from the mess he's made of the country's finances?  Weren't we promised a referendum on joining the Euro?  Whatever his motives are, we can now safely assume they are not in the country's interests.
Tweet
Posted by subrosa at 01:20

It would be an excellent vehicle to disguise rampant inflation.

Exactly OR. I was thinking back to when Eire changed over and that very thing happened.

Well, although I think we'd probably be better off with the Euro, I agree that this is not the time.

As usual there will be an ulterior motive with Brown, something to diguise his mistakes or make him look better. Like anything could.