Schools May Be Breaking EU Law 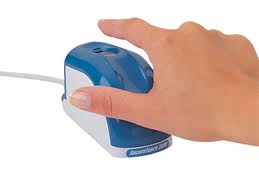 This post is also relevant to my non-Scots readers as this system is used throughout the UK by 3.500 schools.

Recently in this area there has been much discussion about Angus Council's use of biometric fingerprints for school pupils.  The system allows them access to school meals payment and school libraries.  In Angus schools it has been in operation since 2001 and it operates in 68 schools Scotland wide.  Last year the Scottish government published guidance notes on the subject.

According to Peter Nield, the convener of education in Angus council, biometrics are here to stay and parents have the right to withdraw their child from the process.  He would like the system extended to all services and even linked to a PIN for credit/debit card sales.  Since he had a letter published in the Scotsman this week the debate has grown like Topsy, with parents and others protesting.

This morning there were two responses in the Scotsman, both by Doctors and both pointing out the dangers of this form of identification.  I'll quote a short piece of one letter.  Both can be read here.

It is telling that banks rely on plastic cards (tokens) and personal identification numbers (secrets) rather than customers' biometrics to authorise transactions.

Unlike tokens and secrets, biometrics cannot be revoked and re-issued after they have been compromised by fraudsters.

Biometrics are easily compromised. Fingerprints, which are most widely used, can be lifted from glasses that people have handled, from laptop computers they have touched, or from many other surfaces. Forensic scientists working for the police have demonstrated this for decades.

...But regardless of the limitations of biometric technology, many people feel a deep unease about fingerprinting children; teaching them that it is normal to identify themselves to the authorities at every turn. Mr Nield may be happy to carry an ID card, have his irises scanned and submit to arbitrary DNA testing, but he must recognise that his view is a minority one. This is not what we should be teaching schoolchildren about the society they live in.

Many of you will know I have little respect for the EU but the Telegraph reports the invention of the European Commission on this matter as it has taken up the case of a Scottish father who has battled education authorities for years because his daughter's fingerprints were taken without permission.  The EC has demanded that Britain justifies the widespread fingerprinting of children in school because of 'significant concerns' that the policy breaks EU privacy laws.

Please read the Telegraph's article as it augments the father's fight and how he was thwarted by those who should be protecting the public. This 'processing' of our children has to be halted.  I wonder if the Scottish government will also be keeping a close watch on the results of the EC's intervention.
Tweet
Posted by subrosa at 19:51

The problem with these school fingerprints is the disingenuous reassureances parents are given. They claim that the "fingerprint" is converted into a "number" by an internal algorithm. Thus, they say, the fingerprints cannot be stolen or misused. This is only true if the the machine that read them is inaccessible to whoever wants to snoop on the children. I can just see the police on fishing expeditions accepting a refusal by a school authority to allow tham to run their samples through it. The numerical conversion is a red herring, and any teacher who thinks it isn't should be on the other side of the front desk.

Telegraph link not working for me :(

With any luck this will make parents look into the vast amount of highly personal data gathered and stored under eCare, Girfec and other initiartives and how this and the biometic data links with the citizens account and entitlement cards.

Thanks for highlighting this - once people see how it all joins up they will surely refuse to go along with it?


See that Kenneth Roy seems to be continuing with this theme too:

I remember when Bill Clinton came to Birmingham for the G8 in 1998. He stayed at the Swallow Hotel, by the way. He had a pint in the Malt House by the canal near Brindley Place (recommended if you're ever in B'ham). Anyway, after he finished his glass was smashed into small fragments by a secret service minder. Was he worried about POTUS's fingerprints or dna falling into the wrong hands?

Thank you for highlighting this, SR.

I have had numerous arguments concerning this practice; people either ‘get it’ or don’t.

It would be amusing to me to see the usual suspects – left leaning, pro EU, authoritarian councils being hoist on their own petards.

I have always had a hatred for those who wish to impose themselves on the privacy and integrity of the young – especially those outside the family and in positions of power.

Sheila, I've reloaded it. It works for me here now. Sorry about that.

Did you read Kenneth Roy today?

Ooops you did Sheila. That's what I get for going off, in the middle of reading your comment, to edit the link. :)

Jings Brian, how intriguing. Certainly something I've never heard of before. Food for thought.

Finger printing children is obscene BJ, yet so many parents don't seem to think out of the box about it. Scarey really.

"Fingerprints, which are most widely used, can be lifted .......have touched, or from many other surfaces"

But fingerprints are both a biometric AND a token. So a fingerprint authorised credit card would be quite an opportunity - steal their card and cut off their finger to use with it.

Too much information Woodsy. :) Accurate though.

"I can just see the police on fishing expeditions accepting a refusal by a school authority to allow tham to run their samples through it."

I expect they'd put up about as much resistance as TfL did when the police wanted to use Oyster data to track movement of suspects though the Tube network.

In other words, none.

"Was he worried about POTUS's fingerprints or dna falling into the wrong hands?"

Bit of a waste of time, given how widely that particular president scattered his DNA...

Just thinking about data collection, while citizens will persist in putting their full private history on the likes of Facebook,and with no security whatsoever, the government does not need a data collection system, its being done for them.

I resent and resist all attempts to get unneeded information from me.
Theatre ticket sir? Post-code and house number please.
Do you have a loyalty card? Nope. Do you want one? Nope.

BUT increasingly I think resistance is futile. And our best defence may be to undermine the system by holding data about everyone ourselves.

Nowadays details about everyone's tax/health/earnings can be stored on a key-fob costing a few quid.
Let's all buy one of these and walk around with them.

Post-code and house number, sir?
I can't remember, but your post-code is ..., your telephone number is ..., you've just come through a messy divorce, and BTW are you free tonight?

Our secondary school uses a card for library access, and meal payment can be made online or cash/cheque, the latter will be phased out by our bank later this year according to the bank. She takes a packed lunch.

However, her previous school had a fingerprint log in for either the library or meals, I cannot remember which, but do remember being more than a little put out when I found this out, for at no time had the school approached us the parents for our permission on this.

It is well known that to replace a number plate on a vehicle one needs to show the V5C, but even ordering parts, the registration is reuired which then immediately tells the seller not just the year, make and model, but the address of the current keeper.

When does a database society reach beyond the practical/useful, and into the invasive? ANPR to collect bridge tolls and everything else about your vehicle and YOU is available, including where your vehicle - and if you carry a mobile phone - YOU have been. This gets to the point that WITHOUT such tracking, you may be hauled in to answer for your movements - as they are untracked!

Yes Derek I agree - Just because we can doesn't mean we should. Yes we can process all the data we want and yes it's getting cheaper to do so therefore the busy bodies want more and more volumes of it. Time to say no to unneccesary data collection. Starting with this Girfec and all the other spying programmes, including bus passes, that go on. See the Scottish Review for more

Oh Julia, sharp as a tack as always. :) Why didn't I think of that?

Now you have a good point there Apogee. It may be worth a stand-alone post.

I think the next step for me is to spend some time contacting various agencies and asking for a record of what information they have about me. Must keep folk busy. :)

I just find fingerprinting children a few steps too far Derek. School admin worked fine without this and with the same or even less admin staff. It's not necessary, but as someone remarked, it's also brainwashing children to accept this as the norm throughout their lives.

When I'm out my mobile is off. I only use it if necessary. But of course younger generations 'need' it because it's a much more integral part of their lifestyle. In many ways I approve, not least because children have, nowadays, few excuses not to keep in touch with aging parents. I would say that wouldn't I? :)

Dram, Kenneth Roy is doing a great job about this. Encouraging to see someone of importance in the Scottish media asking the questions.

I'm posting all the recent coverage of these issues on this thread:

Handy to be able to send people one link :)

Just waiting for the permanent links for the latest Kenneth Roy articles to become available.

Grand idea Sheila. You're more than welcome to post here as you know.

DNA yields structural changes in water, which continue at very high watering down, and which lead to resonant electromagnetic signals that we can measure
DNA Testing

Thanks for the link Shahbaz.