Arctic ocean warms up. A sense of déjà vu. 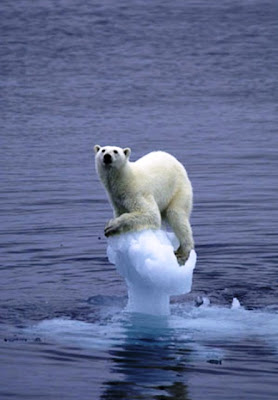 Although the first part below has been reported elsewhere on the Blogosphere, it may be new to some readers, so I recommend that at least the first link be followed.

"The Arctic ocean is warming up, icebergs are growing scarcer and in some places the seals are finding the water too hot, according to a report to the Commerce Department yesterday from Consul Ifft, at Bergen, Norway.

Reports from fishermen, seal hunters and explorers, he declared, all point to a radical change in climate conditions and hitherto unheard-of temperatures in the Arctic zone. Exploration expeditions report that scarcely any ice has been met with as far north as 81 degrees 29 minutes. Soundings to a depth of 3,100 meters showed the gulf stream still very warm.


Great masses of ice have been replaced by moraines of earth and stones, the report continued, while at many points well known glaciers have entirely disappeared. Very few seals and no white fish are found in the eastern Arctic, while vast shoals of herring and smelts, which have never before ventured so far north, are being encountered in the old seal fishing grounds."


This report is from that venerable publication, the Washington Times.


But it's not all bad news. "Cairn Energy, a corporation based in Scotland, recently began drilling oil wells in waters off Greenland's coast." complains Greenpeace spokesman and senior climate campaigner Ben Ayliffe in a comment published in Al Jazeera . Referring to the recent impact of Global Warming, he continues "It's a terrible irony that melting ice caps are (now) allowing companies and even governments to open up the possibilities of new oil developments"


I wonder if he realises just how ironic?

Meanwhile, back in the real world, the ARGO network of free-floating buoys shows that the oceans have been cooling for the last seven years or so.

But those are just facts, of course, not supported by computer models or "peer-reviewed" speculation produced by other barons who would understand.

Seem to recall a report a few weeks ago that seemed to be saying that the Arctic was floating over a 'bowl' in the seabed that had a couple of active volcano's at its centre,surely that would account for some of the warming?

It's all our doing, you see.

1922! Hah, had me there, naughty girl. In 2011 if a bovine passes wind somewhere climate change happens. Well, it does within about 2 inches of the initial gas release, lasting all of one milli second.

An interesting report in the Washington Times there that the warmup was noticed back in 1918, almost 100 years ago.
Seems to be nothing new under the sun.
Thanks Joe, for flagging up that report.
Not many SUV's in those days, although there were a few horses !

When are the Warmists going to give up with their fairytale stories of doom?

A large mass of ice mass ruptures the Oder Dam.

Washington D.C.'s biggest snowfall, causes the city's greatest loss of life when the roof of the Knickerbocker Theater collapses.

A temperature of 136.4 degrees F, in the shade, is recorded in El Aziziyah, Libya.


A temperature of -54°F, is recorded in Danbury, Wisconsin.

A geological survey says US oil supply will be depleted in 20 years.

… indeed it is déjà vu, all over again

I prefer the picture of three submarines surfaced at the North Pole in May 1987, its a pity that it, and some other similar photographs of the three submarines surfaced in a large lagoon don't get as much publicity as the stupid polar bear!
You can see these photos and the earlier one of USS Skate at the North Pole in 1958 at Watts Up With That which all show that the ice thickness has varied considerably over the years.
Of course, if these photos had been taken this winter, they would have been instant proof of global warming!

If you refer to my last year's guest post No IV "A Thumb (or Two) in the Scales", you will see how they can come up with this result by

(a) drastically reducing the number of thermometers in high Arctic areas where most warming is claimed.

(b) concentrating the remaining ones in the warmer locations.

(c) "homogenising" the record from these to produce estimated temperature readings for Arctic areas where there is no recorded thermometer for hundreds of miles. These are the areas where the greatest warming is claimed. The temperature has "risen" as the number of thermometers has come down by over 60% world wide.

And one I didn't mention then because they had not yet done it - but it was certain they would..

(d) screaming blue murder ( and being apparently believed in official circles)
that this is the warmest year ever. It is...it is....IT IS!!

but you have to be like those who could discern the cut of the Emperor's new clothes to discern it.

Like 'All Seeing Eye' said, I doubt if the 500 Russian sailors trapped in the ice would agree that the ice is retreating.
The floods in Queensland highlight the folly of believing the global warming scammers.
Building houses on Brisbane's swamps and floodplains because there 'would never be a repeat of the floods of '74 because of global warming ' was asking for trouble.
At least they've shut down their de salination plant ...

That will reduce consumer water bills and redirect money to building dams for the future.

I wonder what the Australian 'citizen of the year' Tim Flannery is now saying about 'global warming' after this reckless scare story...

Mind you , we have nothing to crow about in Scotland with the SNP increasing spending on useless windmills and floating white elephant wave generators as electricity and gas bills double every five years and our infrastructure crumbles under the weight of snow and ice.

As he's part of the working population he'll be responding to you all early evening.

I'm bored with all this ballyhoo on climate change, will it wont it - what to do - windmills, wave generators, nuclear - conventional - it is a manufactured crises with no guarantee any of their proposal will work other than as an excuse for a lot of carpetbaggers to claim they're doing something and to increase our taxes to meet the costs of it.

The rational this is based on is as whimsical as the arguments supporting the charade of the money markets and its overpaid shamans.

Do you really think India, Indonesia, China, Brazil, Mexico and South America in general are going to ignore their vast reserves of fossil fuels?

I suspect 'Global Warming' scientists don't get (taxpayer-funded) research grants for projects that might prove the opposite.

It seems it's not Anthropogenic; it's not Global; and, it's not Warming.

Rosie's readership is intrigued about the relationship!

It's not only cattle-farts. The gaseous emissions from GW 'scientists', politicians, and gravy-train riders have a similar effect.

And the article reports interest in developing the natural resources (back then, coal) revealed by the melting. [c.f. Cairn Energy's current interest in oil.]

Not only in Russia's Far East Sea of Okhotsk as you've linked.

And, off Newfoundland in 2007. http://en.wikinews.org/wiki/Sealing_ships_trapped_in_ice_off_coast_of_Newfoundland


An occurrence is one year is blamed on 'the weather'. Recurrences must be 'climate'. And consistent climate, at that.

Ah, but since then, it got warmer.

As you state, those were summer surfacings.

It was from 30 July that Skate steamed to the Arctic where she operated under the ice for 10 days.

GW 'scientific research' seems to be knowing where best to site your measuring equipment to deliver the (pre-determined) results required for Research Grant Renewal.

I suspect the Aussie market will soon be flooded (pun intended) with sake & jeans.

"Do you really think India, Indonesia, China, Brazil, Mexico and South America in general are going to ignore their vast reserves of fossil fuels?"

And they're not going to reduce their CO2-generating use of those fuels either. They'll let 'the developed' world make itself even less competitive by legislating for uneconomic production costs & reap the benefit.

I wonder if the residents of Brisbane with their flooded £2m riverside apartments will now realise that they were lied to by the global warming scammmers about no more floods and years of drought ahead.
I hope so but I doubt it. Building on swamps and floodplains in Queensland will probably carry on regardless.

Volcano's heat the water melt the ice, cause global warming ;-), And the floods in Queensland are now being admitted (slowly) as the latest in a repeating sequence of "weather", why else are so many houses built on stilts, people have "been there" before.
The real question to my mind is who started this AGW scam and when? Might explain a lot !

"Building on swamps and floodplains in Queensland will probably carry on regardless."

But I think potential buyers will be slightly wiser. For a brief period.

"The real question to my mind is who started this AGW scam and when?"

Climate Research 'scientists' who realised there was a massive pot of funding available from gullible politicians.

I suspect it's a truism that 'AGW' actually 'began' soon after the first grants were made.