I Dreamed A Dream, the CD by Susan Boyle 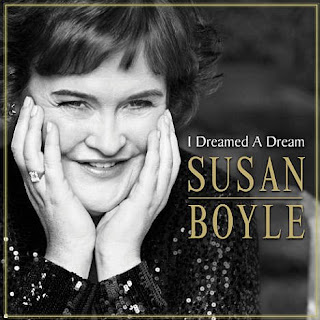 This weekend I was given a present of Susan Boyle's first CD 'I Dreamed A Dream'. It was my intention to order it for myself but I've hinted here, there and everywhere it's what I'd like for Christmas, so I was truly delighted to receive it now.
Accompanied by a glass of smooth red I retired to a quiet retreat, set up the hi-fi and pressed play. Her first three songs have been well publicised - Wild Horses, I Dreamed A Dream and Cry Me A River - all beautifully sung and her contralto more defined than it is in her live performances.
But (there's always a but isn't there?), by the time I reached track 6 'Daydream Believer' I was speedily losing interest. It was nothing to do with the quality of her voice or the pitch whatsoever, but the tempo. The musical director must have set a metronome at larghetto (60-66 beats a minute for those tempo aficionados) and to listen to Daydream Believer at that tempo turns it into a dirge. Track 9 'Who I Was Born To Be' was perhaps the one in which she was able to use more expression. I understand it was a song specially written for her to sing on this her first album.
Most of album is set at too slow a tempo and there is no variation whatsoever and thus it loses much of its impact. I didn't find it relaxing, quite the contrary - I wanted to shout 'just a wee bit faster please' too often.
Susan Boyle is a ballad singer and her voice has a range, quality and delivery not often heard these days in the younger generation. As any singer knows ballads require good breathing skills to flow seamlessly and she doesn't fail to produce the goods.
The blame must lie with the producers of the CD because they are the people who have the last word unless you're a well established singer. They should have introduced greater changes of rhythm - a couple of the songs were crying out for it.
It was my intention to buy the CD for a couple of friends as Christmas gifts but I've decided against it now. I think Susan Boyle's in this for the long haul, so I look forward to further releases in which she is able to have some say in the production and musical arrangements. Then I'm sure I'll hear something really special.
Tweet
Posted by subrosa at 10:45

She's a good singer but somebody needs to tell her to put some make-up on!!!

Bit early for a Christmas present S/R, there are still 26 days to go.

Sorry to hear that it was not what you had hoped for, but I guess it will just take her a bit of time to find her feet. Maybe she has allowed her MD to call most of the shots in the arrangements, but practice makes perfect and I am sure that an more harmonious marriage will come.

Killer, she tries I'm sure. It's difficult for her to adjust to wearing makeup every day of the year. Yer awfy hard on her!

It is Munguin, but can't you tell someone was trying to get in my good books? ;)

I'm sure she had little say in the content or the arrangements and as I say, when she's more established, she'll be able to call the tune (no pun intended) about these matters.

What surprises me is that the CD was produced by Simon Cowell's company. I would have thought someone would have remarked that it is a CD of ballads. Even a non-fan suggested maybe the hi-fi had a problem.

As I say I look forward to her future work when she can pick and chose her producers and arrangements.

Mrs OR picked it up. It appeals to my manic depressive side! Love it!

Pleased to hear it OR. I prefer my depression music to be slightly faster in some songs, that's the difference!

Great stuff. Me too!