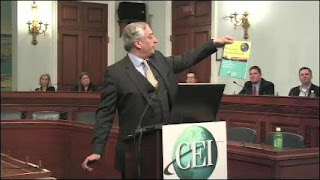 Lord Christopher Monckton has spoken about the Climate Change scam, on the American Alex Jones Show.
I cannot upload the video (perhaps because it's too big), but you can see it here. From someone who has questioned the climate change policy for many years, he makes many valuable points. One with which I thoroughly agree is the UN ought to be dissolved as it exists only to enrich itself at the expense of the nations it purports to serve.
Tweet
Posted by subrosa at 20:52

I would be really green if it was easy

Part of it is nonsense. I mean, how many people are prepared to turn their kitchens into mini recycling units? Common sense is what's needed. Have you worked out the cost of even collecting rubbish? All the new council lorries, new bins, difference sized bins, on and on it goes...

Hi SR
Well, the video is very thought provoking.This is a coup de tat by stealth. How long before the apparatchicks say, we don't have elections at the top any more, what's the point of having them at the bottom. and looking at the voting figures, we are already halfway there.
AGW is an excuse for making us poorer, much poorer, reduce our ability to travel around the world, and then locally,by making it too expensive to travel far, then locally,eventually travel by government provided transport only, and only if you have the necessary piece of paper,and without that you don't go any where.
Modern communications, internet,radio, telephone will all be gradually more expensive, and also less efficient to use, and finally will be no longer available.
Why? because those that remain will be too busy growing food to stay alive to worry about such things, and, oh yes, they won't have the education to understand the use of them any way. That will be the preserve of their masters who they will serve. Population will be reduced to a quarter by new diseases which for some reason,can't be controlled by the few poorly trained health workers available,although the rulers will seem to be untouched,being elites.Life expectancy will be slashed to 45 to 50 years.
Welcome to the 10th CENTURY. Time travel, but backwards.
Thats what AGW SCAM and COPENHAGEN means.
EVERYONE gets POORER, and in some countries to get poorer means DEAD.
Watch the video,listen to the man and THINK, long and hard, understand what your government has got you into and intends to get you further into. Probably without understanding what is happening because their civil servants didn't understand it fully either. But ignorance is no excuse.If you don't like what is happening, email your MP and let them know how you feel.
Remember, the MSM for their own reasons are supporting the scams, in this they are not your friend.
Think about this carefully!

Subrosa, by the way if you want to or feel you need to remove my last comment, I do understand because I agree with your comment you posted to me.

Thanks for the link SR, I listened to it all last night, very worthwhile. No wonder Al Gore is scared to face up to Lord Monkton in person.
The last bit where he warned America not to be complacent about their democracy, pointing out how we in Europe are well down the path of losing ours.

Shocked and stunned to wake up this morning and read the news about Montague Burton in the SOS. So soon on the heels of the Wardog thing. There is defo a campaign going on here. You are too much of a lady to get caught out with bad language etc but watch out anyway. Nationalists are on the radar.

Lord Monkton, like most climate change critics, is not a scientist. He has a degree in classics and a diploma in journalism, and no other qualifications. He arranged funding for a lawsuit against the British government for distributing the film 'An Inconvenient Truth' in public schools. He himself is funding the distribution in schools of the film 'The Great Global Warming Swindle' which has been roundly discredited for scientific inaccuracy and misrepresentation.

Monkton is member of an organisation called the Science and Public Policy Institute. Looking at the other members we find:

William Kinninmonth: his latest book launch was organised by the Lavoisier Group, an organisation grown from the Australian mining industry and of whom it has been said that they are "devoted to the proposition that basic principles of physics...cease to apply when they come into conflict with the interests of the Australian coal industry."

Bob Carter: a marine biologist, a member of the right-wing think tank The Institute of Public Affairs and a founding member of a front group (The Australian Environment Foundation) which it set up. His attitude to research is novel: he said the role of peer review in scientific literature was overstressed, and whether or not a scientist had been funded by the fossil fuel industry was irrelevant to the validity of research, adding 'I don't think it is the point whether or not you are paid by the coal or petroleum industry'. So you can guess who pays him.

Craig Idso: Chairman of the Board, founder and former President of the Center for the Study of Carbon Dioxide and Global Change, an Arizona-based global warming skeptics group that has been funded in part by ExxonMobil.

David Legates: a common contributor to publications released by the National Center for Policy Analysis, a conservative think-tank that strongly opposes climate change regulation. They are funded by - you got it in one - ExxonMobil.

Joe d'Aleo: seems to be pukka - the only member with relevant scientific background and no known connection to a corpororate boardroom.

James J o'Brien: a climate scientist, but a member of the right wing Marshall and Fraser Institutes and funded by - oh you know who.

Morning Jeanne. I've done that if you don't mind.

It is indeed Apogee and Monckton knows his stuff too.

AWG is the final nail in the social engineering project then we'll all be controlled like robots. I'm beginning to realise what life was like in the USSR.

Very far down the path banned and yet there is little protest except in blogs. The MSM is mainly silent.

Morning Observer. There's something rather unsavoury going on but I'm not going to get involved in the gossip.

Thanks for the compliment, you're very kind.

Morning Vronsky. Thanks for taking the trouble to post these details.

Does that mean these people aren't credible?

They're no less credible that government paid scientists.

These days an independent anything is hard to find. The problem has arisen because the pro-warming lobby refused to allow their data to be examined by the anti-lobby whilst the anti-lobby were happy to allow anyone access to theirs.

If the pro-lobby hadn't behaved in this manner then I doubt there would be so many interested parties involved nowadays.

It always pays to be up front usually. I'm still a sceptic and very doubtful that global warming is completely man-made.

An independent anything is hard to find.
Great quote Subrosa - simply because it`s hard cash that does the talking.
Next time you listen to someone in a position of authority ask yourself who`s paying them.
Talk is no longer cheap!

Afternoon Vronsky.
Spent last night checking out Al Gore on google and then you tube. Seems the senate doesn't think much of his connections to big business, Enron for one, remember them? and he is set to make a billion or more from "cap and trade" and some other nice little earners. The Prophet always has to make a profit.
And the same Al Gore for years has refused to discuss AGW, with the excuse that the science is "settled", seems after the last week that"fiddled" is the correct word!
And "an Inconvenient Truth" became "a very inconvenient Truth" when real scientists took it apart and proved it was rubbish. Seems that Mr Gore studied the subject in high school but not much further,of course he could have learnt at home like any other citizen .Lord Monkton seems to have applied common sense to this, and gives an appearance of honesty, on the other hand, Mr Gore in front of the senate appeared evasive and shifty!
But go and have a look yourself, I'm not interested in the acolytes, its the high priest you have to consider!
Oh, and its all about money, I dont care if scientists are taking corporate dollars, thats between them and the shareholders, the ones that bother me are the ones taking taxpayers money under false pretences working a series of scams which any serious investigation should have uncovered, except that the government fell for the religion of AGW because they could see a big tax take and they were not asking questions.

Well said Ronnie. Talk is expensive these days and freedom of speech doesn't really exist in the context it did 30 years ago.

Who can actually have a look at some of these rather shifty characters in action on Aussie TV. It's worth going right through the 8-part YouTube series - especially at the end, when we get to hear from the studio audience. Those really loopy ones are the people you are aligning yourself with.

Vronsky, I promise I shall watch the videos.

What about the loopy ones you are aligning yourself with? The types who celebrate the death of one of their opponents for example?

Aye there are nutters on both sides of the debate I think. Thankfully I can still pick and choose who I sit next to, but I wouldn't be surprised if the EU bring in a directive banning choice.

Al Gore profits not only by being the CEO of the worlds largest Carbon Offset brokerage ( where are all the offset forests Al ? ) but also by being a major investor in the company that is making "smart meters" to be fitted in all our homes to be nosy about our energy consumption.
If he could make money out of HIPS I expect he would be in on that scam too.

Thanks for the link banned. Interesting site too isn't it.

Al Gore = Galore. Did you know? Of course you did. Dollars Galore that's him.