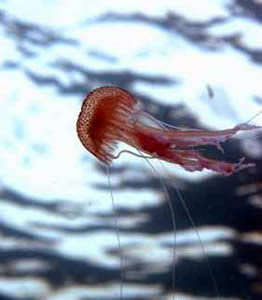 Scotland's islands and coasts are under threat from an alien invasion of millions of exotic jellyfish.
Not only are they exotic but they're killers. The mauve stinger jellyfish (or pelagia noctiluca) has been seen numerous times in the waters of the west and north in recent weeks. They're usually found in warmer areas such as the Mediterranean or Red Sea but the milder autumn this year may have encouraged them to have a swim further north.
The latest cluster or 'bloom' of the creatures was spotted off Orkney last week. Each jelly fish, which feeds on plankton, is only around 4 inches across but together they wreak havoc on fish farms and beaches and cause millions of pounds of damage.
In 2007 a bloom billions strong devastated west coast salmon farms. Worst affected was a farm in Northern Ireland where more than 100,000 fish were killed at a cost of more than £1 million.
At its worst, the solid mass covered 10 square miles of a depth of 35 feet. Jellyfish numbers are increasing all over the world. Over-fishing may mean there are fewer predators to keep numbers down.
Source
Tweet
Posted by subrosa at 15:09

I did some extensive low level survey flying back in the early nineties in these waters and saw one of these phenomena. Quite an amazing sight. I believe that a gulfstream surge is partly to blame where the warm waters are funnelled by very low pressure movements and high winds.
Nothing to do with temperature, of course!!

PS
Couldn't we lob a considerable number of lying politicians in amongst the shoal to soak up the poison? Or has that already been done and the buggers survived.

Is the picture in anyway related to Mandleson?

Hey OR, that's interesting. Did you reading the source? It only mentions 2007 and then tries to pin it on climate change among other things.

PS Doubt it OR. These jellyfish only tend to go for quality by the sound of it. :)

PPS I wouldn't know. Perhaps you see a resemblance though.

Overfishing is a considerably more believable cause for this. in my humble opinion.

I have just about had enough of the climate change lunatics proclaiming we are all as good as dead.

They'll blame climate change, but overfishing is the far more likely cause.

You may have noticed I left our the reference to climate change (in the article) to spare our blood pressures Sandy.

See my reply to andy QM. Yes of course over-fishing is far more likely, the EU were warned about that years ago.

Swimming in Scottish waters? They must make them tough in Dundee. I once, during a rare heat wave, stepped into the briney at Pettycur bay. Whin seconds I had lost all feeling from the knees down. A smart U turn ensued followed by a swift rubdown and a mental promise to stay out of the water around here forever......(still active)

They have all been chased from the Thames http://news.bbc.co.uk/1/hi/programmes/politics_show/regions/london/8383589.stm into our waters.

I remember once paddling somewhere in the East Neuk Dram. It was freezing and suddenly my mother realised the water was full of sewerage.

Don't think I tried it again until around 20 years ago at St Andrews. Summer day. Like you legs dumb within 10 seconds.

They have people jump in the Tay every New Year's Day you know. Tris may know more about them.

Highlander, I can't get the link to link.

It works for me!

Sorry Subrosa, the comment was not aimed at you.

The media and the scientific herd as well as gullible politicians who promote this stuff were the target of my comments.

I should have been clearer.

Sandy I knew it wasn't aimed at me. The reason I mentioned our blood pressures is because every time I read the hype mine goes up, I don't know about yours.

Kind of you to be concerned though. We've just got to keep the pressure up about the rubbish they spout.

I don't think I've read a paper which in the past week in which the words climate change haven't been on the front page in bold letters. What's happening banned?