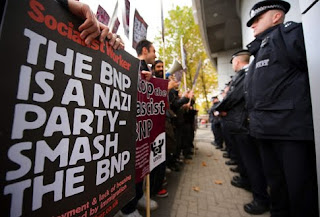 Yesterday I was invited to be a guest at a bridge club I've never attended before. It is a ladies club and as many of you will surmise, the age group isn't youthful. Many at these clubs are highly educated women who have had much experience of the world and life.
During the beverage and melt-in-the-mouth shortbread break, I heard one conversation turn to last Thursday's Question Time.
Tuning in to the conversation I heard one group of seven women talking avidly about how they considered Nick Griffin had come out best and I realised they were talking about Question Time last Thursday.
Not one to miss an opportunity (unless I'm feeling shy), I asked the chairwoman if she would mind if I asked a question to the room and when I explained my reasons, she was kind enough to say yes.
I asked the room "Did the programme expose the weaknesses of the BNP arguments and policies?"
In a room of 23 (plus me) of mature women not one said yes. The major comment was about the behaviour of the other panelists who seemed hell bent on doing their (pathetic) best to decry the man. I know where I live many people vote Tory but also many vote SNP more and more and I have Pete Wishart to represent me in Westminster.
In fact, at the end of the afternoon, so many women I would never have thought had so much interest in politics, said Nick Griffin, aside from Dimbleby, was the only person on the panel not to be abusive.
I know, a small ladies bridge club (and believe me not all vote tory!), to be so verbose about a political TV programme may sound unusual, but I wonder how many small groups around the UK think the same.
None supported the extreme policies of Nick Griffin's BNP but they did have major concerns about how the 'main stream' parties are dealing with various issues which are well documented elsewhere, although my link is just one example.
That was my afternoon, I do hope yours was enjoyable. In case you're interested I was playing with a Scottish Master and I didn't play (bid for those of you who play bridge) too well. I know my partner and she was, like most good bridge players, diplomatic in saying she'd also made mistakes.
Oh how I wish more of society was so tactful, but we seem to have lost the ability to acknowledge others play so much of a part of our lives, often without our awareness.
Tweet
Posted by subrosa at 18:25

Interesting - this doesn't shock me - I siad the other day that the panel seemed to be chosen to make an Independent reader think that the BNP had come off worst. A ladies' bridge club in blue Scotland wasn't the demographic I had in mind, but the point stands...

as one bridge player to another....I forgive you attending a ladies only!

The hyprocasy of the MSM on the BNP question leaves me really annoyed. You can't ban them - they are a legal political party, same as the SNP, Ukip, Cons, Lab & Libs. Debate with them! To try and 'smear' them reduces the three main parties to the same political gutter!

One could almost 'give up'!

Personally I think the whole Griffin thing is a storm in a tea-cup and the press will soon move onto some other subject.

Bridge is like another activities involving a partner (which I don't indulge in, being a wee free).

It is absolutely amazing that the BBC managed to make a mess of this. For all the massively highly paid executives that they have and enormous amount that their "star" interviewers cost us (well you, as I don't have a tv), there still wasn't one of them that could make a fist of it.

Even wee Border tv could have done much better.

Oh, and as for bridge... as I've told you before I'm miles too stupid to begin to understand how to play it.... but I'm amazed that political correctness in Labour Britian allows a ladies only club, good thing though that is!

This stunt was the biggest mistake that the BBC and their Labour masters have made in some time, SR.

The Left have never been very good at judging public reaction and this latest gaffe is a real stinker!

People now feel sorry for Nick Griffin.
A week ago you could not have believed this would ever be so.

I watched the program and if the intention was to make Nick Griffin look like a monster, then it surely backfired on them.

Just trawling thru the many blogs over the last couple of hours, I am starting to get a feeling that the BNP has a lot more support than the public realise as a group.
Seems they do not as a group realise this because the MSM and the BBC are feeding confusing disinformation to the public, probably because of political leanings.
It is starting to feel like people are so totally sick to death of the incumbent shower of incompetent, thieving, conniving,lying b******s who claim they are running the country, from the PM to the lowest councillor, that ANYTHING looks a better bet than the current.
Stopping the BNP from speaking is a particularly stupid thing to do if you think the BNP are so wrong.
Let them speak and let people decide for themselves. Or are the LIBLABCON afraid that people might like what the BNP say?
Could it be that people have been totally ignored, and yet at the same time ripped off by their elected "representatives", that all the individuals are saying,spontaneously, "enough is enough".
If the BNP from almost nowhere can
get the number of votes to elect 2 MEP's, the next G E could be "interesting" indeed! Although some people commenting on blogs seem to think it will be aborted in some way?!!
Old Chinese curse.......May you live in interesting times !!

It surprised me it was a point of conversation IPP. Usually it's just small talk on these occasions.

It's not often I do attend ladies only WfW, they can be quite tense occasions as I'm sure you're aware.

Brownlie, glowering is NOT permitted, it could be code for something.

I remember years ago at one tournament, a chap kept insisting one of his opposition was sending messages to his partner because of the way he adjusted his specs.

Aye, cards can cause serious emotions to surface.

It is indeed BS, and both parties thought they would outsmart the BNP.

True John, who would have believed it. He's a despicable man and he did nothing to endear himself to the public on Thursday, but he cleverly never abused anyone either.

I do think that was the intention Del and to push ratings up of course.

Hi Apogee, of course if the other parties had dealt with the immigration numbers years ago, we wouldn't have the BNP on the rise.

Interesting times indeed. I wonder if they'll hold their supporters.

Aye tris, in this pc world it is a wonder. Maybe it's because we're tucked away in the sticks. Anything north of Edinburgh is usually ignored as we know.

Apogee, an interesting point about your blog trawling. I agree with your comments about the implications of stifling debate but am unsure about your starting point of the BNP "having more support than the public realise".

Sometimes our blog-surfing-of-choice can be like an echochamber unless we make a conscious effort to dig further. My browsing for insight on this story found me across sites to varying extents sympathetic and unsympathetic to Nick Griffin yet all united around a belief that freedom of speech was a fundamental part of our democracy. And I agree - the man has a mandate from the voters and as such has a right to have himself heard in subrosa's bridge club.

But this is a long way from those blogs you have read supporting those views themselves. Are you sure you're not mis-reading the support for his appearance as support for his views?

This subject hopefully next week will be forgotten. However the BBC messed up not by having him on but in the way the programme was directed. Griffin got the sympathy vote because as I said on my blog, no-one likes a bully. The BBc should apologise and leave it at that.

I do hope it dies a quick death DL, but it certainly caused a stir. It's not often card playing women discuss anything other than cards at a tea break.

A warehouse worker that I spoke with on Friday had never heard of Nick Griffin or QT, neither had my neighbour who works on a Tesco till.

They don't read the Sun or the Daily Record then banned. :)

Hi SR
I quite agree with that,if the shower in power had fixed the problems that they were supposed to do,we would'nt have an immigration problem, or for that matter,a financial one, or a lot of others.
People will support the BNP precisely because the main parties and the MSM are making so much noise the BNP policies are not heard,except they are anti immigration; a lot of white, middle class and working class England will vote for that.

Hi there, All Seeing Eye.
The point I was trying to make, and obviously did'nt, was that people know what they dont want in the way of policies, i.e. Government/labour; and the reported BNP policies on immigration, which a lot of people do.
There seems to be real hatred of the government out there, and people are supporting the BNP as less bad rather than better than.
The conservatives in this context are seen as same as the government and in this particular battle, largely irrelevent.
Whether BNP support holds up could depend on the Conservative policies,when they happen, but the BNP did get 2 MEP's !!!

I've not got the vibes of middle England these days apogee so I've no idea what type of person would vote BNP, except the obvious of course.

Having taken 2 small people around the Dr Who exibition, my Saturday afternoon was good, at least until i heard about the events at New St Mirren Park.

I can't really say that Im surprised at the reaction. To abandon the format of Question Time and (maybe unofficially) turn it into a Question Time BNP special backfired. Partialy down to the fact that everyone seemed intent to attack Griffin (some space for Griffin to let himself hang himself with his own retoric would have been a better tactic, Griffin must have been pleased to hear his words drowned out by inverted snobs behaving like BNP members), but the major reason was the poor panel.

I have never rated Straw as a good debater, the Tory seemed to dissapear completely and Huhne was jusy anonymous. Bonnie Grier was a bit more dignafied but boobed towards the end. The BBC were correct to invite Griffin on to Question Time. I just wish the panelists were of a better caliber.

Allan some of these women at the bridge would have done a much better job in exposing him for what he is.

As you say, he never really had say more than a few words before he was shouted down. If only he'd been left alone to speak.

What surprised me most of all is that he came over as a spoilt adolescent who was playing politics and didn't believe anything he was saying.