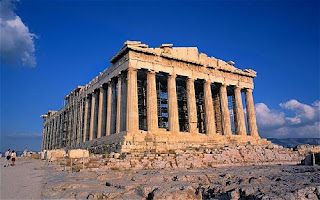 This could well be a crucial week for Greece.  You’ve probably read that sentence somewhere every week since the banking crisis of 2008.

I’ve never been to Greece. In the early 70s I organised a holiday there but it was cancelled for reasons beyond my control.  I’ve never had a desire to try again.

How often have we heard about Greece’s financial problems in the last few years?  It’s becoming boring and I’ve more or less given up reading about the country’s woes as the same protracted negotiations with the EU rumble on.

It appears the Greeks want to stay in Europe.  Little wonder really because if they returned to the drachma they would have to make all purchases in cash.

Without a release of cash before 30 June, Greece would become the only developed country in history to default on the International Monetary Fund.

A family friend has just returned from a week’s holiday in Greece.  They were on the mainland but became acquainted with an Athenian couple who own two hotels in the Aegean Islands.  During the week the political problems of Greece were discussed and the Athenians were angry at their government’s proposal to increase the VAT on the islands. Profits would be greatly reduced and their intention was to sell their businesses if possible. That didn’t seem to concern them as they seldom kept an island business for more than a few years and when asked why, the answer was ‘It’s good to keep moving around’.  The horror of having to pay tax was too much for them to bear it seems.

What could possibly go wrong with the latest proposals for VAT on island businesses?  One of the major problems is that the Greeks do not pay tax so the cunning plan to ask them to pay massive new taxes is a non-starter.

Greece has never had a large enough GDP to service the interest on it’s €320bn debt, let alone any of the capital yet the ECB has continue to loan them billions.

I’ve no doubt by 30 June a suitable arrangement will be made with the ECB financiers and the people will once again be lulled into a false sense of security - until the next time their government can’t meet their creditors demands.

It won’t be too long.

Isn't it amazing the lengths the 'colleagues' will go to to keep the Euro-zone together?

Just think, an 'independent' Scotland could have been paying for this too, as a strong 'European' sitting at the end of the 'top table' counting its diminishing 'non-carbon' Euro oil earnings!

Never mind, soon there will be all these subsistence farmers eking out a living on the 'released' lands in the highlands, just like Greece. Not that there will be any Scots qualified or willing to take on the role. Just a few mad English ex-bankers and lots of new 'Scots' from Ethiopia well able to herd a goat or two. (But how to keep them up in the hills, won't they just take over the cities?).

Social engineering is a great game for the politicians; pity that for the people's sake they don't just play it on their tablets.

You're not wrong. We were in Paxos a couple of years ago and frequented a local taverna. There was never a written bill or receipt and we always paid cash.

One night, the owner started clipping bits of paper to the table. We asked him why. He said "Don't worry. The tax inspector is over from the mainland. We'll be back to normal tomorrow."

It really doesn't matter if the Greek government doubles the taxes they don't pay anyway if you think about it. Of course, they frigged the numbers to get into the Euro in the first place because if they told the truth, they wouldn't have qualified...

This whole calamity should be a warning to us all, and one we should bear in mind when we get, if we ever get, an ‘In/Out’ referendum.

Whilst what is happening in Greece may indeed be a tragedy where the not unexpected and catastrophic finale is yet to be played out – it is, however, merely a symptom of a Europe whose financial and monetary policies are in total and terminal disarray.

Whether Greece sinks or swims has almost become academic, for either way, it has proven how totally ineffective and indecisive the EU is as a creditable or coherent financial body.


In 1975, I like many others voted in the referendum to stay within the European Economic Community (the EEC; the Common Market), however over the intervening years that Common Market like some life threatening tumour has metastasised into the all pervasive and bureaucratic monster that is the European Union – and like most cancers it begins to kill off parts of the body which hosts it – Greece is just that first part – who will be next?

Absolutely JimS. The future is frightening.

That’s true Dioclese and I don’t see them changing. Eire is another country which prefers cash. No wonder both have had problems.

JRB the Greece business has been going on for a long time yet people seem to be sticking their heads in the sand. Many of those people are educated folk.

So many of my friends seem to think Greece is nothing to do with us - it’s ‘only a holiday destination’. The majority of these friends want to stay in the EU too.

Is there too much information around or too little? I suspect most of the information is subjective anyway and thus it’s difficult to gain information.