UK Society Is Less Integrated Than Ever 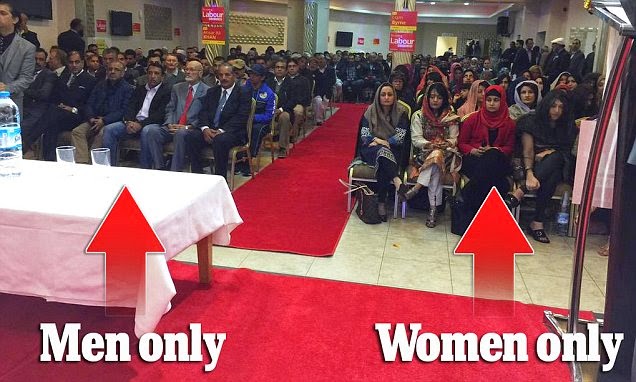 Image from the Daily Mail

Yesterday Ed Miliband, quite rightly, was ridiculed for his ‘Tablet of Stone’ circus.  Who is advising that man?  He doesn’t need to be portrayed in such a manner, he does a good enough job of looking rather stupid without props.

Now today we have politicians complaining about the segregation of men and women at a Labour party hustings in Birmingham.  Why the faux shock and horror?  Most people know that the Muslim community do not permit women to have the same freedoms as men and if there’s any criticism I’d make about the above image is that I’m surprised women were present at all.

Many years ago now a young Muslim student befriended me at the college in which I worked. We both lived quite a way out of town and someone had said I may be able to give her a lift home one evening as her brother was unable to do so. She explained in the car that she wouldn’t have been able to accept a lift from a man, although there was a male student who had offered.  This was the start of my education about Islam.

Her family weren’t keen on her being an acquaintance of mine but I think they saw my uses and tolerated it.  Never once was I invited into the home when I collected or dropped her off on the odd occasion no family member was able to provide transport.  She was 18 but her father openly told me she would never learn to drive. He had an older daughter who had learned to drive and now ‘she was beyond my control’.

I was invited to the student’s arranged marriage which took place in a local town hall. That was the only time I met the student’s ‘driving’ sister and we had a pleasant hour or so talking about what life in general.  That room was very much divided - similar to the above photograph - and we sat for 4 hours waiting for the final guests to appear. Their coach had broken down en route from Blackburn which was the groom’s home town.

Having arrived at 1.30pm for a 2pm wedding, I was beginning to feel rather hungry around 5pm but filled myself with water while giant bottles of coke were passed around other guests.  By this time I was aware I was the only white person present in a congregation of around 150.

The ceremony didn’t appear to take long once it started and by 6.30pm there was an announcement in a language I didn’t understand. ‘Food is ready’ said the prettily dressed woman to my left.  ‘Thank goodness’ I thought, at least I can move from this seat on which I’d been perched for well over 4 hours.  I stood in anticipation of having an interesting supper and felt a tug on my coat. ‘Men go first’ I was told. This was expanded with the information that the women had to wait until the men had eaten.

My reaction?  I hurriedly left and was home within 20 minutes, still reeling from the culture shock.

It was some months later I had a telephone call from the student who asked if I would provide a character reference for a job application. She had moved to Blackburn immediately after her marriage and found the constraints suffocating and wanted to apply for a job.  I sent the reference and didn’t hear more. It was the following year when my doorbell rang and there stood the student with a baby in her arms. She was visiting her parents for the first time since her marriage.  We chatted for quite a while but I was conscious she kept looking at her watch.

The job?  Her husband and his family refused to allow her to attend the interview and told her there was no need for her to work as she had enough to do looking after the older members of the family and having children.  She wasn’t allowed out without a male member of the family or one of the senior women accompanying her.

Whilst I have no problem with people’s religious beliefs, I’ve often though what a waste of a bright, attractive young woman. Last time I saw her she was deeply unhappy.

So the critics of the above image shouldn’t be surprised at such segregation. What they should be criticising is the fact that a special hustings for Muslims was held, when the same critics are the first to say we are an ‘inclusive society’.  Some sections of society will never integrate with the majority.

This hustings, a public meeting, should have been open to all regardless of colour or religion. That would have been more in keeping with my desire for an open and integrated UK.  Will it happen? I firmly believe the answer is never.

I found your experience interesting but not surprising.

You suspect that this 'minority' will never integrate with the 'majority' and you are probably right. What you don't say and maybe don't know is that where this picture was taken the 'minority' is the 'majority'.

This isn't a little 'Chinatown' or little Venice of ice cream sellers formed from small-scale immigration in the past. What we have in Birmingham and some of the northern English towns are detached provinces of Pakistan.

From cradle to the grave these people have no need to interface with the so-called 'host community'. Medical, education, legal or local government services can all be obtained within the 'province'.

Our social 'engineers' tell us to celebrate the 'diversity' - "It's only a 4% minority - don't worry", yet in some parts of England it is closer to 40%.

I'm sure that if 40% of Dundonians thought the lamp posts should be painted pink then 'democracy' would ensure that that would happen. Suppose that 40% of 'Brummies' (hah!) know they are following the one true faith and the rest of them aren't, how long before the rest are 'put right'?

I expect 4,000 miles away their are Sioux people waiting for the Yankees to 'integrate' too. At least they didn't connive in their own genocide and colonisation.

Like oil and water, politics and religion simply do not mix.

I recall a "mixed" marriage long ago when the Catholics and the Protestants sat on opposite sides of the room. But they did eat the same food.

JRB, Islam has managed it for 1400 years and shows no sign of stopping.

JimS, living where I do I have little experience of places like Birmingham as a residence nowadays so I respect your comments.

Ah but our churches have moved on thankfully Demetrius.