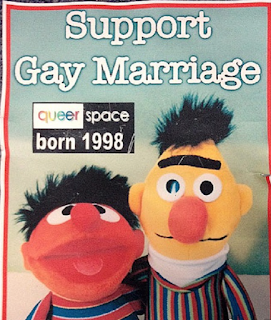 Many times I wonder at our justice system.  On Tuesday a bakery company, which cites a Christian religious ethic on their website, was convicted of discrimination because they decided not to bake a cake with a pro-gay marriage slogan.

Is nobody allowed to decide how they run their business without minorities protesting loudly?  The gay community, along with others, has the backing of government funded bodies, yet these days the voice of Christians is usually nullified by those who dictate justice in our courts.

I’m not believer in 'fairies in the sky’ but I do believe that spiritually something goes on in our world.  My morals were taught to me by a Christian family and church which, as an adult, I’ve seldom attended.  They make no effort to include me and because I’m not a member of the Church of Scotland thankfully I don’t receive these intimidating little envelopes asking for very regular donations.  These were part of the reason my grandmother moved to the Scottish Episcopalian Church back in the 50s because it didn’t intimidate her with any numbered envelopes.  Aye, they were numbered in those days so any contribution could be traced back to the contributor and a donation record kept. I’ve no idea if that was/is the practice of other churches in an effort to keep data about their members, but it’s not particularly pleasant.

I digress. What does the British justice system have against Christians or folk to hold Christian beliefs?

The Irish are more religious than many Scots these days.  Religion has - and still does - play a big part in their lives.  Gerry Adams shaking hands with Price Charles doesn’t make relationships better, just more acceptable to the public. “If he’s shaken hands with Price Charles then the past is past.”  No it’s not.  The past is history and no one ought to forget history. Politicians ignore history when it suits their specific ideals and we now see the results in various disguises.

This Ashers bakery case should never have come to court. It was the strength of the gay rights lobby and the Irish Equality Commission - all funded by taxpayers - which ensured it happened.

As the person who ordered the cake was a gay rights activist it could be assumed he targeted a business with a well known Christian ethic.  Who knows.

There seems to be double standards in the gay community.  A couple of years ago a Christian couple were fined for not allowing two men to share a double bed in their bed and breakfast, yet if you google ‘gay hotels’ you find pages of links to hotels which only cater for gay people.

Why do a small section of the gay community insist upon targeting Christian businesses which openly declare their Christianity?  Their behaviour doesn’t do the gay community any favours whatsoever and I know it is an embarrassment to many.

One has to ponder why the gay community & the Equality and Human Rights Commission fail to question the lack of employment opportunities for the former, within the approx 2,000 madrasas in the UK.

Perhaps the latter could be sued for their inaction?

I suspect that Ashers didn't question the sexuality of their would-be customer, (why would they ask?). The problem was the message on the cake.

As so-called same-sex 'marriage' isn't legal in Northern Ireland the message could be construed as promoting an illegal act or at least promoting a political message.

Would the commission have taken out a prosecution against a unionist baker refusing to decorate a republican cake or, say, a 'legalise cannabis now' message?

I find myself very much in a moral dilemma over this topic.

If any child of mine should declare themselves to be gay I would wish for them the same happiness and joy from life that the rest of us have privilege and opportunity to experience. If for them, that would mean same-sex marriage, then so be it. In love and in all conscience I could not stand in their way.

My Presbyterian upbringing and the dual influence of Kirk and school leaves me, after some three score years and more, with considerable reservations on some aspects of the subject.
And whilst these years have, I hope, improved my tolerance and understanding of others I still find the more aggressive, and may I say intolerant, attitude and demands from some quarters of the gay community more than little difficult to support.

What gets me is that if a Christian refuses to do something on religious grounds, then he/she is pilloried.

If a Muslim refuses on religious grounds, the PC brigade, courts, and Europe support them to the hilt.

I don't give a monkeys one way or the other - I just believe that it should be consistent!

That’s one way of making a point Joe.

I very much doubt they would JimS. Being a cynic, I’m sure the Asher’s business was very well researched before the cake order was placed.

Very well said JRB. I too find sections of the gay community difficult to support. It would seem they intentionally go out of their way to humiliate those who have reservations about gay marriage. We are no longer allowed to express our opinions it appears.

Ah, but Christians aren’t a minority Dioclese - yet.