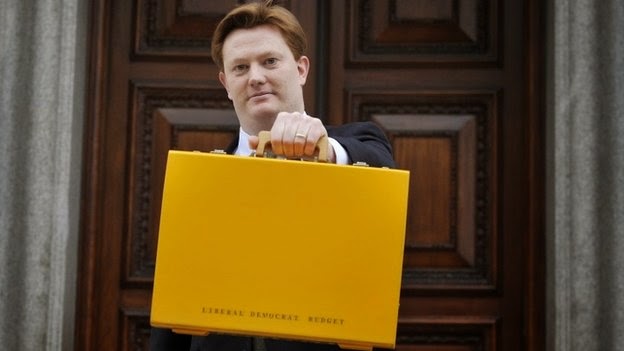 Whoever would have guessed there’s a General Election in a few weeks?

Initially I thought the campaign would be rather exciting but it has become the same old tedious nonsense with politicians attempting to smear those of a different view rather than show their supposed talents with proposals for a better Britain.

The most farcical stunt so far is Danny Alexander’s silly attempt at being Chancellor of the Exchequer and posing on the steps of the Treasury with his luminous yellow briefcase (above). An alternative budget?  We could all make up one of those.  On a more serious note, I was surprised it was deemed suitable for the House of Commons, but with so much of our laws now decided in Europe, our elected representatives have plenty time on their hands, so where were they? 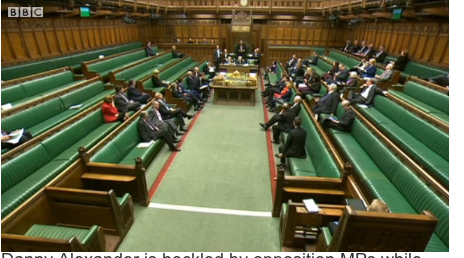 It seems Nick Clegg departed as soon as his party’s budget speech was over, but then he had other places to go, people to see, posturing to do.  All of this would be amusing if these people weren’t totally subsidised by us.

Meanwhile, I’ve read so many articles telling me what a lovely bloke Ed Miliband is, even if he does have two kitchens and prefers to keep the press confined to the spare.  I’m sure Mr Miliband is a pleasant man but I certainly don’t want him running this country.

David Cameron can’t be anything more than he is - a salesman.  Currently the media is still concentrating on UKIP so we’ve heard nothing too negative from Mr Cameron as yet; in fact we were given a tour of his kitchen to show that he enjoys sardine sandwiches for lunch.

Nicola Sturgeon is doing a good job and is receiving good publicity, although I’d suggest that some English journalists are finding it difficult to understand why the SNP is doing so well at the moment.  No time for laurel resting though.

Exciting times ahead.  I can but hope the two ‘big’ parties and the yellow one will be brought down a peg or three on election day.

This week has proven that politics at Westminster has hit an all time low.

The budget should have been a statement by our government of its financial intent. Instead all we got were a few well worn platitudes and some undefined sweeping generalities.
The opposition in reply were little better; it is becoming harder and harder to tell them apart.
Like that TV advert for Twix, one party spins to the right the other party spins to the left.

But the highlight – sorry – let me re-phrase that – the low point of the last few days was the pathetic and pitiful stunt of Mr D Alexander whose pretentious posturing and delusions of grandeur were, at best, embarrassing.

If nothing else, what the current run-up to the general election has proven beyond doubt is that a fixed term parliament is an unmitigated failure. For far too long there has been no effective government, but merely continuous electioneering and sniping, and that of a totally negative nature.

… and because politics at Westminster has hit an all time low, we here in Scotland have the opportunity to tell those mainstream political parties – enough is enough!!

Seems odd to stand shoulder to shoulder with the Tory Chancellor one day, while he delivers a budget that he necessarily, as Chief Secretary to the Treasury, had a large part in formulating, and then deliver an alternative the next day.

Did he not agree with the Budget he helped to put together? If so why did he not resign. It's not like the Budget isn't the cornerstone of the government's policies.

We can presumably infer that he doesn't believe in the whole ethos of the government of which he tells us he is a senior member.

As Hilaire Belloc put it so beautifully over a century ago:

The accursed power that stands on Privilege,
(And goes with Women, and Champagne, and Bridge)
Broke - and Democracy resumed her reign:
(Which goes with Bridge, and Women and Champagne).

We in Scotland have an excellent opportunity to stick it to both "major parties" and their LD hangers-on by voting SNP. This will also be one in the eye for the Better Together lot, and an appropriate response to all the abuse that is being heaped on us in England, in newspaper articles, comments and blogs.

There are things the SNP has done which I do not particularly like, including the intrusive legislation on the family and the formation of a national police force. They are, in their own words, Social Democrats, and I am not.

Even so, I will be voting for them, partly as they are a much more competent and honest lot than the Unionist parties (and the Greens are fruitcakes), but mainly to stand up for Scotland and to make a suitable two-fingered salute to Miliband, Cameron and the unspeakable Jim Murphy.

As a contemptuous believer that all politicians are hypocrites, at least the growth in popularity of UKIP provides an opportunity to invoke "Buggins' Turn".

They can't screw-up our country(s) any worse than the main-stream parties.


BTW - "Nicola Sturgeon is doing a good job and is receiving good publicity, ......"

Joe, do remember that the Daily Record is the organ of the Labour Party - which organ I am too polite to say on a lady's blog...

I was unaware of the Daily Record's leanings, thanks for pointing it out. I quoted it simply because of its regional location.

For the leftist angle, there's:

For the rightest angle, there's:

Well, Joe, the two arms of the Unionist media, the BBC and the UK newspapers, are two peeks at the same farce, as Mr Galloway so eloquently said (or words to that effect)

... and so the paranoia continues.

What on earth is happening?

With the election looming ever closer one could reasonably expect the Westminster parties to lay out before the voting public that which will be their policy for the future.

The Conservatives, Labour and now today the Liberal Democrats have been gripped by a collective hysterical paranoia that all things Scottish and SNP in particular is in some way inherently evil and must be avoided like the plague .

Are they really that scared of a few Scots who are not afraid to speak their mind?