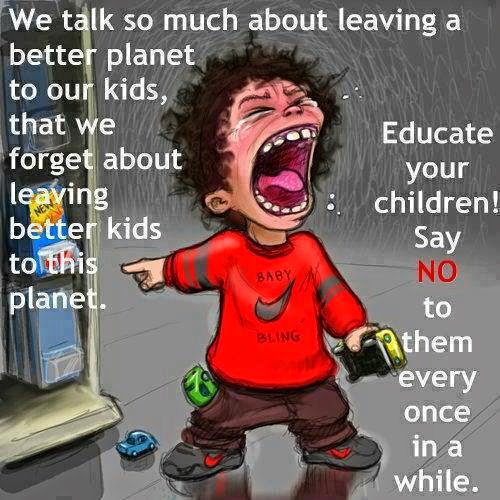 Her statement was a result of Ian Wood’s commissioned report recommending that employers play a far bigger role in schools and colleges.

Is this a sake of déjà vu?  How often have we heard the same result from the endless commissioned reports from ‘elite’ businessmen?  Has any politician taken on board the comments?  No.

The report recommends:
Enhanced careers education in primary schools
Unfortunately these recommendations don’t go nearly far enough.  Since I started this blog over six years ago, I’ve posted about the declining standards of education in our schools.

A radical overhaul is needed. Secondary modern schools need to be resurrected. We have too many young people forced into the ‘academic’ stream when they have little or no interest in many of the subjects.  Every child is forced down this path since the conception of these dreadful comprehensive schools which educators (awful modern word) and politicians thought would be the answer to the ‘class’ problem.  The ‘class’ problem was identified as one where children from poorer families were unable to attend local academies.  Of course that’s not true because many children did attend academies if their 11 plus results showed they had the ability to cope with an academic education.  In Dundee, those who ‘failed’ attended the secondary moderns which provided an excellent vocational education.

But this ‘segregation’ annoyed certain members of society and thus the ‘one size fits all’ - called comprehensives - arrived.  It was never going to be possible to fit every child into one school system and that’s the reason our standards are declining.  It’s nothing to do with poverty.  It’s to do with squeezing too much into one box and therefore having to slim down every article in the box.

I reiterate what I’ve said many times, we must reintroduce vocational schools for those children who have interest in vocational skills. It’s bordering on cruelty to have children sit in classes which have little or no interest for them.  Much better to discover their interests and allow them into a vocational school which can meet their needs.  Interest in anything is 60% of a positive result.

Having spent some time associated with formal education, my firm belief is that young people ought to be able to change from their comprehensive school programme to a vocational school around the age of 13 or 14, but no later.  If they’re left to fester in a comprehensive until they are 16+ then it’s too late.

If we don’t address this problem soon then Scotland will have a serious lack of engineers, craftsmen/women and other skilled tradesmen.  I know is my wee part of this lovely country quality tradesmen are worth their weight in gold.  My own (excellent) young electrician said he had nearly given up the idea of ever being an electrician because he was forced to learn subjects in which he had little or no interest.  He’s a smart lad who knew what subjects he required for his skill and worked hard at those, but was bored by many of the other compulsory subjects.

He’s one of the lucky ones.  His family saw him through the rough patches at school.  But many young people don’t have supportive families and I think emotional poverty is as serious as financial poverty.

Yes Ms Constance, we do need standards to be improved, but do stop believing it can be done under one roof.  Let’s return to our academic and vocational systems and also let’s allow teachers to teach instead of being stand-ins for social workers. There are parents out there who need to begin to behave like sensible parents but that’s not the job of teachers.

It pains me to have to take on the role of the elderly curmudgeon for whom ‘everything was so much better in my day – but with regard to education I firmly believe this to be very much the case.

Primary education is today total unrecognisable and IMHO a gross misrepresentation of what it should be.
As a child at primary school we were very much allowed to be ourselves; to play; to explore; to question. Yes, we were taught the three R’s, had our regular spelling and mental arithmetic test but perhaps most importantly of all there was instilled in us a love of the written word and a questioning mind. (Thank you Miss McC and Miss S)
There was never any questionable ‘enhanced careers education’ given or needed.

Sadly, I fear the experiment that is ‘comprehensive’ education has failed our children. It holds back those who can and deprives those who can’t.
The previous Scottish system of ‘senior’ and ‘junior’ secondary education allowed pupils to strive to be all that they could be within their peer group.

And universities do not deserve to escape criticism. In order to achieve ever higher funding they have taken in ever higher numbers of students merely to attain a desired head-count and not always on academic ability. Now many of these students find that their academic qualification is hardly worth the paper it is printed on and is no guarantee of any future career.
Similarly, once excellent ‘technical’ colleges have abandoned their proud past to become mediocre universities.

The Telegraph yesterday had an obituary on Hugh "Jimmy" James, who at the age of 19 in 1952 was piloting aircraft on crucial missions. Looking back to past generations it seems incredible what teenagers could and did do. Now the poor blighters are compelled to stay in large blocks and read books about what to do supervised by people whose life has been the same.

As a high school English teacher (formerly Scotland, now New Zealand) I agree with an awful lot of this blog post. Every year (in either country) I've had kids - mostly boys, but not always - in my senior classes who are forced to be there when it absolutely does not suit them. Neither country has provided a practical alternative for them in my subject - learning how to construct an effect CV and cover letter, how to construct different types of reports (to fit in with the types of work/industries they'll end up doing), how to communicate effectly with colleagues, how to be bloody innovative!! That's just in the subject of English, let alone all the others. I try to squeeze those aspects into the courses I'm expected to teach, but they're usually pretty full of internal assessments. :( I want to be able to make sure every pupil, at every year level, comes out of my class a more effective communicator, so that they can flourish in the next set of stages they'll go through in life. Alas, that's more challenging than you might think! the people who design these courses and drive changes are never people like me.

Of course there were faults with the system in our day but as you so eloquently say, most were able to fulfil their potential in school. Many of my peers didn’t go onto university in my day as that was thought to be ‘for the elites’, but we had the tools to progress.

Demetrius, may had to leave school at 16 in my day for financial reasons. I think we learned independence must earlier that the young do today. Perhaps I should call it survival instead.

We knew we would have no money if we didn’t work. No ifs or buts or safety net.

Hello SouthernOceanBlue. I don’t envy you being a teacher today.

Apart from having to cope with the lack of respect so many have (a friend’s grandchild was horrified when I said we used to have to stand up when the teacher entered or left the room), your curriculum must be a nightmare.

Congratulations on giving your pupils skills which appear to be invisible these days.

The blog displays appalling smug ignorance of the history of education in Scotland. The author is arrogant in her ignorance and churning out the kind of pap which Nigel Farage spews out. We never had 'secondary modern' schools in Scotland. Comprehensives were never 'one size fits all'. That was also unite by new Labour and Subrosa has swallowed it because it chimes with her prejudices. Comprehensives ARE the proper egalitarian way to organise secondary education. However, the Luddite power of the teacher unions has to be curbed. We need to shift the balance of spending in education to post-natal support of mothers, to preschool, nursey and early years primary. We need to increase the proportion of classroom assistants to teachers. We need to enhance educational provision beyond school for areas of multiple deprivation.

I assume that the problem is similar in Scotland to England, and is in part due to the closure of all the Technical Colleges and polytechnics and converting them to "pseudo-universities".
I went to grammar school but was far from being academically inclined and after taking my "O" levels transferred to a technical college. Although I wasn't formally an apprentice, I worked for an employer who saw me through my studies and in due course I got my membership of a professional engineering institution, something that I'd never have managed otherwise. It was working on the job which gave the impetus to gain the academic knowledge to make progress.
Sadly those days are gone, and now you need a "degree" for almost everything.

… to continue on the tertiary education theme, if I may.

This situation is no better exemplified than in our politicians, fresh faced youngsters with their PPE (Philosophy, Politics and Economics) degree tucked under their arm. All theory and more often than not, little or no practical experience or life skills.
These are the people who now formulate the education policy for our children and grand-children. Is it any wonder that the system is failing?

@ Alasdair (with 2 profile views) - what's the reason for your arrogance and smugness? You sound like you are from the government (hence the made-up profile to conceal your real identity).

The main fact is that children are being deliberately dumbed down to nullify their potential to upset the apple cart and stand up for themselves against increasingly totalitarian authority.

BTW, if comprehensives are the answer, what is the question?

"We need to shift the balance of spending in education to post-natal support of mothers, to preschool, nursey and early years primary. We need to increase the proportion of classroom assistants to teachers. We need to enhance educational provision beyond school for areas of multiple deprivation."

Government-speak, as I suspected. How much better it would be for young mothers to stay at home and stop pretending that state education from the year dot is the answer to our problems when families are the answer - you know, those building blocks of society which are indispensable to strong societies, yet so hated by governments because it takes the power from the state and delivers it to the people, where it belongs.

Young children should be looked after by the family, like my generation (50s) was, and the bloodsucking tentacles of the state kept out of family life for as long as possible.