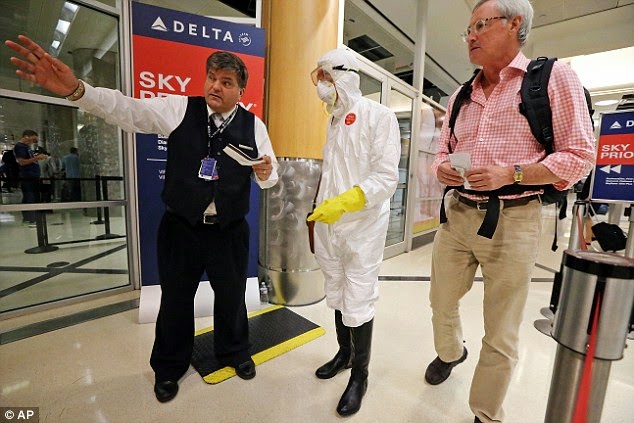 It never ceases to amaze me how readily our political representatives offer our troops as aid workers to other countries.

In the case of the Ebola outbreak in West Africa, already there is a team of over 40 military personnel, including logisticians, planners and engineers currently on the ground in Sierra Leone to oversee the construction of the UK’s facility near Freetown and develop sites for new facilities.  These new facilities will house more than 100 members of 22 Field Hospital and provide a 12-bed treatment centre for healthcare workers in Sierra Leone.

Let’s not bother about protecting our borders. The Health Secretary doesn’t think a quick test of those arriving from the affected countries would be useful. Much better headline grabbing by sending military medics to the scene.  Our military medics are the ‘elite’ of all UK medics and as they have only one hospital in which to practice their skills nowadays - the Queen Elizabeth in Birmingham - they will do a good job in Africa, but what about the problems nearer to home?

It’s very thoughtful of Westminster to be so benevolent when there continues to be a serious crisis in one of Scotland’s hospitals.  Aberdeen Royal Infirmary has had staffing troubles for many years.  I don’t know the politics of healthcare in Grampian but I do know this major hospital provides care to a widely spread population as well as the city of Aberdeen.

The Daily Mail reports the CEO of the GMC stating there is a shortage of doctors in some parts of the UK ‘especially deprived areas’.  But Aberdeenshire is not a deprived area.  It is the oil capital of Europe and very wealthy indeed.  Why wouldn’t young doctors want to live and work there?  Apart from their working environment - which is dismal throughout the public areas - the quality of life in the area is good. Seems they prefer the lifestyle of Australia and New Zealand.  Yes, we continue to give excellent training to student doctors yet once they’re qualified they’re off to the sun. A simple solution to this brain drain would be to include a clause in their training contract which states they must serve the NHS for a specific period upon completion of training or refund their training costs.

Back to Ebola.  My friend Leggy has his take on it. I’m too old to be concerned about Ebola.  My chances of coming into close contact with anyone from West Africa is more or less nil, but as Leggy says Fear is a great political tool.  We saw how effective it was on 18 September didn’t we?

There are just two beds in the UK properly equipped to deal with such infectious diseases, at the Royal Free Hospital in Central London.
In the past couple of weeks, officialdom has changed the possibility of Ebola cases in this country from "highly unlikely" to "some cases are inevitable", yet still nothing is being done.

The reason for doctors leaving, according to a friend whose son and daughter-in-law, both doctors, have gone to the USA, is the NHS, its Administrators and endless paperwork which has reached the point where they spend more time on paperwork than patients. My own GP said much the same to me before he recently took early retirement.

EP, I did look for a photo of more infectious diseases beds but on;y found one of the two you mention. Decided on the one of the doc in the US protesting.

Another reason I’ve heard is the curtailment of hours. They need to put in the hours if they want to get further up the ladder to consultant. My GP isn’t overworked. Most in my 9-GP practice work part-time.

In 2012 (the last year for which we have figures) 7,500 people died of heart disease in Scotland.

In the winter of 2012/2013 an additional 2000 people above the seasonally expected norm died in Scotland. (ie from flu and/or hypothermia)

… there have been no Cobra meetings chaired by the Prime Minister ; no gathering of heads of state to discuss these figures; no sending in the troops – just a silent and unemotional acceptance.

Tragically there have been some 3,500 deaths from Ebola world-wide; luckily only one British Ebola victim, William Pooley, who was brought back to the UK for treatment and happily survived.

However …
What we are now witnessing is the near hysterical intervention of publicity seeking politicians content in their irrational and irresponsible politics of fear.

Let us be under no illusion, Ebola is a highly dangerous, highly contagious viral infection with a high mortality. It possesses the potential to breakout into a world pandemic.
The treatment and containment does require global resources which should be the province of the World Health Organisation (WHO) in conjunction with leading leading health providers eg NHS in UK,and medical charities such as Medecins Sans Frontieres and the Red Cross.

What the world does not need right now is hysterical politicians – they would do well to keep quiet and just sign the cheques - and leave it to the medical professionals.

Aberdeen, NHS Scotland, devolved powers. Where exactly does Westminster figure in that?

Or is it like BBC sportspeople - British Winners, Scottish Losers?

The reason that our forces are often first to be deployed is because that is what they are there for. I'm not even sure that the MOD even realises that they are really in the insurance business and like insurance we can never be sure that it was worth paying the premium when we make no claims.

I just love the way America says the world should do more on Ebola, so the Brit rush to send hundred of personnel out there and the Americans rush to seal off their airports.

The problems you outline with the NHS in Aberdeen is not of course an isolated case. The NHS as I can attest from my own experience is dysfunctional and not fit for purpose. Especially in Scotland and Wales as it is not looking to reform and/or modernise the NHS. England's NHS is being changed whether for the better only time will tell but at least from my own knowledge of an healthcare system in another country that performs considerably better it appears to be going in the right direction. The fundamental problem that makes the NHS NOT the envy of the world(and certainly not the holy cow that people believe it is but a sick cow) is the way it is funded and the provision of it. England is at least attempting to address the provision problem which of course Labour will reverse next year when RedEd enters no 10. Another problem faced by any healthcare system is of course that as treatments become better and more regulations are foisted upon it the whole service becomes more costly. Already those costs are becoming more than taxation etc can sustain. So eventually the lefties will have to accept the reality that healthcare cannot be delivered totally free or be run predominately by the state (although they are not renown for accepting anything that threatens their ideological absurdities).

JRB, thank you for your detaile comment. I wasn’t aware of the accurate figures.

Very true, politicians are doing their best to create fear. It controls.

Interesting your comment about Aberdeen. Ninewells doesn’t appear to have a similar problem. Would that be because it is now classed as ‘the largest teaching hospital in Europe’?

JimS, I don’t think I mentioned Westminster had anything to do with the situation in Aberdeen. It is a Scottish Government problem as you say. My point was why does Aberdeen have this problem. Is it because the NHS isn’t funding it appropriately or for another reason.

Antisthenes, some good points there. For years now modern treatments have become more and more expensive. As we know many hospitals have equipment bought for them by kind fundraisers, but then in some cases the said equipment is hardly used.

Take MRI scanners. 9am to 3pm 5 days a week on my local hospital. The waiting list for MRI scans is long yet these expensive machines sit idle for most of the week.

I’ve long been in favour of a type of health insurance such as Germany and Switzerland provide, but as you say the lefties are shrill in their faux outrage at the very suggestion.