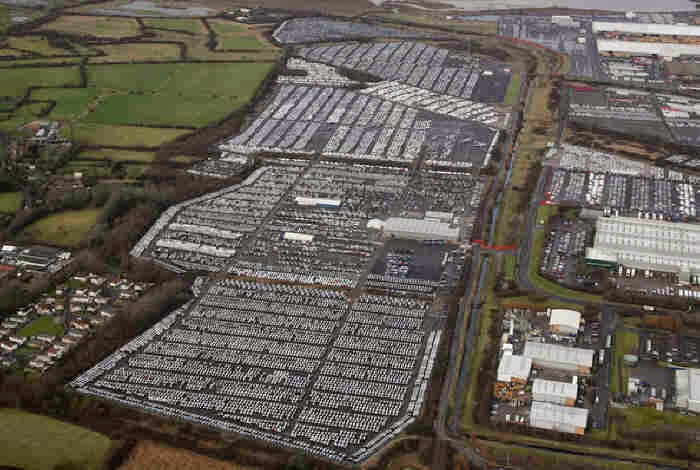 I was astonished to read this article. Millions of brand new cars are sitting in car parks/fields/any spare piece of land, all over the world.

The UK hasn’t escaped either; the image above is Swindon where thousands of cars sit waiting new owners who don’t exist.

Nowadays I don’t know anyone who buys a new car, do you?  One acquaintance has a ‘new’ Peugot but it was used as a demonstrator and had 3,000 miles on the clock when she purchased it.  She appears to be happy with it although she was slightly disappointed to find the model is older than she was led to believe.

One solution would be a scrappage programme which would include tax rebates for new cars. The last one the Uk government introduced in the 2009 budget offered owners of old cars £2,000 (half from the government and half from the motor industry).  However, in 2009 a new car, similar to my own, cost around £12,000 and like many pensioners on a fixed income, I have better things to do with £10,000 than spend it on an item which greatly diminishes in value the minute I leave the shop.

Maybe Alex Salmond could promise every family a brand new car for £5,000 if they vote for independence.  Now that would be an incentive!
Tweet
Posted by subrosa at 09:12

What,s not to like vote yes and receive a new car for less than it's proper value. After all others are paying the difference and they are only the tax payers after all.

We only buy ex demo motors.

"That Zero Hedge Article On Unsold Cars Is Bullshit"

Even rehashes part of a Jan 2009 article including images!

If only one of these sites had a 1991 spec Fiat Panda 4x4 waiting for a new owner - always assuming it hadn't already disintegrated into a pile of rust...

Just wait till we all go onto electric cars.

Zero Hedge reads like an un-amusing cross between the ‘National Enquirer’, ‘Mad Magazine’ and ‘The Economist’ but only purveying tales of gloom, doom and despondency to its readers.

Me thinks this article is a gross over-exaggeration and hype of the actual true facts, merely to induce concern and fear of some impending economic crisis in the motor industry.

On a personal note – I looked at a new car recently, but decided against it – why? – because new vehicles are now made to order. I had to choose model, spec, colour and any add-ons; then wait up to four months till it was manufactured. I opted instead for a second hand model, saving quite a bit.

I think it was 1982. I had not long started my own business and decided things were going well enough to buy a replacement for my wife's VW Beetle which I used to start.

It was a red Austin Maxi and, by that time, really a very good car. They had put in a VW gearbox and it handled very well. Their reputation was crap and they couldn't sell them. British Leyland registered quite a few and sold them to dealers by auction. I think I paid £4,000. It lasted for over 100,000 miles without any problem . If only they had got it that right from the start, what a world-beater it would have been!

I also managed another ripping wheeze (since stopped by the Revenue). I had a friend in farm equipment leasing. My cash flow was good, so I leased the car for a year, paying (I think) about £4,400 in rental and repayment over 12 months and could set all of that against tax (instead of 25% of £4,000 if I had bought it). After that there was a peppercorn rent to pay for as long as I kept the car and the finance company did not want anything from the sale when I got rid of it - for £1,200 as I recall.

It was a very busy happy time and that was one jolly good deal.

Was that reprehensible tax avoidance?

I can categorically say that the image that is allegedly Swindon, is definitely NOT Swindon. I live within a mile of the Honda car plant, know the area well, they do have areas for parking new cars on, but they look nothing like the area shown in the picture, check out Google maps satellite views of the Honda factory if you want, you'll see exactly what I mean.

I wouldn't believe anything in that piece at all.

Antisthenes, the tax payer is paying people to work to produce them then they’re being left to rot by all accounts.

I used to do Rightwinggit but now opt for something around 2 years old. My banger has another few years left in it. It’s only 10 years old. :D

Auch Joe, you’ve spoiled the fun. There are plenty unsold cars sitting around though. Happen to ask a dealer friend yesterday and he admitted there was a problem.

Our favourite words ‘if only’ microwave.:D

Depends upon the make if they’re made to order JRB - so I’m told anyway.

You’ve made a sensible decision. I’ve never understood why folk buy new cars then lose thousands once it’s driven out of the garage.

gerry p - we don’t use such bad language in here lol.

I remember that tax Edward. It was a great deal at the time. Pity it was stopped really isn’t it.

Thank you Sobers. I don’t know Swindon well so I accept your comment. Mind you I wouldn’t have another Honda if it was free. Had terrible experiences with 2 Hondas in the past and the company were dreadful.

@ Edward Spalton - another vote for the Maxi. We had 3 in total - father bought one when his Ford Corsair was no longer big enough to cope with a growing family. Then a second (in red as it happens) which he passed on to me. I sold it with 125,000 on the clock and lots of rust, but the old guy who took it on ran it for another 2 years! I replaced that with a 1750HL which finally went to an enthusiast wanting a donor car with 136,000 miles showing. It spent so much time ploughing across muddy fields, and pulling gang mowers, that friends and family kept telling me I should get a 4 wheel drive. My car dealing brother-in-law took a Panda 4x4 in as a trade in and let me have it for £500 cash. That gave me ten years and 60,000 miles service, and donated parts to the second one that I'm running now... Slow, crude and noisy, but simple and easy to fix. Also capable of pulling more than twice its own weight up snow covered hills! Would I have a new car (even if I could afford one) - NOT LIKELY.

As a 'traditional' environmentalist I have a strong aversion to the throw away society. If the thing works well the sensible thing to do is keep using it and get the maximum use out of the materials, labour and build costs.
The scrappage scheme was a dreadful waste of resources. It saw well-off people scrapping perfectly good, often low milege cars to get the allowance while poorer people, running even older and worse cars and desperately needing a better car, were not only unable to benefit but found older cheaper cars scarce and more expensive.