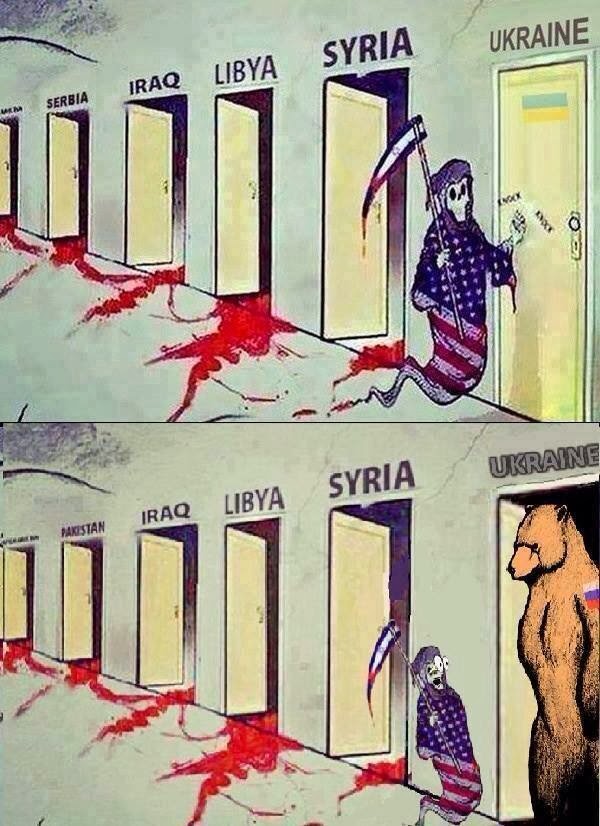 Whilst a foolish member of the Labour-run Aberdeen Council proposes to ‘ban’ Alex Salmond and his government ministers from council estates and all council property, tensions are running high in Crimea.

It seems part of the problem is identity. Russia and Ukrainian forces have always worked together in Crimea as part of the deal worked out when Ukraine got independence from the Soviet Union in 1991.  All over Crimea people are being forced to choose their identity - Crimean, Russian or Ukrainian.

Who would have thought that more than 20 years after the collapse of the Soviet Union these issues of identity and power would reassert themselves so dangerously?

I confess I understand little about Putin’s reasons for his behaviour, other than what I’ve read in the oft-inaccurate press, but some bloggers and commentators have attempted to give their opinions. Craig Murray offers a little history and James Delingpole wonders ‘Why are people so hot for war with Putin?’

Perhaps the image below is one reason and the Washington Post has its take on it too. 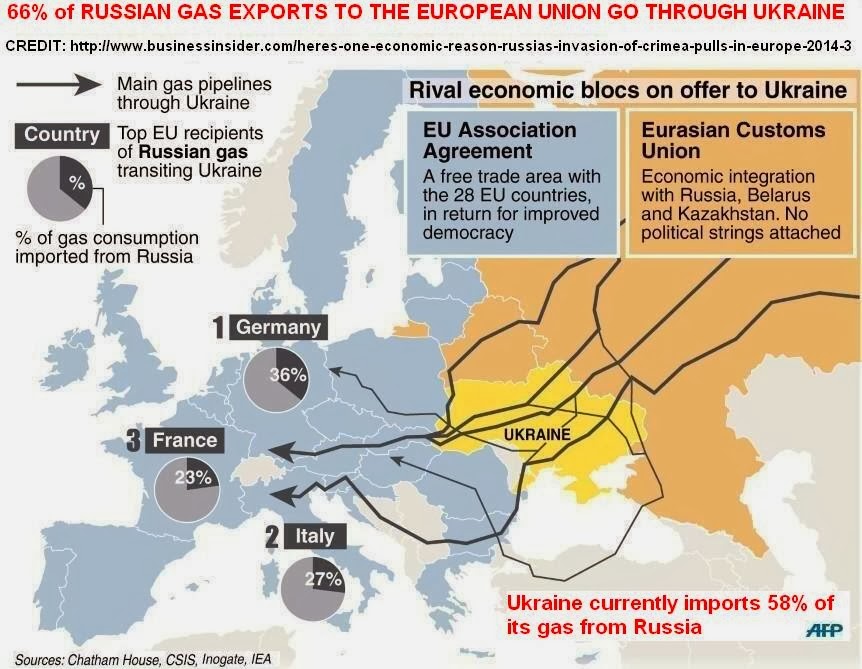 Could this be our future …

The Gas-pipeline diagram omits a small but significant detail.

Russia / Gazprom long ago realised that they were to the political whims of other states if their gas was shipped overland to it's primary market.

That's why it built the Baltic Interconnector / Nord Stream, to bypass all 3rd-party countries, and ship gas direct from Russia to Germany.

Initially (8th Nov 2011), the pipeline was able to deliver 27.5 billion cubic metres (970 billion cubic feet) of gas pa, but this capacity was doubled once the second pipeline was finished. Construction of the second line was completed in August 2012 and it was inaugurated on 8 October 2012.

No wonder Putin is behaving as he is - he knows there is nothing the West can do about his stance. When history shows that every time the West meddles in the affairs of other countries, bloodshed occurs, often on a horrendous scale, why do we keep on doing this?

The EU in it's infinite wisdom knowing that it can ride roughshod over it's own member states decided that it could do the same with non member ones to. It forgot many things. It forgot that Obama is an incompetent left winger and the politburo in Brussels is just as incompetent and left leaning and both had plenty of bark but no bite. Gone are the days of Reagan and Thatcher whatever you may think of them they new when and how to pick a fight and win.

Do not prod the bear.

Ashton needs to be careful, she was on the red payroll at one point.

I don't know that it is a petty tension - to kick against the increasingly regal nature of the tribesmen's conduct. Salmond is a cheesy, soundbiting charlatan, his squalid trade learned in the bars and knocking shops of Westminster for which he has far more affection than he does for Scotland and Nicola Moustache is a hideous, motormouthing harpy, a grotesque, spit-flecked bully. They should not turn up unannounced at council facilities, upsetting the children with their ridiculous photo-opportunities. Patriotism, ms rosa, it IS the last refuge of the scoundrel.

Scotland is one thing but I cannot pretend to any knowledge of Ukraine, or is the Ukraine, save to say that whatever William Hague says in his dreary, over-articulated fashion will be horsehit, horseshit aimed at deflecting attention from the increasing criminality of Ten Downing Street.

Some queer folk out there and I'm not referring to the situation in Ukraine nor sexual predilections.

It's obvious Russia has the same attitude towards what it calls its permanent interests as those proscribed by perfidious Albion.

It could well be JRB.

Hi Joe, thanks for the extra, important information. Do hope others read your links.

No idea here Elby and I agree with your second paragraph.

Good points Antisthenes, many thanks.

Thanks for qualifying your comment with ‘allegedly’ Rightwinggit. Best to keep things legal.

Articulate as always call me ishmael!!

I didn’t think it so obvious Crinkly. :)