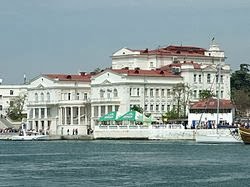 The following is a letter recently published in Edward’s local paper.

There is more than a whiff of 1914 in the air as Germany, under thecloak of the EU, presses boldly forwards into the Ukraine. The policylong pre-existed today's  European Union..On September 9th 1914, the Imperial Chancellor of Germany , Theobald vonBethmann Hollweg, asserted Germany's war aims."Russia must be thrust back as far as possible from Germany's bordersand her domination over the non-Russian vassal peoples broken...We mustcreate a central European economic association through common customstreaties to include France, Belgium, Holland, Denmark, Austria-Hungary,Poland and perhaps Italy, Sweden and Norway."This association will not have any common constitutional supremeauthority and all its members  will be formally equal but in practicewill be under German leadership and must stabilise Germany's leadershipover central Europe"Now, of course, we do have a "common constitutional supreme authority",the EU Commission, as our own real government for most things. YetWilliam Hague talks about bringing  "democracy" to the Ukraine when hisown so-called government had no power to prevent large parts of Somersetbeing flooded on the orders of EU environmental Regulations andDirectives.The "Weltanschauung" (way of looking at the world) by the Germanpolitical class existed from at least 1848, before Germany was a unifiedcountry. The delegates of the Frankfurt parliament then resolved thatthe Balkans were part of "Germany's natural economic hinterland" andthat no significant Slavic state should be allowed in the area. In 1999,after a generation of destabilisation by the German secret service,Yugoslavia was destroyed by NATO  air power - with our assistance.Now Russia is more assertive and this sort of push-over cannot occur.The Crimea was part of Russia but made part of the Ukraine in theFifties when the change was rather like being moved from Derbyshire toStaffordshire. Now it is an international boundary.Yet Russia's main warm water, Black Sea naval base is in Sebastopol inthe Crimea, where most people speak Russian.As the Americans say - Go figure!Yours faithfullyEdward Spalton
Tweet
Posted by subrosa at 09:06

There is more than a whiff of anti-German feeling in your letter.

Since the start of the crisis Germany has been far more cautious than many other nations, especially the USA and the UK.
She has urged her EU partners to give Putin more time before punishing Moscow with tough economic sanctions.

This stance not only reflects Germany’s heavy dependence on Russian oil and gas but also her fear of the political consequences of an isolated Russia.

It was only yesterday (Sunday) that for the first time Merkel delivered a rebuke to Putin, telling him that a planned Moscow-backed referendum on whether Crimea should join Russia was illegal and violated Ukraine's constitution.
(http://uk.reuters.com/article/2014/03/10/uk-ukraine-idUKBREA1H0EM20140310)

Times have changed and for better or worse the world has moved on.

There are enough skeletons hiding in the cupboards of global corporatism and dominance that the need to dig up relics from the past is a useless exercise.

In a video which appeared on this blog a while ago, I was interviewed by a serious young American journalist and said that I expected Russia to resume possession of the Crimea in response to Western destabilisation in the Ukraine. I also said that I thought things would settle down in the medium term because of Germany''s need for Russian gas to keep the lights on and the wheels turning and of Russia's need for the money. I hope the second part of the forecast proves correct.

The geopolitical outlook of an influential part of the German political class has been remarkably stable since the very successful establishment of the Zollverein (a "Common Market" ) in the 1830s and 1840s between the then many German states. The planners always saw the need for " an economic hinterland" of surrounding less developed territories as a source of raw materials and market for German manufactures. This "Grossraumwirtschaft" ( large area economy) occupied the European Lebensraum or living space. They still talk in those terms and politicians and industrialists openly talk today of the " benevolent hegemony" which Germany exercises over these areas.

I do not think it is at all in our interest to be part of this project nor to pay a penny piece towards it. It can only drag us into more "border wars" on the Yugoslav and Ukrainian pattern whenever German political will to expansion meets a contrary will of similar determination . I don't think this realism makes me anti-German, any more than opposing that damned silly war in Afghanistan makes me anti British!

The Americans too admit ( even boast) of spending 5 billion dollars on the destabilisation of the Ukraine and that will buy an awful lot of politicians ( and street thugs) in any country. The intercepted phone conversation between the Estonian foreign minister and Catherine Ashton has hardly rated a mention in the West. In it, he said there were strong grounds to believe that the snipers who killed people on both sides in the Maidan were hired by the insurgents. Eight ministers in the provisional Ukrainian government come from parties which can truly be described as neo Nazi and they hold portfolios in police, justice, defence etc. The most chilling report I read was in the respectable Israeli media on March 2nd that Ukrainian rabbis had urged all Jews to flee Kiev. You won't hear that on the BBC either! In the last year the European Parliament expressed its abhorrence of these Ukrainian extremists: now they are welcomed with open arms and Mr Hague tells the Commons what fine fellows they are - but, of course, on any matter where the EU has a " Common Position" he is only Catherine Ashton's errand boy.

Edward the Zollverein you refer to was to a great extent meant to mirror the advantages Britain gained through colonisation.

And, while I can accept the possibility of the insurgents initiating a tinder strike I cannot accept on face value any report sourced from the Israeli's. What I do find strange - if not abhorrant - on the part of the EU is that they should offer a bribe of billions of Euros for Ukraine to join; while Scotland, already a member in all aspects bar name, can't get a straight answer to a simple question.

It seems the EU prefers to play the real-politik game to the detriment of its already deficient democratic process.

Crinkly,
You are quite right. Reichsminister Walther Funk made exactly the same point about the Zollverein in his 1942 lead paper for the conference " Europaeische Wirtschaftsgemeinschaft " which I translated . It appears under the title " The EU's Evil Pedigree" on
Www.freenations.freeuk.com. I also recommend the German website www.german-foreign-policy.com for topical reports. The editor is a very conscientious journalist , as indeed are many in the Israeli quality press.

I have not verified the report but Senhor Barroso has reportedly announced a loan of 11 billion euros for the Ukraine. The EU Association Agreement which this provisional government intends to accept ( although it has no democratic mandate) will be disastrous, wiping out Eastern Ukraine's industry which relies heavily on Russia and enforcing austerity which will make Greece look like a picnic .

Edward - it would seen Russia for its part has learn't a few lessons from the abuses it suffered under the Chicago school. Unfortunately it has chosen to adopt rather than counter them.

As to my comment re: the Israeli's -if its made by a journalist then it may have some integrity - even ours are not all brainwashed nor in subservience to the salary cheque.

With regard to the Ukraine; who knows -politics makes it hard to define between saints and sinners until such time as they're handed the power to either use or abuse. The one certainty is that the solution lies between Russia and the Ukraine and in that light while the world will make sympathetic noises to the Ukraine it would far rather Russia just got on with whatever it wanted. Then of course the righteous would be free to pontificate on the result.

Crinkly,
Assuming the EU prevails, when the Ukrainians wake up from a generation or more of economic winter they will find that all the profitable assets belong to foreign corporates - many or mostly German.

One thing about Russia - it is not burdened with mega trillions of debt - so, of course it is a danger to those who are.

Actually Israel has just about the only free press in the Middle East. It is probably racist stereotyping to say so but Jews do tend to be argumentative - so a wide range of views appears. So with all the usual caveats, I sometimes cross check with them.

With regard to foreign corporates Edward -is the UK any different?

And while I wouldn't claim Al Jazeera is perfect, it is reasonably objective in its approach, is based in the Muddle East and publishes the views of Jewish contributors.

Oh Dear! Ukraine is the Germans fault is it? Nothing to do with all of the foreign NGOs and political charities funded by Soros and the Elite Bankers just like in Syria, Libya, Egypt etc etc etc.

The two major players behind ALL of these treasonous unlawful undermining of these other countries governments is the US and UK including the Ukraine. Our political parties are all controlled by these Elites and carrying out THEIR agendas - NOT ours. Everything that is happening just now is deliberate including our countries massive debt SCAM with the connivance of ALL of the controlled political parties.

Billy,
In an article of a size acceptable to the Derby Telegraph it is quite impossible to cover all the angles. The editor of the German website www.german-foreign-policy.com gave an interesting speech in the House of Commons some seven years ago which you may find of itnerest, entitled "Germany's Bid for great Power Status through the EU"

Richard North recently covered the various EU departments and NGOs with their fingers in the Ukrainian pie on
www.eureferendum.com

The Americans have proudly admitted to spending 5 billion dollars on destabilising Ukraine and that buys an awful lot of politicians and even more street thugs.

There is a great deal of back pedalling going on in Germany just now. A senior CDU politican called Wimmer has made a most remarkable speech, saying that the situation was becoming like 1914 - and blaming the USA and Britain ("the Anglo-Saxons") for leading Germany astray, initially in the Balkans in 1999! I haven't time to do a proper translation but can send the recording to Rosie, if she wishes.

More significantly, the former SPD Chancellor Gerhard Schroeder has weighed into the argument behind Putin - but he is, of course, a director of Gazprom.

In my videoed interview of five years ago, I predicted that Russia would not suffer the possibility of losing its warm water Black Sea naval base in Sebastopol and might well seize the Crimea. I also predicted that things would then settle down because Germany needs Russian gas and Russia needs the Germans' money. I do hope the second prediction turns out to be true.

We may see a return to German observance of Bismarck's prime rule of foreign policy "First make a good treaty with Russia".