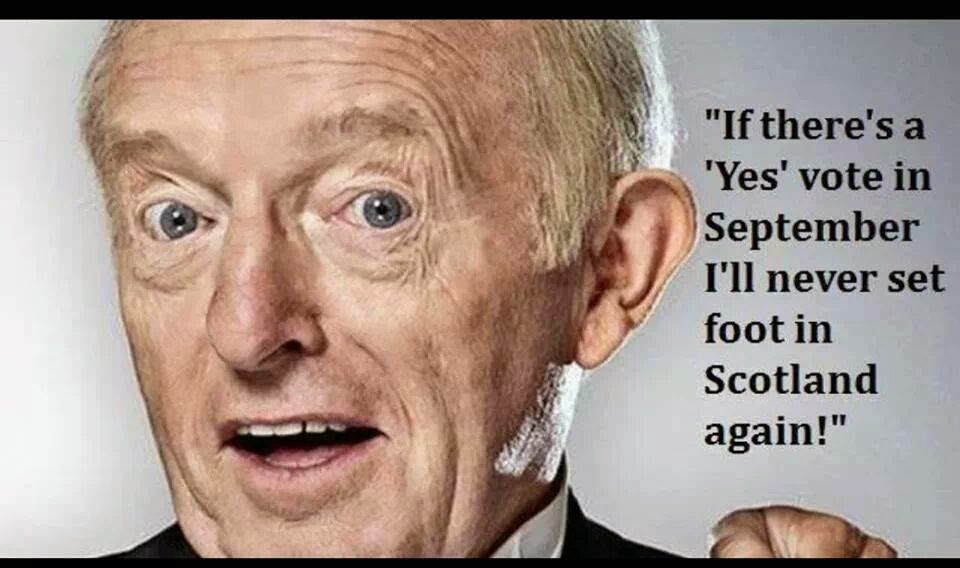 Another reason to vote YES!
Tweet
Posted by subrosa at 09:03

I think it’s an excellent reason to vote Yes JRB. :)

I wish it was Rightwinggit.

If Scotland becomes independent, I'll be able to visit a foreign country without having to go overseas!

I think he promised in 1997 to leave Britain if Labour won the election. I suspect that rather like Michael Cain he was afraid that they might take some of his precious money (an unfounded fear).

I also think that he stayed put despite Blair's landslide. Maybe, of course, Blair's right wing, City friendly agenda was designed to make him stay.

It seems to me he is a bag of wind. I've never seen him perform, but for what I read he was, in his prime, some 40 years ago, a rather unfunny little man.

I can't imagine what kind of ego it takes for a has been prestidigitator to imagine that his threat to never again set foot in the country would hold any sway with anyone.

I have the occasional bit of banter with him on Twitter about his atheism. I'm trying to persuade him otherwise, of course.

He once left a comment on my blog. Will he stop doing that as well if we get indy-pretence?

But, sorry, P.D. refusing to step north of the barbed wire/mined independent border is still not a good enough reason to vote for our demise as a neglected backwater 'region' of the EU.

It might mean something if I knew who he is?

Arguably the most famous man of the 1980s. Right up there with Keith Harris and Orville.