Are We An Uncaring Society? 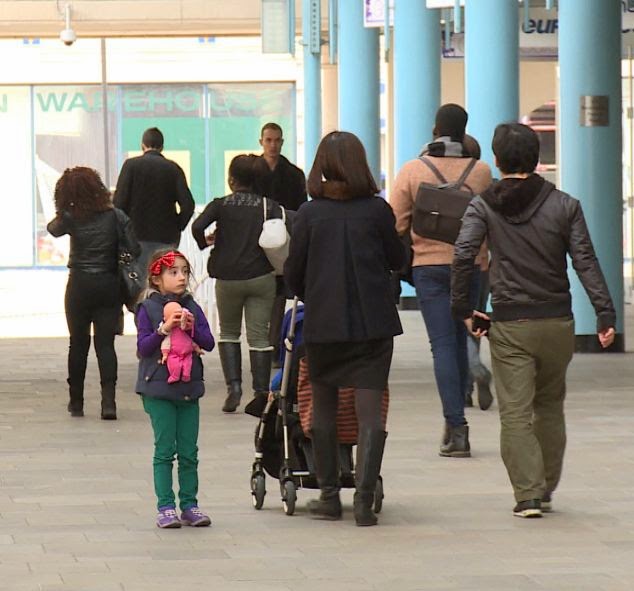 Today’s Daily Mail has an article about how our society has changed in the last 40 years.

As part of a social documentary Channel 5 television, with the permission of two young girls’ mothers, filmed the wee girls as they stood, acting lost, in a busy London shopping centre.  In the hour the wee girls participated in the experiment 616 people walked by - some even veered away in an effort to purposely avoid them.  Only one person stopped to ask if help was needed and she had initially walked past, but thought the better of her action and returned to ask if the wee one was lost or needed help.

Left-wingers are outraged (read the NSPCC’s comment) that this can happened today but forget that it’s their protests and complaints over the years that have produced a society where adults are afraid to approach a child in case they end up in court or, worse still, in prison.

Even in the 60s I found London an impersonal and unfriendly place so it’s little wonder similar attitudes are still present today, but what if the experiment had been carried out in Manchester or Newcastle.  Would the result have been the same?

Fortunately I live somewhere which hasn’t changed too radically since I was a child and a lost-looking child would be noticed and helped but very possibly only by women. Most men I know would not approach a young girl for fear of being accused of molestation or worse.

A sadder result of this experiment is that not one of the 616 attempted to find a policeman/woman to help the girls.  In my local town, since the introduction of Police Scotland, police are rarely seen.  The local office has been closed and their base is now nearly 20 miles away.  Their presence on the streets each weekend used to help keep the daft behaviour of teenagers in check, but in the past months they have been more or less invisible after 10pm.

Are we uncaring?  I think, in general, we’re not, but we’re certainly a society that lives in fear rather than friendliness these days. Instead of the adage ‘It’s better to do something than nothing’ the reverse not seems to be the norm.

As most readers will know, I am not in the first flush of youth and would certainly not pass as A1 fit.

Some time back (the tail end of last year) I was in the ‘big’ city when, for whatever reason I stumbled and went a purler. Basically I came crashing down without time to react or break my fall. I lay there stunned, dazed and bloody sore.
All the while the people just walked past.
Until that is, two young girls, very early teens if that, came over to help. They were kindness and consideration itself.
And all the while the people just walked past, or, by now, stopped to stare in idle curiosity.

Will these youngsters, like the rest of society, have the benevolent innocence knocked out of them?
And will they join the throng that just walk past?

Has fear of bureaucracy and political-correctness finally done for the ‘Good Samaritan’?

We live in strange times where, in cities in particular, we seem to prefer anonymity yet publish our most embarrassing moments on Facebook to the world!
The un-married mother once might have been a source of family shame but would have remained in the family home, probably in company with her aunts and grandmother! Now she will be placed in 'social-housing', hidden away from her abusive boyfriends and her own mother, who is probably having an affair with one of the boyfriends! An extreme example maybe, but it is the way we are going and seemingly actively encouraged by our politicians.
Certainly it is a lot different from my childhood when all mums appeared to be stay-at-home housewives, constantly on the look-out for misbehaving/lost children of the community, as they went about their daily trips to the shops etc.

As you say the left have made us frightened to help because we know that kindness these days can have disastrous consequences the most innocent of actions can so easily be misinterpreted or taken advantage of. However it runs deeper than that the lefts/progressives influence has also changed society by dumbing down and by mismanagement and greatly increasing the role of government that has in turn reduced standards and values of society to a level not seen for a couple of centuries or more. You admonished me once for saying that people no longer practised personal responsibility because now the state has relieved us of it. Well what happened here demonstrates how right I am as people now do not practice any responsibility and now think a little girl being lost in this way is none of their business and it is down to someone in authority to deal with it. A few decades ago this situation would have had a completely different outcome and people would be falling over themselves to help and would not rest until the little girl was seen to be in safe hands.

Some time ago I was driving home after a dance and saw a young female staggering along the pavement.
Her tights were laddered and there was blood on her legs and face.
However she was holding her head high and almost defiantly proceeding on her way.
I was on my own in the car, and I decided not to stop and offer help.
I could have assured her that I wasn't a threat, but why should she trust me or any man?
A gentleman would say that he was a gentleman, but so would a cad.
Now a few years older, I would stop in a similar situation, and would not take it amiss if I was told to get lost.

XX JimS said... Certainly it is a lot different from my childhood when all mums appeared to be stay-at-home housewives, constantly on the look-out for misbehaving/lost children of the community, as they went about their daily trips to the shops etc.XX

But then, they would have spotted a child "Not from around here." Now you just do not know if you have been living withing meters of most people.

One of our neighbours, only 30 or so meters away, was with a 10 or 11 year old a few months ago, and I asked if it was a visiting raltive. "No, she is our daughter and has lived here all her life.

It is the first time I have ever seen it! And I am not the only one of our neighbours that have said the same.

Sometime last year I was waiting outside a local shop for my wife when a toddler rushed past me straight towards the road. I grabbed him as he stepped off the kerb into the road, but got a mouthful of abuse from his mother who up to then had been too busy gossiping with a friend to notice what her offspring was up to. Apparently I was the sort who should be locked up, she was going to call the police, etc. Fortunately, another woman saw what had happened and intervened, but still not a word of thanks for possibly saving her child's life.
Would I do something like this again in similar circumstances? Common sense says that I should not but I imagine that I probably would. But I can fully understand people ignoring these children, especially as they were in no immediate danger.

I felt very sad that you had such an experience JRB. Yes, I do think it’s fear of democracy and the PC brainwashing that has reduced us to uncaring for our fellow man.

How right you are Jim. That’s one reason I dislike cities these days. I feel very isolated in them and do my best to avoid them - particularly London.

Did I admonish you Antisthenes? Oh dearie me, I do apologise. I certainly agree with you that the state has dumbed society down and reduced our sense of personal responsibility.

It goes to show how some value what they call their privacy without seeing the bigger picture Furor.

There are parents and there are people who have children EP. You appear to have met the latter don’t you? I’m sure you’d instinctively do it again. Some of us still have what we would now call old-fashioned values.

Quite. Yet these people would be the first to shout "Why did the neighbours not notice anything wrong" when some kid is found in a flat battered to death by the "parents."

Many many years ago, I wuzz a student. Scruffy and unshaven, albeit well washed. And one particular sunny day, I was walking down in to a rather busy Princes Street Gardens in Edinburgh, right at the west end. A couple were walking up and a wee girl was standing at the bottom of the steps looking up at them.

I pointed out to them that their daughter was having problems getting up the steps. "Not ours", they said.

Admittedly, my first thought was "why is there never a cop around when you actually need one", but, taking a firm grip on my nerves, I knelt down and had a chat with the lass. Who didn't know where her mummy was. Sighs ...

So I walked with her and, eventually, we found Mum and Granny. Who had thrown wee lass out of her side of the dual buggy to put the shopping in. And hadn't realised she was gone. They were right at the other end, in the benches under the floral clock.

At least I didn't get screamed at. Wasn't thanked either, mind but given the continuum of the possible, the lass safe and me not in handcuffs counts as a success.