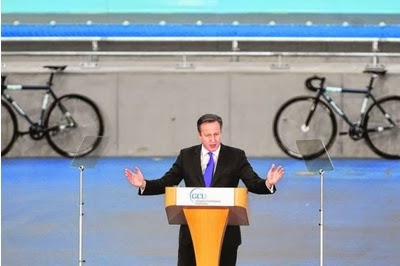 The archive link for those unable/unwilling to contribute to their online revenue stream.

Many thanks CH. Much appreciated by many I’m sure.

You might like to add Derek Bateman's blog as I don't see a link on here very enlightening to the beeb's going on.

It hardly seems like just Wednesday past that I was expressing my difficulty in opting for a YES vote due to the frightening prospect of finding the EU looming ever larger.

Then along comes Cameron, who with condescending arrogance proceeds to spout emotional red, white and blue verbal diarrhoea over the independence debate.

He has singularly failed to sway my emotions.

But now I have a new worry – if I do vote NO, I would hate to think for a single moment that people might assume that Cameron’s nonsensical verbiage in any way swayed my opinions. Nothing could be further from the truth. In fact his speech has given me a considerable nudge towards a YES.

"Don't let us put you off. You were born to wear red, white and blue."

No he wasn't. He was born to wear blue with a dozen yellow stars, the traitor.

I really struggle to see anything of value in that piece. So he doesn't like Cameron, big deal!

Throw in a few political red herrings about education, the NHS and 'bedroom tax' - all continuations of Labour policy. But then Labour is a unionist party, all Scots are natural Marxists, students of envy, masters of the handout. Come the revolution no doubt the dissenters will be 'cleansed'. Perhaps that is why Salmond is so keen on the EU, that is where the new handouts will come from.
I like the references to Quebec. Is that the way of the future? Any company than can moves out, anyone with an ounce of gumption, Francophones too, with the freedom to do so moves out!
Win the 'Yes' vote and say hello to a nasty, envy ridden midden on the fringe of the Euro-Marxist state.

Ever heard of humanity? That is where those who can help help those that are less fortunate than they are which enhances their community benefiting all.

Do you trust the media to tell the truth? Y/N will suffice.

I was anti EU for a long time as I had some trust in the MSM in having a greater balance of honesty, sadly that has been blown out of the water over the referendum coverage where known lies are prominent over the truth.

If the MSM can lie on the referendum issues then maybe they also lie over the EU issues or is cherry picking facts the winner.

What a smug, parochial little man Ian Bell really is. Typical of much of the Scottish middle class.

The best pro-independence politicians are the leaders of the three main parties at Westminster JRB.

CH, the difficulty I foresee is the balance of a social nation. Too left wing and the high earners won’t come/stay.

I do get irritated when anyone who earns over, say £40,000 is immediately referred to as ‘rich’ etc. Many people have worked and studied hard to achieve and they deserve every penny.