The Meerkat Of Badenoch And SNP Fairytales 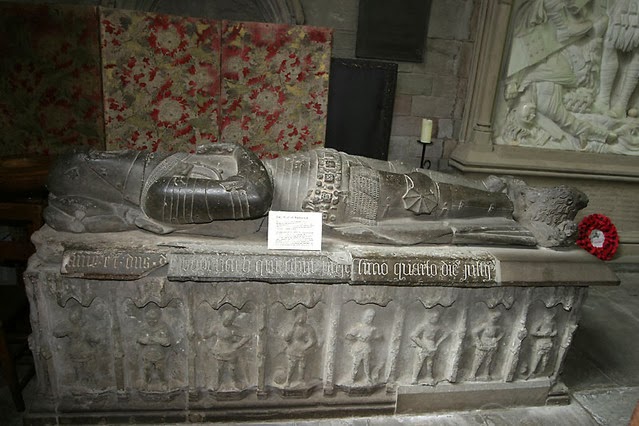 A few days ago there was delight in the independence Yes camp with the announcement that the Treasury would continue to honour debts amassed by the UK if Scotland becomes independent.

Being the cynic I am I delved a little deeper and this gesture is not as benevolent as it may seem.  The lovely Demetrius points that out.

Danny Alexander may be no wolf but he’s no pussy cat either.  He’s promoting the  conliblab anti-independence agenda.  Of course an independent Scotland would pay its fair share of the UK debt when it’s independent. It always has done - and more.

However much you believe in coincidences, but I’m always beware of a species which is portrayed in wolves’ clothing - particularly when the Wolf of Badenoch is currently part of the renovations being carried out in the ancient part of Dunkeld Cathedral.

it’s with my cynical eye I read the article about Nicola Sturgeon’s speech in Edinburgh last night.

“The EU is not in the business of throwing out its citizens, of ignoring democratic processes, of reducing co-operation and cutting the size of the EU.

The bold is mine. I’m still astonished at prominent Scottish politician voicing such nonsense.  Even pro-EU politicians are very aware that the EU lacks any form of democracy.  Its accounts haven’t been signed off for 11 years.  Any organisation or business which operates in that manner is certainly not democratic.

If the SNP think the EU will be throwing money at an independent Scotland for no return then they’ve lost the plot.  The cost will be much higher anyone ever imagined.

"The deputy SNP leader used a speech in Edinburgh to claim that if Scotland was represented as an independent nation in the EU it would have received £850 million in Common Agricultural Policy (CAP) funding, which she said would have supported an extra 2,500 jobs."

This has been an interesting week. So far we have had …

- 95 MPs sending a letter to the PM insisting on a veto on all EU legislation
- The Lords discussing an In/Out Referendum
- George Osborne warning the EU to reform or face decline
- The latest YouGov poll on May’s European elections showing the Torries lying a dismal third behind UKIP.

It has become patently obvious that all is not well with our current membership of the EU. There is now a growing groundswell for cutting all political and legal links and returning to the common trade organisation that Europe once was.

So why, Oh why, in the midst of this obvious discontent, is the SNP so willing to take us ever deeper into Europe, and allow its disproportionate influence to be imposed upon us all.

Are the SNP really willing to sell the Scottish soul for thirty Euro?

I think your all buying the negative
propaganda of the Union camp.

The Scottish government nor the SNP have never stated they will join the EU at any cost, only that there is no reason why they should be excluded from it through Scotland gaining it's independence.

It's the negativity and straw arguments spewed out by the No camp that litter the argument in confusion and doubt in order to mask the fundamental purpose of the referendum.

In essence there are so many issues to be negotiated and settled - the EU only one among many - I doubt the EU settlement will be resolved within the 18 months; but I have no doubt whatsoever that during the negotiations the EU will not regard Scotland as a pariah state.

Further, until the pros and cons of membership are known and available for assessment by the people of Scotland, a balanced decision by a further referendum is not possible. (but it should be promised)

I can only agree! I'll raise a dram of BNJ to you, family lived round the corner from the distillery.

Salmond is such a Europhile and PC-mad with it that he would sign us up to the EU at any cost (I believe).

"The fundamental purpose of the referendum" I believe is a vanity project for Salmond to claim his crown and for Scotland to no longer be ruled from Westminster - just by the EU, UN, C of E and 101 other global cabals.

There are pros to EU membership?

No, they would bleed us dry with massive green fees (maybe not to start with, to reel us in), destroy what's left of our industry with more green fairytale laws and taxes, remove even more freedoms and all the other nasty stuff we are used to.

Scotland, with 1% of the EU's population will be a minnow in a tank of sharks. "At the top table making decisions" my crinkly and ragged ****!

...and chances are that indy-pretence would be such a disaster that the masses would turn on the SNP and we would have Labour governments from now until Judgment Day.

An 'independent' Scotland in the EU would get its own commissioners - fat salaries, no elections, fat pensions - what's not to like?

No idea Joe, but they’re not kidding me or you.

I think they are JRB and I think it will have a destructive effect on the referendum result.

I disagree Crinkly. The SNP’s policy states they will join the EU and adhere to its rules and regulations. That to me is any cost.

Unfortunately I, along with many others, don’t see any party coming forward who could be strong enough vocally to prevent the current SG negotiations.

We know the pros and cons of membership. They’re available on the EU website.

Good comments Stewart. I know you’re not pro-independence but very fair assessment of the current situation.

Oh those nasty Europeans ---Imagine that, The Netherlands Denmark and France are not independent countries


We in scotland should be so lucky .

Rosa you surprise me ,not one of demetrius`s statements is true .
If I can pick them apart then you certainly can .
but it seems to suit you to let those dreadful and in most cases untrue comments pass without comment .

So whats the difference ,oh yes we wont pay for fat salaries or fat pensions for unelected politicians in the house of lords

Footdee, my remarks aren’t about European countries but the European Union. Just because the countries you mention are members of the EU doesn’t mean it’s the right things for an independent Scotland.

Footdee, my remarks aren’t about European countries but the European Union. Just because the countries you mention are members of the EU doesn’t mean it’s the right things for an independent Scotland.

There are a couple of Demetrius’s statements with which I disagree Footdee but he knows that from reading this blog. It’s a bummer trying to comment on his blog with all the security he has.

Yes I know we already pay for these unelected people but surely that doesn’t mean to say it’s right?

"Even pro-EU politicians are very aware that the EU lacks any form of democracy. Its accounts haven’t been signed off for 11 years."

The smallest community group would lose funding from its local council if it did not submit, annually, audited accounts. Yet the EU with a budget of zillions doesn't have to submit audited accounts. That is scandalous.

"Its accounts haven’t been signed off for 11 years"

I thought we were in the mid to high teens now? Regardless, it's disgraceful.

Hi Jo, good to hear from you. It is scandalous and I’ve yet to hear a politician start a serious complaint.