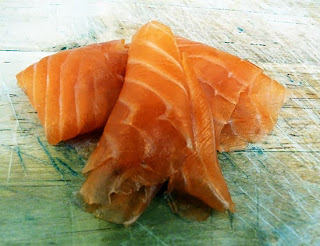 I noticed the following in Private Eye and thought Rosie’s readers may find it interesting.

As Scottish salmon producers struggle to keep up with the demands of Alex Salmond's deal to supply China with fish (Eyes passim), shoppers buying products such as Macrae's Scottish Quality-branded "Scottish Smoked Salmon" who checked the small print on the packaging recently, would have found their fish was actually farmed ... In Norway.When wildlife campaigner John Robins queried this with Tesco the supermarket told him "We are reliant on Norwegian supply to help us meet our customers' demands". When  he then asked trading standards whether the labelling was acceptable, they confirmed that, so long as the smoking takes place in Scotland, it was legal because it describes the product as "Scottish smoked salmon" and not as "smoked Scottish salmon". Very little of the fish farmed in Norway can be sold to China since a diplomatic row between these countries over the granting of the Nobel Peace Prize to Chinese dissident Liu Xiaobo.....It was reported last November that the largely Norwegian-owned farmed salmon industry in Scotland was way behind its schedule of increasing production by 60,000 tonnes by 2020, as agreed in the Scottish government's deal as preferred salmon supplier to China ( in return for two panda bears plus investment in the Grangemouth refinery)......,"The best-laid schemes of mice and men ... and a' that!


Environmental organisations, including the World  Wildlife Fund and the Aquaculture Stewardship Council, have repeatedly warned that such rapid  expansion of fish farming could make the already highly polluting business even less sustainable.
PS : Sainsbury's  was given a slap on the wrist by the Advertising Standards Authority last summer for selling salmon labelled as coming from Skye, Lewis and Uist , when it was actually from the more intensively farmed Loch Fyne.
PPS: Cumbrian fish-smoking firm Grants got into bother last year for using Chilean salmon in products it was supplying to Morrisons as Scottish.
Tweet
Posted by subrosa at 09:57

I must try and read "Scotland's Future" by the same authors, even if it is just a year's worth of Private Eye jokes....

P.S. I meant the same authors as those who made these 'promises' to the Chinese, not the authors of P.E., "Unless", as Ether Rantzen (I think) used to say, "You know different".

… therein lies a salutary lesson for us all.

And it is a lesson that not only relates to the ‘Scottish’ smoked salmon industry but to many foodstuffs that use the descriptor ‘Scottish’ to erroneously infer quality.

These foodstuffs are produced on an ever expanding industrial scale to meet the growing demands of the giant supermarkets, like Tesco, Sainsbury and Morrisons; (as mentioned in the article).

Their on-line service is fast and very efficient and should you wish a drive to their retail shop they are all located in beautiful parts of Scotland. On arrival you will be made most welcome. (I write from experience).

Equally I could say the same for meat products - forget the supermarkets - use your local butcher or farm shop.

I know Scottish fishermen and their families who have lost their livelihoods and I cannot make light of this. Boats have been destroyed and the industry cannot recover. I`m off target I know, but it reminds me of the wrong that has been done by UK Governments and the European Union.

Any fish called Scottish is a misnomer. The only fish are the people flapping about confused.

Edward Heath decided that the sacrifice of Britain's fishermen was a price worth paying for membership of the EEC. The EEC negotiators knew his desperation to get in and the Common Fisheries Policy was sprung on Britain as a late additional demand. The instructions to negotiators were "Swallow it whole and swallow it now"- albeit with a delay in execution.

I remember a young John Selwyn Gummer addressing our 1972 corn trade conference in Buxton. He lied his head off, telling us that the Commonwealth countries wanted nothing more to do with us. I knew the New Zealanders were desperate. Our firm's twenty years as their well-satisfied customers ended instantly on the stroke of midnight Dec 31 1972. We had to buy European milk powder after that - at a vastly increased price.
Gummer also told us that Britain's exports of engineering products and cars etc to Europe would boom as soon as we were inside the Common External Tariff. That was untrue. Whether it was a deliberate lie or wishful thinking, I am not entirely sure.

On Friday, 8th April 1870, according to the Fife Herald, an Alexander Salmond, out fishing near Perth, was murdered by poachers. Perhaps Salmonds and fish do not go together well.

Interesting article on salmon and freshwater fisheries in today’s Scotsman – as Alex Salmond casts the first fly to open the salmon season on the Tay.

[… but no news of Wee Eck having been murdered]

I have to agree with you in part Alice. As a frequent fish eater, I use a local fishmonger for my supplies. Last year when buying crab I happen to ask whether it had been caught on the west coast. No, I was told, it was the west of England. Told her to put it back. Same goes with the frozen prawns they sell. They’re from Taiwan and I’m not prepared to eat them knowing how they’re produced. Shame really because I thought a fishmonger such as Swankies of Arbroath would be more open about sources.

I suspect it was a deliberate lie Edward.