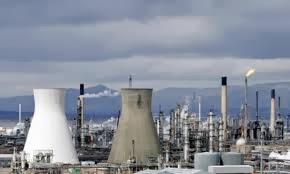 For the past couple of weeks I've observed the Grangemouth Ineos vs Unite dispute from the sidelines.  The left-wing press had a few field days painting Jim Ratcliffe - the owner of Ineos - as a villain and blackmailer while other media used less pejorative language.

During my research for this post I stumbled over this article From Iain MacWhirter and found it to be a fair assessment of the most serious Scottish industrial dispute in years.

As a sympathetic observer of the desperate events, the people I admired were the workers who saved the day by effectively sacking their local union leaders. Iain MacWhirter is correct when he says: 'Some Labour people might have been content to see the plant close, the better to damage Salmond'.  That is true.

To substantiate my remark let me tell you about a conversation I had with a fellow bridge player this week.  His usual cheery personality was subdued and when I enquired if all was well with him he immediately launched a rant about Unite. I'm paraphrasing: "Stupid union leaders with their own personal agendas. They have no interest in their members wellbeing or futures.  I'm shocked at the behaviour of the 'leverage team'. How can any responsible union invade the privacy of company directors?"  Charlie spoke more throughout my contact with him during the evening and eventually I said he must be a Tory-voting unionist.

His reply astonished me. "I was a senior Unite official for many years until I retired in 2006. During all my years with the Union I believed that respectful and courteous negotiation with management was by far the best way in which to air my members' grievances.

In the latter years of my service, I was aware a hardcore of unsuitable people had risen through the ranks and their agendas would become clear in time. The handling of the Grangemouth dispute is a serious stain on the reputation of 'my' Union and 'my' Labour party is no longer fit for purpose."

Jokingly I suggested he'll now be voting for an independent Scotland and the SNP. "Too right I will," was the reply. "I'm never been a fan of Alex Salmond, but I've watched his actions in this closely and I've been forced to accept his political skills are far above any in the Labour party."

If a retired, senior ex-Unite official is so distraught by his Union colleagues behaviour, what will be the future of Unionism in Scotland?

Maybe a trip to Germany would be helpful. German Unions have protected both German industries and their workforces whilst UK Unions continue to do the opposite. Could it be that they use Charlie’s philosophy of respect and courtesy instead of personal ambition which can lead to corrupt behaviour?

This has been a dark, dark episode in the history of trade unionism.

What has happened of late has gone far, far beyond such benevolent fundamental principals it as mutated into the very worst of political rhetoric and aggression.
The so called ‘leverage teams’ are but the red shirts, the unpleasant 'klu klux klan' wing of modern trade unionism.

The idiocy of the Them-n-us policies adopted by both employers and unions is a mythasaur capable of providing nothing but dissent.

It has no sustainable function nor place in the 21st century other than as a Trojan horse to mask the covert positions of both parties.

We have ways of making you work. More seriously when the German set up was created back in the 1950's they were mindful of the UK situation and how the activity of some TU hardliners might have lost us the war. They certainly lost us the peace and now may lose us the Union.

It was certainly widely rumoured when he took office - and quite in character - that the Labour Minister of Agriculture, Jack Cunningham (known as "Junket Jack" from his fondness for freebies), reportedly said that he was really looking forward to doing to the farmers what the Tories had done to the miners.

With attitudes and motives like that it is not surprising that industrial and economic disruption have been our lot.

Demetrius is quite right. Trade unionists, particularly communist shop stewards, led a campaign to undermine the war effort in 1940 when Hitler & Stalin were allies. There were even strikes in aircraft factories during the Battle of Britain. We often hear about fascist sympathisers from that time but never about the left which really did help Hitler by obstructing "The bosses' war" (as they called it).

Germany, of course, is doing relatively well now because it has rigged the currency system of Europe to its great advantage, as well as having a disciplined work force.

I remember Manny Shinwell saying that he had never met such unpleasant, stupid, selfish people as the coal owners - until he had to deal with the National Union of Mineworkers!

After nationalisation, they wanted no part or responsibility at all for the running and development of their industry. They just marched in and presented their demands for improvements in wages and conditions "or else" . And in the then state of the country were able to enforce their demands.

Incidentally, it is often forgotten that the pre war (largely Conservative) National government actually passed an Act to nationalise coal. The war put a stop to the detailed process of agreeing compensation etc. So it went into cold storage for the duration.

Curiously that is not the only UNITE official, retired or otherwise who has given respect and praise where it is due. Has anyone seen Len McCluskie's piece in the Daily Record today? How extraordinary.

You’re right JRB although the I see the darkness continuing.

What could be put in place to protect workers though Crinkly?

You always produce the most interesting historic facts Edward. Thank you.

I’ve seen it now, thanks to you wisnaeme. Is that the kiss of death for independence? :)

Openness, honesty, communication. aspiration, common sense, common purpose for the common weal would be a start Rosa - but perhaps under the global yoke it would be a triumph of hope over miracles.

We must never lose hope Crinkly. but also must remember it's measured in degrees. :)

You don't consider that the behaviour of Ineos - threatening to shut down the petrochemical industry in Scotland simply so they could get rid of one man - to be slightly provocative?

It was sometimes referred to as a throwback to 1970's industrial relations. The difference, it seems to me, is that it was the employer who wanted to play 'chicken' with peoples lives, not the union.

No I don’t William. From what I’ve read it was Mr McClusky who played with peoples lives.

The dispute was ongoing for 3 years so the union knew Ineos’ stance and refused to negotiate. Furthermore they then decided ‘strike mode’ was the answer.