Teach The Children To Remember 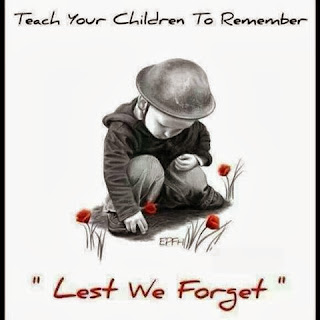 I’m slightly out of touch with what children are taught in schools these days. It used to be the 3 ‘Rs’ and a round, basic knowledge of the centuries old sciences (physics, chemistry and biology) along with some history, geography and of course the essential French was part of our language learning.

Now we have ‘life sciences’ and a multitude of other subjects which also contain the title. Seems that the word science is as overused as executive these days - if you’re not an executive then your job is regarded as inferior.

I must say I prefer the -ology suffix to the broad term science/scientist.

However, that’s not the reason for this post.  As I said, I’m out of touch with what children are taught in many areas of their education.  Are they taught the history of the hellish World Wars?  I can’t recall I was, but then war and it’s ravages, were still very prominent in the minds of each and every adult when I was in primary school.

Like any large organisation the British Legion can be criticised adversely, but they do their best to keep the memory of those who gave their lives so as we could live ours in freedom.

I wonder what they would think of the UK today.
Tweet
Posted by subrosa at 11:11

… “what gives with this red poppy thing?”

… “think its got something to do with the second world war”

Says it all really.

Equally, I was in the city earlier today. There was a time that I can clearly recall when, at the appointed hour, everything and everyone came to a standstill.
Not now, the hustle and bustle of the city goes on unabated, people seem too busy for any interruptions.

Says it all really.

We should also remind the younger generations of the Kohima Epitaph:

"When You Go Home, Tell Them Of Us And Say,
For Their Tomorrow, We Gave Our Today"

We are of similar vintage, and when I was at school, history dealt with "old stuff". Ie up to & including Victoria's reign.

From a faded memory, it was only in 5th & 6th form that a more specialist subject encompassed parts of political causes of WWI.

Perhaps the failure is not what our children are taught but that they are not taught to think.

Today's primary schoolchildren do get taught about the experience of WW2,particularly from the viewpoint of the child.

I think there has always been a 'horizon' in the past, beyond which is 'history'. WW1 and WW2 were the wrong side of the horizon for us so weren't taught.

I'm afraid the fact that 11/11 is 'forced' on us shows that the fascists won. Remembrance Sunday puts the public remembrance in a public place and time, take part or not,your choice. Forcing a second 'ceremony' on everybody, everywhere stinks of Diana-ism. That mania sunk to new depths for me was when the anniversary of London 7/7 was forced on us at work. I doubt if anyone had been involved personally and it was just a 'blip' on London's usual death toll anyway. That was also the day that my brother was killed but that doesn't count.
Leave us all to remember what we want,when we want.

I noticed in town on Monday that only a few older people stood still when the church bells rang at 11am JRB. As you say it’s not so long ago the towns came to a halt.

I’d forgotten the title of that Joe.

As far as I recall it was the same at my school Joe. It was left to parents to educate such matters. That’s in the days when parents played their part.

Are you suggesting their shouldn’t be a Remembrance Day Jim?

So sorry to hear about your brother. Natural death is one thing and I can’t imagine what his death was like for you and yours.

Subrosa: I'm suggesting that we have Remembrance Sunday which comes with a time and place like the Cenotaph or the local war memorial.
Not content with that the British Legion has conducted a campaign to make 11/11 a day of memory too along with an universal two minute silence. We are all free to take part on the Sunday and equally free not to take part if that is our choice. However the intent of 11/11 is to force remembrance on us all, like it or not.
It is often said that our war dead died for 'Freedom', well it is a funny sort of freedom that forces something on everyone.
Thank you for your thoughts. There is no preparation when someone you love is killed, no chance for last words. Ironically because of 7/7 my brother spoke to his eldest son just a few hours before he was killed as the son was in London and he called to see if his son was OK.

I taught my son how to do division and excel on exams and they told him it was totally wrong, it was not new math. No wonder they are confused.

I taught my son how to do division and excel on exams and they told him it was totally wrong, it was not new math. No wonder they are confused.

Dublinmick, I had the same problem so returned to Scotland to a place I knew did maths my way. It worked.

Ah, I see now Jim. Didn’t know the BL were involved in this 11/11 business and I agree with you there.

As I said I can’t imagine how that’s affected your brother or the family. It’s one of these situations where you tend to think ‘there but for the grace of God go i’ isn’t it.