A Dereliction Of The Military Covenant 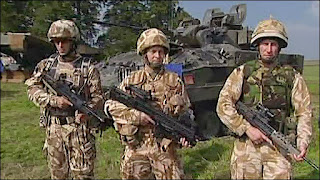 We’re all aware that when anyone joins the military they are conscious of the fact that they are risking life and limb for their country.

Also we’re aware that in recent years governments have done their best to reduce our military security - once the envy of the world - to a fighting force which would be unable to defend these islands without the help of allies.

The excuse for diminishing our military was because we can’t afford because we’re broke.  The UK’s financial situation is nothing to do with the military, but HM Forces have paid a heavy price.

Redundancies have been immense amidst rumours of the Army laying off soldiers just months or days before their official retirement dates.  These rumours are well-founded and some soldiers are being deprived of 50% of their pensions.

Few join the military for the salary because many could achieve higher salaries.  Few join for the exceptional working hours; 7 days a week on operational duty for months on end.  Many use part of their final pensions to buy themselves a home they can, for once, call their own instead of paying high rents to live in MoD accommodation allocated to their rank and family size.  The Army does offer a good career and opportunities for advancement (at times) because that too can be reliant to ‘dead mens’ shoes’.

Taking into account the years our forces have spent in unwinnable wars at the behest of power-mad politicians military pensions, in comparison with other public service pensions, are not generous but adequate.

Lord Touhig’s evidence is damning (see above link) and it’s little wonder the Coalition’s recruitment policy for reservists is 50% short of its target. Ros Altmann provides a document she presented to MPs and Peers in April this year which lays out the details simply and effectively. Losing up to £200,000 resettlement income is a major breach of trust by the government.

One hundred and thirty soldiers’ pensions are affected by this betrayal but it will also affect their families and extended families.

The armed forces are denied employment rights granted to every other public service worker.  They rely on trust and this has been betrayed.  The government must uphold the Military Covenant for all service personnel and ensure the financial promises made when they signed up, and on which they risk their lives, are honoured.

The government must put in place a fair compensation package that recognises such pension losses and compensate those long serving soldiers affected so far plus ensure such injustices do not happen again.
Tweet
Posted by subrosa at 09:19

Welcome to the wonderful world of Conservative driven finance …

This simply translates as - taking as much as one can from those least likely to make any significant fuss.

The military are by no means alone in experiencing the cruel aspects of this Tory dogma.

And, if I may be critical, you have fallen into the other trap of such right wing ‘bully boys’, that of ‘divide and conquer’ setting one hard done by sector against another.
You make more than one reference to ‘public service workers’ as if their terms and conditions allowed for an idyllic life – they do not.
Fire-fighters, who do put their lives at risk, have had their terms and conditions decimated. Nursing sisters, who hold our lives in their hands, could now earn half as much again by simply working in the nearest supermarket.

And dare I mention those no good, money grasping, reprobates – the disabled.
Of whom 600,000 (by Government figures) will loose benefit when they are switched to the jewel in Ian Duncan Smith’s crown - Personal Independence Payment (PIP)

The military are not alone.

What is currently happening in society is wrong.
But let us not set soldier against nurse or against any other worker or any other sector of society - what is happening is purely a direct result of this Government’s policy.

Oh dear! You are proselytizing for the entitlement and dependency culture that now dominates our society these days. One of the main reasons why government cannot afford to grant that which you so ardently advocate.


Our military are even braver (?more-foolhardy?) than you state Rosie.

"We’re all aware that when anyone joins the military they are conscious of the fact that they are risking life and limb for their country."

Only the Falklands & Northern Ireland campaigns involved the recapture/defence of British sovereign territory; all the rest were to massage the egos of certain Westminster politicians.

Cameron, in the meantime has been running around the world lecturing all and sundry on human rights. If you really believe in the rule of law then you believe in contract law and honouring contracts in the spirit as well as in the fine detail. This is a shameful dereliction of duty on the part of the government.

Of course you may be critical JRB, but I think you’ve missed one critical point. The military don’t have a union to ‘protect’ them. That’s perhaps why politicians think they can be used as footballs.

I’ve yet to meet a firefighter, police person or nurse in an NHS hospital who has so few ‘terms and conditions’ as anyone in the military. HM Forces aren’t even protected by the HRA.

Of course, we now have the case of Marine A. What difference is it between Marine A’s behaviour and the heads of NHS Trusts which have murdered many yet not one head has rolled without a handsome payoff?

I disagree Antisthenes but then you would know that.

Dependency culture in the military? I doubt if you’ve experienced military life or you would realise there is no dependency culture. If I’m wrong I’m sure you will correct me.

To sack anyone days before long term service comes to an end is appalling. In any other public service the unions would step in.

Well said Joe and I wouldn’t recommend the military to anyone these days.

But our military, according to the heid bummers in Westminster, can’t be protected by the HRA Demetrius.

Subrosa. I did my bit for Queen and country many decades ago reaching the dizzy heights of corporal and also being made redundant for my pains as it was also a time when the military was being downsized. I and others who suffered the same fate expected and got no favours except our redundancy pay. The world is a changed place now and everybody feels entitled to suck off the taxpayers teat. Everybody now has a cause and plenty of bleeding heart busybodies to champion it. It cannot be sustained and in the end we will all be very much poorer for it.

Antisthenes, the modern army is very different to the one you remember. Many recruited in the last couple of decades are highly educated people who would have had no problem acquiring a job in Civvie Street where they could have commanded a much higher salary and conditions. They chose not to do so with the understanding that they would receive a decent pension at the end of their service and that pension would compensate, in part, for them to put down a deposit on their own home.

Some have bought their own homes before they leave the service, but back in your day no soldier was allowed to purchase a property without the approval of their senior officer and believe me, that was nigh impossible to get.

As I said to JRB, I have never read or heard about anyone in the other public services being made redundant within days or weeks of retirement.

What sort of democracy do we have, if it reneges or fiddles with its commitments to both those that pay towards it and those who defend it.

Ultimately the morale of a nation depends on the morality of its democracy.

I can’t argue with that Crinkly.