Where Are the Greenies? 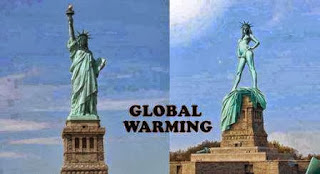 Hopefully the image has made you chuckle but this is serious.

Is it a sake of 'out of sight out of mind' with the planet savers?  Reading the response of the academics makes a mockery of the whole subject.  No doubt these same academics are happy to fly anywhere in the world to preach their sermons about how the world is set to explode due to global warming. I very much doubt if they'll be paying for their carbon footprints - who with any sense would part with money for such an obvious scam?

I've tried to find if there is a similar account of the North Sea or other European seas, but found nothing.

Where are the protests from the Greenies?

What we are watching is the slow painful death of our seas and all that live in them – not from global warming, but from the excesses of mans selfish financial interests and thoughtless greed.

This frightening story does not just apply to the far flung waters of Australia and the pacific. It is happening here and now in the waters of Scotland.

And yes, here in Western Europe, much of the blame, if not all, can be laid at the feet of the EU.
For years they (the EU) have failed to produce a workable, sustainable fair and balanced fisheries policy.
They have failed to curb the excesses of international factory fishing, bowing instead to political and financial interests, all to the detriment of responsible national fishing industries.

As for commercial shipping, similar imposed political restraints make it viable for them to take the chance on breaking the rules by flushing tanks and dumping waste at sea.

On a global scale the tsunami and its aftermath were a disaster. The effect the floating detritus will have on the ocean should raise fear across the globe.
But Japan pretty well washed her hands of it by the time it reached international waters. America and her neighbours don’t want to know about what is happening (yet).

Surely it is past time for all countries in the Pacific basin to come together in mutual interests to deal with this massive problem.
It would appear that politics and financial constraints prevent this from happening.

We don’t need global warming to kill the planet – man is managing to do that in so many other ways.

Interesting. Quite why some of the information about the North Pacific situation has not made the main media is a puzzle. But then they are rarely interested in coming disasters, only those that happen and then only the personal interest stories.

One suspects Demetrious that nobody has yet discovered how to make large amounts of money out of the Pacific situation. As soon as they do you will hear plenty about it.

JRB your comment deserves a post of its own. I will do that next week if you don't mind. Been occupied elsewhere recently so forgive the lack of posts.

Is that called crisis management Demetrius? When, if ever, will we have long term thinking politicians. I can name one or two but I'd be called a radical right-winger.

Hmm interesting point Woodsy and I don't think you're far away from the truth.