A guest post from Joe Public. Thank you so much Joe. 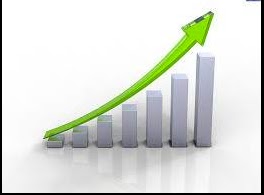 The “green Party”  - unaware of the costs we would all have to pay for of its polices. [That’s ‘green’ as in 'inexperienced or naive’.]

On 13th September I emailed the Green Party asking "How much our current energy prices are inflated, to absorb the costs of subsidies to wind- and solar- subsidy-farms?”

After three reminders for even an acknowledgement, I finally received an answer on 23rd Oct.

The Greens' response was "About £4” (per year, per household), obtained from the headline of a year-old trade paper ‘Greenwise’ they provided as their source.

As their source was simply a trade magazine reporting a press release from a trade association [Renewable Energy Association (REA)], those of a sceptical nature would rightly be suspicious.

But that trade magazine report also included an addendum to the article which clearly stated "This story was changed at 14.37 on Wednesday October 23 2012 to clarify that renewables added £22 to the average household bill this year already. “

Now it gets interesting.

In fairness to the Greens, at the time of their response to me, I expect they were unaware of the latest press release from REA dated 23rd October 2013 which stated "Renewables policy makes up only 3% of average bills overall and only a third of the Government’s ‘green levies’….”

At March 2013, the ‘average' household energy bill is given as £1,267 on p78 of DECC’s "Estimated impacts of energy and climate change policies on energy prices and bills”

Now it gets really interesting.

In order to assess the commercial impact of subsidies, I specifically asked "How much our current energy prices are inflated to absorb the costs of subsidies”. The format of the answer provided (irrespective of its accuracy) was …………….. disingenuous. It may or may not factually correct, it is the preferred format of politicians & certain vested interests, but it doesn’t answer the question.

The use of a statement "…. added an extra £xx to household energy bills.” is only part of the picture, because it deliberately understates the true impact of 'green taxes’.

The “House of Commons Energy and Climate Change Committee "Energy Prices, Profits and Poverty Fifth Report of Session 2013–14” (HoC 5th report) states on p59 that approximately two-thirds of energy costs fall on non-domestic consumers. However, the majority of their costs are then likely to be passed through to domestic consumers through higher prices for services and products. [I’ve included an image below, of part of the relevant para.]

Consequently every household pays both the direct extra cost of the energy, plus the extra cost of those same price rises on all UK goods and services bought in. A £100 increase in ‘household’ bill translates to about £160 increase in household costs, because you & I have to pay to heat and light and power all the factories, shops, pubs, offices, warehouses etc that provide the goods & services we buy in.

For Rosie’s Scottish-based readers, it is even worse. For comfort, Scotland & the UK primarily need heating (as opposed to a warm country which needs cooling for comfort). Data in the form of ‘Degree Days’ is used to compare both annual and regional temperatures. From this source I’ve compared 2012 20-year average Degree-Days for the ‘Midlands’ to provide guide to ‘average’ UK conditions, with NE Scotland to represent folk north of the border. You may not be surprised to have it confirmed you need about* 2568/2214 = +16% more heat than the rest of us.

* There are many variables, and I’ll wager I’ve simplistically underestimated the effect of the northern climate - the greatest being the Degree-Day data is ‘only’ 15.5°C, whilst the CIBSE guide for comfort in living rooms is 21°C. Therefore the northern heating season is much longer than for southern folk.

On 22nd October, Scottish Power was fined £8.5m because its sales agents misled competitors’ customers into switching supplier by (not necessarily deliberately) underestimating
the cost of power from them. I don’t know the relative percentages, but I’d be surprised if their underestimate was greater than 10%.

Political parties have a duty to present facts about their policies which impinge on everyone’s standard-of-living, with a reasonable degree of accuracy.

[I’m human, and collating data which is sometimes deliberately presented in obtuse forms may lead to some error. I’d welcome any reasonable correction or clarification of my method & rationale. ]

And now, what of the future?

The good news is that some politicians have woken up to the fact that the people who elect them are ‘price sensitive’. Some need reminding about the Office of National Statistics report that in winter 2011/12 (December – March) 22,800 people in England alone died from the effects of cold weather – this is a provisional figure, but is similar to figures for previous years. [Sorry, but I haven’t got the figures for Scotland - but they must be proportionately greater because it’s colder.]

The bad news is that HoC 5th report p59 (image below) also warns that whilst "DECC analysis suggests that energy and climate change policies make up approximately 9% (around £112) of the average annual dual fuel bill. However this is set to rise sharply in future years, with costs falling largely on the wholesale electricity price. DECC estimates that its policies will add (up) to 33% to the average electricity price paid by UK households in 2020 and 41% in 2030.” (my bold & underlining) 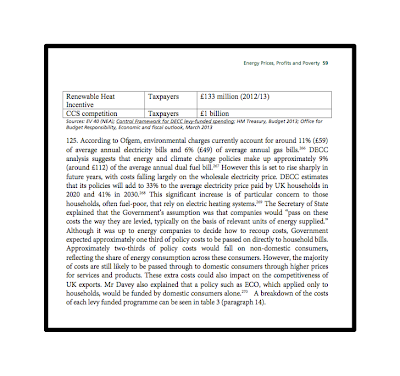 Editor's Note: Apologies if the fonts vary on this post for some readers.  Unfortunately I can't fix it.
Tweet
Posted by subrosa at 09:05

Thanks for posting Joe; you have by diligent example confirmed what I long suspected. . .

That, regardless of the hue, be it green, blue, red or yellow all political parties manipulate and massage the facts and figures in order that they may achieve their political ambitions.

As for seasonal winter deaths, and here you quote the horrific numbers for England. ( The equally frightening figures for Scotland can be found at - http://www.gro-scotland.gov.uk/statistics/theme/vital-events/deaths/winter-mortality/index.html).
I have my own conspiracy theory for these statistics…
- That government, whilst not actually encouraging the demise of their citizens, they are not unduly concerned by the numbers which represent an acceptable mortality rate.
- By far the vast majority of these deaths are amongst the elderly, whose number grow year on year.
- As the elderly now live for longer the are an ever growing drain on the nations welfare, pensions, health and care costs. That represents monies that could be used elsewhere.
- Mr Cameron by signing up for a new nuclear plant has accepted that energy bills will double. Perhaps he has equally accepted that the winter mortality figures will double.

The demise of a few OAPs merely keeps costs in check and is after all, just basic Malthusian economics.

It alarms me that in the event of a manufacturer's product deemed to have a "Safety Defect" - i.e. "a feature of design or construction liable to cause significant risk of personal injury or death", it is forced to mend or recall the offending item.

Yet a government may continue to promote an (energy) policy that is irrefutably proven to result in thousands of unnecessary extra deaths.

As far as I'm aware the green subsidy is not a charge placed on the energy companies to encourage them to invest in renewables, but a stealth tax which indirectly subsidises the energy providers carbon emission charges before being handed on to the consumer and raked in by the Treasury.

I'm amused by the terminology - provisional deaths figures - what constitutes a 'provisional death' and what time scale or proof is required before it becomes confirmed? - typical bureaucratic merde-speak.

It all boils down to obfuscation for the benefit of corporate welfare.

The subsidies are the extra monies us consumers are forced to pay to the Subsidy-Farm owners for the privilege of being allowed to buy their product. [Even though occasionally we don't actually need their product at a particular moment in time.]

The supreme irony being that the greenie-lefties demand we use renewables, often at the exclusion of more-economical forms of energy, yet ALL Subsidy-Farms are owned by Capitalists.

Probably, the 'provisional deaths figures' are the guesses submitted before cause-of-death has been determined.

I suspect the deliberate obfuscation is to try to prevent the hoi polloi from realising where their taxes disappear to.

the recent uSwitch.com says electricity prices will be "unaffordable" by 2015. The report estimates that the average home electricity bill will be £2000 by 2016! Energy consultants Ulyx predict that as a consequence of more green measures energy bills will rise by a further 58 percent over the next few years.Last winter 28000 died because they could not afford to heat their homes. In todays Independent Charlie Cooper says that as many as 200 could die each day if we have a bad winter. Is this genocide and is the UK coalition government legally responsible?

"Is this genocide and is the UK coalition government legally responsible?"

Labour's Ed Miliband announced his Climate Change Act in 2008, aiming to reduce
greenhouse gases for the year 2050 to at least 80% lower than the 1990 baseline,

Cameron's opposition Conservative Party and the Clegg's Liberal Democrats supported the concept of the bill.

The Green Party of England and Wales wanted an even greater reduction.

ONLY only five MPs voted against. Those five were Christopher Chope, Philip Davies, Peter Lilley, Andrew Tyrie, and Ann Widdecombe.

Joe, thank you for such a well researched article and giving me the pleasure of posting it.

As you know I'm had an interest in this subject for years now and I'm frightened about what the future may hold for many who are unable to meet the excessive demands for their utilities.

Don't expect the truth from the watermelons.

When their new leader, Natalie Bennett, was interviewed on BBC radio just after her appointment, she stated that the "green economy" now comprised 11% of GDP.

Intrigued by this, I emailed the Green Party for sources, references and citations for this figure.

I haven't even had an acknowledgement. The Greens are the enemy of humanity. Treat them with the contempt that this deserves.

"I haven't even had an acknowledgement"

Neither had I, until my 3rd reminder.

That BBC interview with Natalie was the one where she stated "…………...If we go for the 'dash for gas'... we're going for a really high-cost, uncertain energy future."

In my original e-mail, I had also asked the Greens to explain how exploiting an additional resource, can possibly add, to uncertainty.

I suspect she's had a logic-bypass.