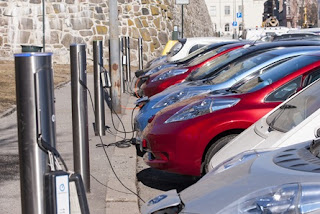 Once the leaves start to fall so start the political circuses generally referred to as the 'conference season'.

This week the LibDems are doing a grand job of tearing their coalition partners and colleagues apart and from the few speeches I've managed to read to their conclusions, it would appear most are fighting something - either to keep their job or to grab someone else's.

I've attended two political party conferences in my life.  Both were many years ago now and in the days when SNP members did debate matters. Nowadays, partially due to the wonder of television, party conferences are tightly staged managed.

Was it at an SNP conference that the party agreed to this policy? The document is entitled 'Switched On Scotland' and it reveals the Scottish Government's dream of making Scotland's cities free from the 'damaging effects of petrol and diesel fumes' by 2050 with an 'almost complete decarbonisation of the road transport sector'.

In the words of the friend who brought this to my attention: "Are the SNP hell bent on destroying themselves?"

Seeing images of Keith Brown and Gordon McGregor (the Energy and Environmental Director of Scottish Power) in the Foreword is surely enough to turn most Scots into cynics. For those like myself who are of a cynical nature, it may take some strength to read the propaganda, but it's all there: 'improve local air quality', 'public heath and wellbeing', 'energise Scotland's economy through opportunities for flourishing green technology industries".

I don't want an electric car and I've yet to meet anyone who does. The Scottish Government is now investing £14m ridding itself of all its petrol and diesel vehicles which will be replaced by electric models.

In the past few weeks I've had more than my fair share of 'energy efficiency' companies telephoning to tell me I'm eligible for one of the 'new' grants.  I can have a ground air system or an air to air system but not one would discuss the actual cost to me. As I said to one young woman who was grimly determined to finish her sales spiel, "There's never a free lunch."  Sadly she didn't understand my meaning.

The job creation target in the renewable sector was blasted by the Auditor General last week and I can't see it improving much in the coming years because we will continue to import equipment and expertise.

Local councils complain about their city centres dying, but if council car parks are to be turned into 'charging ports' then fossil fuel drivers will go elsewhere.

Earlier in this post I mentioned the word 'dream'. Hopefully this policy stays in the SNP's dreamland because if it doesn't it will cause them more than a few nightmares; one being a rapid loss of supporters. This is a vanity project too far and should be switched off immediately.

Regardless of the merits or not of the electric car where is the power to come from?

If the petrol/diesel now used in cars was diverted to power stations outside of town then to a first approximation nothing has changed, except where the 'pollution' goes.

"Ah but it will all come from renewables" they say. Hardly, we will struggle to replace the current need for coal, gas and nuclear generation for non-transport uses without adding in electric cars too. Apart from solar these 'green' technologies are all pre-18th century methods with a white coat of paint.

"We'll all do it online". I have seen a convincing argument that the power demands of the internet will swamp our ability to supply the power. The man/woman at the keyboard doesn't see it but all those copies of videos on YouTube come at a price. If you live in a city keep an eye out for those green (or grey) cabinets at the roadside. A lot of them are gaining a mate next door or across the road maybe. The old cabinets just joined up your phone line to the big cables to the exchange, the new ones connect optical fibre to the exchange. If and when you go for higher speed broadband they will link your connection from the old cabinet to the new one. How does one tell the difference between the old and new cabinets? Well the new ones hum and they have vents. They have vents because they get hot. More energy for Windy Miller and the clowns at Trumpton to supply!

Your friend is right to be concerned, for indeed it is patently obvious that the SNP are ‘hell bent on destroying themselves’.

Sadly our MSPs have succumbed to that disease so prevalent amongst all politicians – chronic myopia.
Their field of vision has become limited to the environs of the Holyrood bubble, or on a clear day, the Edinburgh/Glasgow corridor.
What Brown and McGregor consider to be desirable in Morningside is totally impracticable in the rural Highlands and many other areas of Scotland.

But what of the claims they make regarding the benefits.
The only factual benefit would be a reduction in exhaust emissions, which may produce a nominal improvement in air quality. All else they claim is pure speculation.

But what of the facts they don’t tell us.
Electronic vehicles are far more expensive to produce, mainly due to the additional circuitry and gearing required.
Due to the electronics and batteries required, the manufacture of such vehicles uses more of the earth’s finite, scarce and valuable resources, especially metals and rare elements.
And the batteries, once they have reached the end of their useful life they are second only to nuclear waste in the toxic waste league.

Electronic vehicles may be the politicians dream – but it may turn out to be Scotland’s nightmare.

Henry Ford packed ten horsepower into a space hardly fit for a dog.

It's fuel had to be paid for and reserves carried due to the lack of supply points.

The horse was far more efficient!

Sky Arts ran a programme about the 1924 trip that Friese Greene did to film his car ride from Lands End to John O'Groats. What a lovely world it was. There were hardly any cars around at all except in certain major cities. An added benefit was that there was free organic fertiliser to be found everywhere for the taking.

Electric cars will not be a universal
possibility until we have a proper
storage battery for the electricity
required. So far as I am aware,all electricity storage devices use a chemical conversion stage to work.
This reverses to produce electricity.
No one has so far found a way to store electrons in a bottle, as in pour them in, pour them out! Without conversion. And that is the basic sticking point for electric cars.

Those in favour of electric cars never discuss the "greenness" of the actual batteries nor battery life. Batteries contain a lot of nasty poisonous heavy metals and at the end of their life have to be disposed of, presumably by re-cycling, which in itself costs money. They also weigh quite a lot (compared with a tank of fuel) and this is extra weight which in itself requires more energy to move around. Apart from specialist vehicles, like milk floats, the only efficient electric vehicle was the trolley-bus which was both quiet and had good acceleration compared with the trams it replaced. I see from yesterday's paper that Edinburgh will soon have a tramway, perhaps one day they will modernise it and get trolley-buses!

Back in the mid Sixties, I dealt with a Lincolnshire corn merchant who still kept a horse and cart for short range town deliveries. Not only was it splendid advertising but it was more economical than a petrol/diesel vehicle. There was little depreciation and low "fuel" cost.

But it had to come to an end when the old carter retired. Younger men did not have the skill and did not want to drive something so old fashioned.

With regard to the power for these electric cars, I think Mr. Salmond has a cunning plan. He will sell very expensive "renewable" electricity South of the Border when the wind blows free and buy cheap, conventional electricity from there when it doesn't. Of course, this all depends on holding the line on the increasingly discredited theory of man-made global warming which ain't happening.
I see that the new Australian government has just abolished the Climate Change Ministry there.

Agenda 21 - Brave New Scotland is a trailbazer for the NWO yet again :(

For any driver restricted to just the Edinburgh/Glasgow central belt - 'leccy cars would have limitations.

For drivers north of there, they must be the most impractical form of transport imaginable.

Oh, and the car batteries cost about £70 every month, to rent.

Only civil servants would propose such a foolhardy scheme, because they use other peoples' money to finance them. Potential private purchasers will have realised just how much such vehicles' Residual Value plummets after 3-4 years.

Excellent points Jim. Thanks very much.

Of course I never touched upon the cost of this to industry JRB. That wasn't part of the propaganda was it?

There are quite a few who would agree with you Crinkly!

Missed that one Demetrius, but I've taken a note of it as I'm sure it will be repeated. Thanks.

Thanks for that vital information Apogee.

It's not discussed because these vehicles are not 'green' EP. Surely that's the reason?

Don't get me started on the Edinburgh trams. I could bore you forever.

Edward, you mention the two words climate change. One of the UK's biggest scams in recent years.

Jings Joe, rent the batteries? Never even thought of that. Hope people become aware of all these realities. Thanks for pointing it out.

At a very high pop rating in every poll, I hardly think the SNP are "distroying themselves". It is a rare party that has that standing in the middle of a second term. My guess is they are doing a lot of things right.

Speaking of switched on ,I am surprised that you haven't switched on to Wings over Scotland an excellent informative site to add to your list of excellence.

I should have said they're destroying their chances next year Jeanne. This is a prime example. People don't have the money to buy these expensive cars which are purely city runabouts. For us in the country they're no good whatsoever.

Dorothy, I do read WoS. Thought it was in my blog roll. Off to check.