A Short Guide To The Middle East 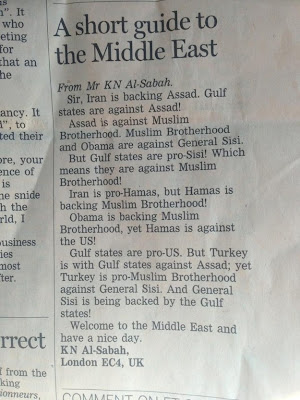 This was sent to me in an email and I thought it worth sharing with you.

It's quite amazing how Obama and Kerry have shifted their stance in the past 48 hours isn't it?  Perhaps lessons from Iraq and Afghanistan have been learned if only a little.
Tweet
Posted by subrosa at 09:03

The situation in Syria is even more-ironic than Mr K N Al-Sabah describes:

"Al Qaeda-linked groups operating alongside Syria’s rebels are growing stronger, analysts told Congress on Tuesday, countering recent claims by the Obama administration and some senior lawmakers that extremists are playing only a marginal role in the civil war.

So if Obama intervenes against Assad, he'll be allied with Al Qaeda.

Then, when Assad gets toppled, the Sunni/Shiite internicine conflict will really explode.

Western intervention simply means that once again, our lads will get attacked by both sides. The ungrateful sods.

The short guide to the present situation is quite informative and useful. Of course, historically, and going back some time, it becomes rather more complicated. So in both the UK and the USA our governments of ignorant amateurs have no chance of even a basic grasp of reality.

An even shorter solution.

Stop buying their oil and gas until they sort themselves out.

... erm ... exactly ... just what’s needed ... a clear concise and succinct analysis of all the issues surrounding the current crisis in Syria.

Mr Crinkly - it's the Americans who want to bar the Russians from access to the various pipelines and tie them into another ME bear trap. Little wonder the Russians see this and are making strong moves to prevent the US from undermining the current Syrian leadership of Assad who provides a link for the Russians to the old and the new oil reserves just discovered off the Syrian and Lebanese coastal waters. Hence remarkable Russian and US naval activity around Cyprus.
As usual - follow the money/energy resources. Just wait until we start fighting over food production and supply.

The West is now reaping what it has sewn over the last century and more with impunity.

On a brighter note.

Sorry, I'm not getting notification of comments on some posts.

Since I posted this of course Putin has changed the course of the argument. Is Obama relieved?

Thank you all for your comments. Thank you too CH for the compliment. :)