In Days Gone By 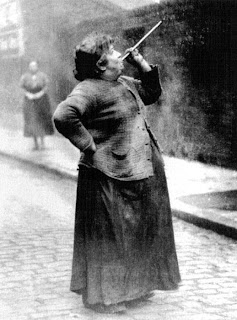 Around the early 1900s Mary Smith, of Brenton Street, East London, was a legendary character.

She reportedly earned six pence a week equipped with her trusty peashooter.

Can you guess her job?

Possibly a pigeon scarer, or, waker-upper (shooting peas at a window)??

I think you have got it right although I never saw this method of waking folks up before.

In the Northern mill towns there were "knocker uppers" who used a sort of stiff besom on the end of a pole which they rattled against the windows of those who had paid for their services.

This is of course a photographic example of the well known tonal instrument commonly nicknamed a ‘pea shooter’.

It is a small trumpet or bugle like instrument that produces notes in the extreme high register. [Ref: http://en.wikipedia.org/wiki/Pea_shooter]
Therein lies the clue to its use. Sounding the ‘pea shooter’ produces a note of such high frequency that it drives bats from the roofs and gables of domestic dwelling houses, and forces them to fly off to find sanctuary in the nearest church.

Ms Smith is a bat removerer.


If perchance she should in fact be a ‘knocker upper’ - then it begs the question – who knocks up the knocker upper?

She woke up market traders in Limehouse fields.

My Nan used to tell me about 'em (Eastender)

Most of you are spot on. I'll post a link about her and the photograph tomorrow.

She shot peas at windows to wake people up because there were no alarm clocks and, seemingly, no babies in those days.

You're right Andy, although I do think there were babies. They were just seen and not heard in those days. :)