It's Nothing To Do With Money 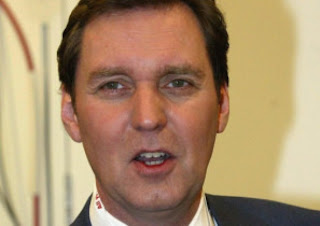 You may recognise this man but I doubt if you know what he's doing these days.

In case you don't know I'll put you out of your misery - or perhaps intensify it.

He's the former Labour minister Alan Milburn and he now chairman of the Social Mobility and Child Poverty Commission.  This is a set-up which monitors the government. I thought we paid for the House of Lords to do that.

Anyway, Mr Milburn was in Glasgow yesterday giving a speech to Springburn Academy in Glasgow. He said Scotland's universities must 'redouble their efforts on widening access'. Another quote is 'there is a long way to go before higher education was representative of wider society'.

According to Mr Milburn:

“Today, the most advantaged 20 per cent of young people are still seven times more likely to attend university as the 40 per cent most disadvantaged.

Why do politicians always blame universities?  If I remember correctly politicians were fundamental is destroying a solid provision of further education colleges which offered a wide range of subjects.  Now all that's available for young people are full-time courses, unless they are fortunate enough to be on a recognised apprenticeship.

Not all young people are capable of studying full-time or even have the desire to do so.  For some further education just means a continuation of their school days and they want to leave these days far behind.

Of course youngsters from more financially sound families will have easier 'access' to a university. The greatest cost is accommodation and food and if parents can't afford to help then the young person's choice of university is very limited. I know a couple of now 30-somethings who still feel guilty about having complained about having to live with their parents while they studied at a local university. They now realise the sacrifices their parents made by having them live there for another 4 years without contributing to the household income.

So is it the fault of universities that those from less well off backgrounds are not taking up places?  No.  As far as I'm aware most universities offer bursaries to those with ability.  It's up to schools to ensure that their able pupils have the necessary information.

What about those who don't want to attend full-time courses?

We should reintroduce vocational colleges which offer part-time study. Too often we hear employers complaining about the basic standards of literacy and numeracy in school leavers today, so vocational colleges could provide tuition in the basic subjects but associated with a subject which is of interest to the young person.

Unfortunately, in the past 20 years, we have developed a 'degree' culture and this further divides society. Most of the young people I know say their degree subject is of little or no use in their work, but think the fact they had a degree got them their job.

I'm a great supporter of further education - in fact I think it should last a lifetime - but we have to stop accusing those who don't attend university as being inferior to those who do.  That's where the problem lies as it has done since I was born (and long before too).

In Scotland university tuition fees are paid for by the taxpayer and this should ensure any person who has the ability to go on to university does so. If we built quality vocational colleges which offered practical courses in most areas of engineering, building, specific sciences etc., then we may just be able to retain skills which are rapidly disappearing.

The biggest challenge of all is to gain the interest of the young person and instil a sense of self-discipline and self-belief into them. Too many leave school without these and that's why they feel unable/unwilling to go on to further education. It's nothing to do with money.

I wonder if Mr Milburn understands his own quote? Doesn't it mean something like a small part of the few are better off than a significant part of the many? So what's new? Not much point being 'advantaged' if you don't use it.

I would be more worried that the home 'disadvantage' isn't being overcome at the primary school stage, but even then home support will tell. The alternative is a race to the bottom.

I'm sure there are more appropriate ways to do further education rather than degrees for all. As you suggest short practical courses would be better for some and they could be a gateway to degree courses for the few that could benefit.

Social mobility requires a desire to 'aspire', (and that is being destroyed by popular culture via TV etc. "it's cool to be a slag!"), and the confidence to fit in with a new 'set' and move away from one's roots. Not everyone has that in them and the universities aren't equipped to pull it out. Indeed universities are and always have been 'take it or leave it' places, a student gets 'lectured' not 'taught', there is no personal care.

At the heart of the problem are governments who 'invest' in self serving ideologies and not the people they supposedly serve.

Hope is the missing ingredient. It springs eternal but is diluted then destroyed when it trickles into the rivers of corruption.

The problem with universities is as follows

1. Too many of them are crap, and would be better of remaining the CFEs they were.

We had a very good system post-war, which West Germany used as a blueprint for their highly functional and excellent system (still). We dismantled this system, and would seem now to be producing generations of kids who can barely tie up their own shoe laces.

R5 this morning was inviting calls re GCSEs. Teachers very cross with Gove for wanting kids to work in lessons. That really won't do. Teachers cross that free schools and academies give parents more choice in schooling - for heaven's sake, doesn't everyone know that teachers know best what is best for YOUR child?

Go Gove - and destroy the NUT and the hideous hard Left Blower who runs it.

I agree mostly with your post and would go a little further.

I have never noticed before but there does seem to be a massive discriminatory divide building up.

In my local paper no day seems to go by without our local student population pouring scorn upon our "chav" community.

I know that it is unfashionable to say so, but I believe that our old system of grammar schools and b-pass technical colleges offered a better path into better jobs.

But, of course, there were then plenty of apprenticeships available then.

By coincidence I found myself reading the text of this speech this morning. I found the language used and the phrasing quite chilling...

I came across it after I wrote the post too Sheila. Exactly how I felt.

Yes we have Jo and my opinion is the same. No child lives in poverty in this country, it's irresponsible carers/parents who make a child impoverished.