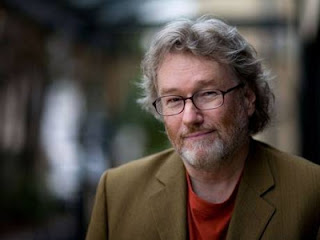 It's some years ago now since I had the pleasure of being in the audience for 'An Evening With Iain Banks'.

On impulse a friend and myself decided to visit the Edinburgh Book Festival and having spent the day absorbing the atmosphere, listening to readings and discovering authors, we were having tea in a local cafe, when a woman approached us and asked if we would like her tickets for the Iain Banks event. (It wasn't hard for her to identify book lovers because we had our Edinburgh Book Festival carrier bags and were viewing our purchases at the time). The woman had to return home because of an urgent problem with her mother and refused to accept any recompense.

We were aware the event had been booked out for months so jumped at the chance to hear a 'famous' author, although neither of us has much interest in the science-fiction genre associated with Mr Banks.

It was a memorable evening. Iain Banks came across as a modest, deeply intelligent man with a superb sense of humour. At the end of the evening both my friend and myself were so inspired, we vowed to read all his novels and my particular favourites are his 'Culture' series, although The Crow Road comes a close second.

It was only a couple of months ago he announced he was suffering from terminal cancer and didn't expect to 'last more than a year'. That hellish disease has now claimed the life of another - long before his allotted three score years and ten. He leaves behind a collection of literary works which will be read and enjoyed for many generations to come. A worthy legacy.

Ian Banks was a wonderful, funny man and a truly great author. Even taken at such an early age, he left behind an amazing legacy. But it was too soon...

I'll second both the eulogies.

Sad, but perhaps for the better, that his prognosis should be so shortened.

It was too son Jeanne. Do hope you're keeping well.

Yes Crinkly, the pain some suffer endlessly is horrendous.

You've hit the nail on the head with your points Jim. Problem is, are we too late to reverse the present system/culture?

Indeed, hope is part of self-discipline and self esteem Crinkly and you're right. Once it dies it's seldom it returns.

Can't disagree Elby, but of course it's all part of social engineering.

Missed that on R5 this morning. I think Gove is on the right road and hope he sticks with it.

I don't see that problem here in a very rural area Solo Player, but I'm aware of it being far more pronounced these days.

It may be unfashionable but it's the truth.

Apprenticeships do happen but they've been played around with so much. City and Guilds were removed as one of the top vocational qualifications and these NVQ introduced - to make every student feel they're achievers. Most of us only achieve through hard work but these NVQ even give marks for attendance. Ridiculous.