A Return To The Groat? 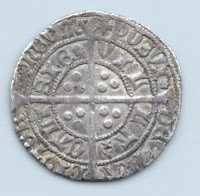 There was an interesting article in the Scottish Review yesterday - "Scotland needs to escape from the chains of sterling".

As I have little knowledge of monetary systems, I wonder if the writer's suggestion would be feasible in an independent Scotland.

However he does sum up the current situation neatly:

The financial crisis however is not moving on, indeed is getting worse. The US dollar has lost most of its post-war credibility, the euro experiment is an all-round disaster and the parlous state of sterling is obscured by the labyrinth of smoke and mirrors which is the City of London.
Tweet
Posted by subrosa at 09:35

Regardless of what nomenclature we use for the stuff or whether it be produced by the Banks or the parliaments of Westminster or Holyrood – all I know for certain is that - I have nowhere near enough of the stuff.

There is no reason why Scotland should not have its own currency, except for the Scottish cringe.
If it is beneficial, when the time comes, to join a currency union with sterling, euro, dollar, whatever, then so be it.
But it is typical imperialist scare-mongering to claim we do not have the choice.
The whole point of independence is to stand on out own feet.

Scotland could introduce its own currency. Of course it could.

The majority of people, though, would, I suspect, continue to trade in pounds like Latin Americans with dollars.

God save us from Scottish Nationalism.

"There is no reason why Scotland should not have its own currency ........

If it is beneficial, when the time comes, to join a currency union with sterling, euro, dollar, whatever, then so be it."

Only I doubt it will be the Scots who decide the beneficial timing, simply because what is 'beneficial' to one party, is by definition, 'detrimental' to the other.

There is no reason that Scotland couldn't have it's own currency as mentioned.

We could also have our currency based on the "greenbacks system promoted by President Lincoln and Hitler but best not to mention that. The government would issue currency based on the assets of the country with strong controls overseen by a sovereign people. (Fantasy can be fun and there is always an outside chance that it might actually happen).

Only a few countries in the world, Syria being one and Libya used to be another (any link there do you think?), do not have a central bank provided by the Rothchilds.

Is Wee Eck courageous enough to go down that route?

The real question is what is the face value of the paper backed up with?
Gold and Oil seem good starters.What is the value of the paper itself? Nil.Lot of countries are quietly buying gold.And a lot of second hand shops are quietly buying gold jewelry.
But can we "sell" a Scottish currency, do we have something to sell that no one else has, something that people will want to buy and will be prepared to obtain Scottish currency to pay for it.How many Scottish"whatevers" to the dollar/rouble/drachma/franc, what would be the exchange rate.
But would the EUSSR allow us to have our own currency? No, as loyal foot soldiers for the EUSSR we would be forced the use the Euro. Would we not?

Interesting article. One Tuesday 28 May last in "Money Matters Find The Bawbee" I linked to an LSE article which was very thorough written by a Scot. It is quite simple, full Independence cannot be had if a state uses a foreign currency instead of its own. But having your own currency in turn means some real monetary, fiscal and financial discipline that we have not had for some time. That will often be less than popular. The pound means London and The City, the Euro Brussels and Frankfurt, the dollar Wall Street. It means hard choices.

To be independent, Scotland must have its own currency.

And, like Switzerland, it must stay out of NATO and the European Union.

My problem too JRB and it's rapidly diminishing.

Switzerland manages quite well with the Schilling William. :)

I doubt it TT. He's too interested in seats at 'top tables' sadly.

Good points Apogee. Of course the EU would baulk so it's a non- starter I suppose.

I read that post of yours Demetrius and agreed. Our politicians these days prefer soft choices unfortunately.

As tedioustantrums alluded to, the global cabal wouldn't allow any other system. And Salmond, being the ultimate globalist puppet, would obey his instructions. That's why the Islamic countries are being reined in one by one, because they had their own non-Rothschild central banks.

Gaddafi was most dangerous of all, planning to issue gold dinars and hoped to spread the idea throughout Africa and the Middle East, thus imperilling the dollar and making money a tangible asset again.

Hi Stewart, I agree Salmond doesn't have the courage to step out of line and there's nobody else around.

I know about Libya's denomination but there was another middle eastern country the same. Can't remember which one. Terrible memory these days.

At least you can spell my name correctly, S/R. Some people I've known all my life still spell it 'Stuart'.

Demetrius is correct. Its perfectly feasible for a small nation to have its own independent currency (ie one that has no link, formal or informal, to a larger one) but doing so requires fiscal discipline, and maintaining it long term, in both good and bad times. Fiscal disciple and long term planning are two things that are noticeably missing in most politicians, whose horizons rarely extend beyond the next election. Hence why they prefer to farm out such decisions to bodies outside their control, in order to be able to have plausible deniability when 'hard choices' have to be made. Politicians bang on about 'hard choices' ad nauseam, but never seem to actually make any.

That's because my best school friend was named Stewart and he always used to get annoyed with the Stuart spelling. I'm careful. :)

Excellent contribution Sobers and you're right, they never seem to make the 'hard' choices - or learn the proverbial lessons either.

"There is no reason that Scotland couldn't have it's own currency"

Unless, of course, Scotland wants to join the EU, in which case it is obliged to use the Euro.

But leaving that aside, any currency would do as long as it were specie-based and not subject to the whims and debasements of politicians and their banker chums.

Sadly, that will never happen, so we may as well stay as we are.

I suppose we will WY. There's no enthusiasm from any politicians to change. Disappointing.