School - A Hundred Years Ago 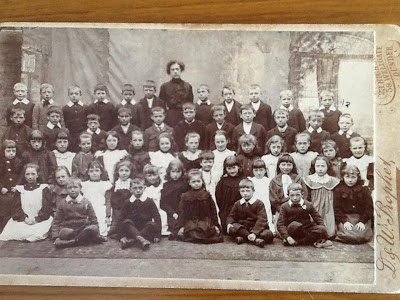 This caught my eye on Facebook as it's a photograph of Hawkhill School, Dundee around 1908.

Fifty three children and one teacher; each child looking their best.

The Hawkhill wasn't a wealthy part of Dundee so money would have been very short in most families, but you can somehow sense the pride in each serious wee face.

These were the days when people thought education was a privilege.
Tweet
Posted by subrosa at 09:02

One teacher, and probably several canes. My great uncles and aunts could have been in a photo like that, they went to school in the pre-WW1 era. And they came away from it with beautiful copperplate handwriting, the ability to mental arithmetic like lightening, to read anything, and knowledge of the world around them, and the history of the country they were growing up in. And the mental self discipline that set them up to deal with life's ups and downs.

Shame the tens of thousands of extra teachers these days can't say the same about all their pupils.

My daughter has returned from teaching in Africa. An 18 year old in charge of 90-100 pupils of mixed ages. No moving up to the next class until the child had achieved the required standard. And all pupils in uniform, no nonsense about the parents unable to afford it even though many earn less than $2 per day.

Education is valued when it affects your and your child's future. Current UK attitudes amongst some are another victim of state handouts.

They say the camera never lies – but does it always tell the truth?

How many of these wee faces were all dressed up in their Sunday best just to get their photo taken, then it was back to auld claes and bauchles for the rest of the week?

How many of these wee faces went home to a square meal on the table or was it just bread and dripping as usual?

How many of these wee faces will still be at school next term, or will they be off to the jute mill to earn a few pennies to keep the family going.

How many of these wee faces will still be at school next term, or in those pre-NHS days will some have succumbed to diphtheria, whooping cough, measles or any of the other fatal childhood illnesses?

My grandmother went to a "National School" in a poor area of Liverpool in about 1870, leaving at the age of 12. When she left, she could read and write and her mental arithmetic in adding up money (including farthings) was brilliant. Her writing and command of our language was superior to many adults today, but as far as I know she had no further formal education, anything else was self taught.
But there was a difference in those days, the parents all pushed their children to learn, it was the only chance they had of getting out of the squalor of the slums and there were no benefits if you were out of work.

Sobers! Do you actually know where Dundee is? In Scotland the tawse was the barbaric and completely ineffective form of punishment used in schools, not the cane. I was regularly belted when I was at school in Perth in the 60's and 70's, a lot of good that did! We actually had a bit of a belting league table. I'm really glad that your great uncles and aunts got a good education, it's a shame you didn't learn to spell though. "Mental arithmetic like lightening", really? So their mental arithmetic got less heavy? I always try to live by the rule that if you don't know what you're talking about it's probably best to just shut the f*&k up!

What you also have to bear in mind is that this photo comes from a time when bairns were belted for speaking our native languages of Scots and Gaelic, so maybe things have improved, don't you think?

My word! As Hurree Singh of Greyfriars fame might have said "The mostly vicarious victimhood emphasis among your correspondents is terrific!"

I'm third from the right, back row.

English Pensioners grandmother could well have encountered mine and members of the family. As for personal memories, the English Elementary School that I first attended never used the cane or belts. The teachers were equipped with police officer's truncheons, which they needed when often dealing with parents. Happy days.

But we were all in our "Sunday best", and if you even THOUGHT of playing in the sand pit "Thorr will send a bloody great thundebolt and GET you for that!" (Yes! My family were...."strange".)

Bathgate accadamy. (for example) They had a "Coal mine", built into the celler.

And the discipline was RIGID.

Then came the "68ers". Oh! They must be allowed to "express" themselves, they can NOT be "disciplined", they must not be forced into a trade.... etc etc.

Then came "Get on your bike".

The link between Work ethic, discipline, family was broken.

The very REASON for generations of tradition and family was away.

(DO not talk to me about "Incomers"!)

Sorry, That is not quite complete. I am in the middle of a thought process. And I have just sparked something off.

@pictishbeastie: you may well have been regularly beaten with a tawse, the effect being rather the same as a cane I suspect, and it may or may not have improved your behaviour. But I'll guarantee that you getting beaten made many other pupils think twice about misbehaving. That was the case in the schools I attended in the 70s and 80s - CP was regularly applied to the same old culprits, but the majority behaved themselves. I for one did my utmost to avoid it - if I had known I couldn't be beaten, my behaviour would certainly have been much worse. So I have a great deal of personal experience of CP, and am perfectly well entitled to voice my opinion on it, thank you very much.

Sobers, thank you. Much appreciated.

I thought that's where our money went DoB - into education plus other things. That's a little similar to how it was here man years ago.

I think my comments were ambiguous JRB. These children's parents had obviously been told about the photograph and regardless of finances they ensure their children looked their best.

Knowing the Hawkhill in the 50s I would say quite a few.

Yes they may have gone onto the mills but I suspect many lads joined the army and never came back.

I was told, many years ago now, that teachers could start with classes of 70+ which reduced over the terms. I wonder if this photograph is an end of year one.

My own grandmother left school around that age too EP and she was also well educated. The reading material in her house never ceased to amaze me. Her love was books.

She was a shrewd business woman - completely self taught - who cooked for others for a living. Possibly like a high class one person catering company nowadays.

Pictishbeastie, calm doon man. Not everyone knows the intricacies of the old Scottish education system.

Oh, by the way, sometime in the 50s belting girls was stopped.

Personally I think the belt was a great deterrent. Nowadays expulsion is supposed to be a deterrent. I know which would frighten me more.

Crinkly, the chap who posted the picture on Facebook mentioned the teacher was his wife's aunt. A commenter gave the name of the girl right in the centre and also mentioned she was a well educated and delightful old lady. Nice memories.

When discipline left the classroom FT. The left-wingers said children were being taught by fear or some such havers.

"Allow them free thinking" was another quote I remember.

Are our children better educated and more rounded than those schooled 100 years ago? Perhaps not.

Indeed you are entitled to voice your opinion Sobers and most welcome here too.

We also had a home register Sobers - a kind of school diary. Teachers wrote what they felt was necessary in it and each morning it had to be produced signed by a parent. Another reasonably effective disciplining tool - until we were older and discovered the art of forgery. :)