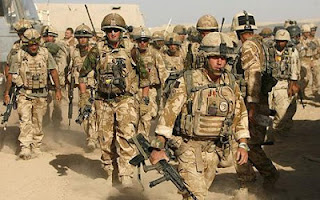 A couple of friends emailed me this morning asking my opinion of the Telegraph's article 'Army launches recruitment drive for 10,000 new young soldiers ahead of redundancies'. (I don't subscribe to the Telegraph but was able to access it on my iPad, so if you have a tablet you can read it by downloading the Telegraph app).

One of my friends was outraged at what he considered was an insult to those soldiers who would soon be leaving the Army; some involuntarily.

Next month there will be another round of 5,000 redundancies and starting today the MoD will appeal, in a television campaign, for fresh applicants, aimed at the 16 - 24 age group.

Maybe this is why the MoD is starting a recruitment drive.

Critics argue that the Army is losing valuable expertise as it sheds trained soldiers in favour of young recruits, many of whom will be starting on just over £14,000 a year.  I concur, because much of the skill training within HM Forces is expensive but, on the positive side, many skilled soldiers who have been made redundant will be employable in civilian life, even in the current employment market. Sadly, also there will be a good percentage who will be suffering war-weariness and all the health problems associated with numerous deployments in recent years.

The MoD defended its position by stating that around 11,000 leave the Army naturally every year so it has to constantly recruit.

Ministers are trying to reduce the size of the Army from 102,000 to 82,000 as part of deep cuts to the defence budget.  It was initially proposed that numbers would be bolstered by more reservists from the Territorial Army, but it seems that employers aren't at all happy at the prospect of losing an employee for months rather than weeks.  Also, as in any organisation, it's so much cheaper to have youngsters rather than older, more qualified and experienced personnel. Thankfully there are those who recognise their plight and make strenuous efforts to help.

The future of our Army is now becoming evident. A basically trained young force with depleted senior ranks. In a few year's time our Army will be but a shell of what it has been in my lifetime.

What does concern me is that army recruiting has now been outsourced to the private company Capita yet there is no indication that the MoD has made its recruitment department redundant as yet.

Who would have thought that the recruitment of our military was profit-making?
Tweet
Posted by subrosa at 09:11

As someone who has gone through muster rolls of the Napoleonic Wars and knows a little about WW1 and WW2, what is apparent is the rate of turnover at those times. We have been in Afghanisatan a long while now and it is likely that many men have been in the field for much longer periods than their forebears. But we have only a small army now with not much, if any spare manpower capacity. The implications of this are not fully understood. There is a disaster in waiting if they get it wrong.

The army is not alone in experiencing imposed redundancies.

Both the RAF and the Navy have been similarly hit.

This very day sees HMS Ark Royal signed off and heading for a Turkish scrap yard.
Surely the loss of the Ark has been the biggest military blunder in modern history.
For not only did we write off our only carrier but we also wrote off all the specialised trades and skills that were necessary to man a carrier at sea.

Perhaps so many have had enough and want to leave the MoD has no option but try and recruit replacements?

As it is, I'm way beyond expecting any sense to emanate from Westminster on any subject that requires competence.

Could the reason be that the Armed Forces now need experienced X-Box & PlayStation manipulators, rather than tough, aggressive individuals for actual fighting?

There's a very good chance they will get it wrong Demetrius.

I agree JRB, but the Navy and RAF are not having a national recruitment drive.

Indeed, such a sad day for the Navy. I was looking around to see if any blogger had mentioned it but as yet haven't found anything.

More trades and skills lost. Is it any wonder young people can't find work when those who could teach them such skills are on the scrap heap.

Quite a few have had enough Crinkly but of course leaving isn't easy if they've signed on for a particular number of years.

People plan for X years then find they're redundant before their contract expires. Lots of difficulties with that, not least if they've been living in MoD accommodation, they need to find a home urgently.

Mind you, lots of our IT development started with military engineers. Their ideas get pirated and someone in Civvie Street makes the fortune.