Farewell To 'The Mighty' 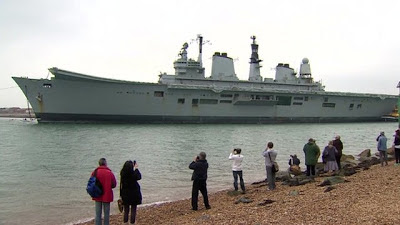 Yesterday hundreds of people turned out to wave goodbye to the Royal Navy's flagship HMS Ark Royal on her last voyage before being broken up for scrap.

The aircraft carrier, which was formally decommissioned in 2011, was towed out of Portsmouth Harbour watched by a large crowd of silent well-wishers and she sailed by.  She is being towed to Turkey where she will be broken up by a ship recycling company.

A flotilla of small boats sailed with her as she was pulled by tug boats from the harbour.

The 22,000 ton Ark Royal - the fifth Royal Navy ship to bear the name - was launched in 1981 and was known affectionately by her crew as The Mighty Ark.

The decision to scrap the Ark Royal has left the UK without a fully functioning aircraft carrier for nearly ten years until the next generation of carriers come into service.

Retiring her five years earlier than planned was a controversial decision and one which is still disagreeable to many.  As part of a £2.9m deal the Ark Royal will go to the same yard as her sister ship Invincible.

Her last journey would have been a very sad and poignant sight for many naval personnel.

One ex-sailor said he couldn't understand why she hasn't been kept and used as a tourist attraction.  That may have worked well because Britannia, docked at Leith, is now a very profitable business.  However, the powers-that-be decided to rid the UK of a perfectly serviceable ship in order to save money, yet they're happy to spend millions subsidising windmills.

My thanks to JRB for this post. He gave me the motivation.
Tweet
Posted by subrosa at 09:05

An opportunity for the "Vital Spark" to be promoted to Flagship??

[And Para Handy to become Admiral??]

SR – Thanks for posting.

To repeat what I said yesterday the loss of the Ark has been a major strategic blunder.

For an island nation to so deplete her naval capability is nothing short of criminal insanity.
Whilst I fully accept that any ship or weapons system has a finite life, it is sheer lunacy to write off the only carrier you have whilst waiting ten years plus for a replacement.

Let us all prey that the decision to scrap the Ark does not come back to haunt us anytime in the next decade (and that the likes of Argentina has not been keeping abreast of the news.)

@Joe – Thanks – can’t stop giggling at the thought of it.
https://www.youtube.com/watch?v=8_GwWPeJ0PE

Ships don't last forever and 32 years is great age for a hull.

What about HMS Illustrious? She is the last of the "through deck cruisers", so-called because Dennis Healey, (self-described as the best defence minister ever), said we would never need another aircraft carrier. We have a long history of making mistakes and using weasel words, (cruiser v carrier) so that politicians don't tell lies.
We lost our carriers as such when the Sea Harrier was withdrawn, again an old bit of kit.
Perhaps the UK's 'defence problem' is that we don't spend enough or that we spend too much. It reminds me of wee boys that had their Airfix bomber and fighter and helicopter, rather than a squadron of just one type. I don't understand how the Americans, with just five times the population have more classes of carrier than we ever had in a class.
As to the future, well the idea that two ships can provide full cover is a joke and now we are told this might be just one, (booking for wars now in 2015-2017, 2019-2021 etc.!).
If using 'Ark' as an attraction is such a good idea where are the Scots entrepreneurs? Oh, I forgot, we are all so intrinsically 'left-wing' that we have to wait for the politburo to do it for us.

I should thank you because it should have occurred to me.

It is insanity and I don't quite believe it's been done just to save money. There are darker forces at work here don't you think?

I'll accept that Jim, but she still had plenty left in her and to dismantle her when we've at least 10 years to wait for another is sheer stupidity. Someone's making money out of it and it's certainly not the Treasury.

Can't disagree with your last paragraph. Do people really want to live in a country similar to the old east Germany? Because that seems to be the road we're travelling.