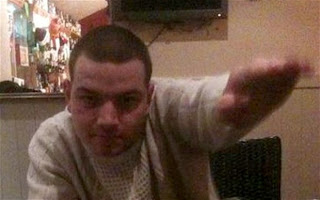 England goes to the polls today to elect local councillors.

Surely that shouldn't interest people in Scotland?  Of course it should.  The last couple of weeks have shown the levels political parties will go to smear their competition. The plan has worked beautifully - for UKIP.

UKIP has been on the receiving end of Tory dirty tricks and Nigel Farage has coped reasonably well with his critics. He's revelled in the publicity the Tory party has created.  The above image goes to show just how far the Tory party will stoop to smear a UKIP candidate.  Surely everyone knows that a Nazi salute is given with the right hand?  To suggest this is anything other than a man in a pub stretching over to get his girlfriend's phone is ludicrous.

The SNP have had years of being oppressed by the other main parties but have survived due to tenacity and policies that the public generally accept. They're used to dirty tricks and realise people now treat mudslingers with the disdain they deserve.

UKIP's main policy is for the UK to leave the EU.  They're the only party in the UK which stands on that ticket.  I will be interested to see the outcome of today's elections because, although some may vote UKIP in general protest, the majority will vote for them because they believe the EU damages the UK and the rest of Europe.
Tweet
Posted by subrosa at 09:35

Also, not wishing to sound flippant, everyone knows a proper Nazi salute means you need to put a finger from your other hand under your nose.

The Tories have tried to hard with this and ended up shooting themselves in the foot.

I don't hold UKIP anywhere near the BNP in any estimation or comparison; but the BBC tried the same thing with Griffin on QT and succeeded only in making it look like a school playground bullying.

Couldn’t possibly comment lest I be accused of unfair traducement or adding to poor Mr Farage's embarrassment.

He he JRB. Unusual for you to be sitting on the fence. :)

Pa_broon, now that did make me laugh!

UKIP seem to be providing policies which many want, but we'll see in the results tonight.

UKIP is the political equivalent of pic-n-mix in the sweet shop.

People are dipping in mainly because they're sick and tired of the lack of quality and taste of their usual choices.

Weather wise it's not a bad day down here. I reckon most people will opt for a touch of sunburn.

Crinkly & Amp - a bit like the Lib Dems were before they went into coalition, perhaps?

With regard to accusations of racism against UKIP -
I am independent of party now -
It was just the same in the Seventies when I was chairman of Derby branch. The fact that my colleague, the chairman of Leicester branch, was married to a black lady made not the slightest difference.

Kenneth Clarke has a nerve. He invited
the fascist leader Sir Oswald Mosley onto the platform of the Cambridge Conservatives - not once but twice!

A young Michael Howard resigned from the Cambridge Conservatives over this. Clarke had a Jew-free association for a while - but very pro European.

Whilst the EU is definitely pushing mass migration to break up "homogenous" nations (as testified by Peter Sutherland to the HoL committee last Summer), they will also play the race card when it suits them.

I was in Malta in the run up to their EU referendum, privileged to support the CNI (cross party Campaign for National Independence) - massively out-financed by the EU but putting up a tremendous fight.

One of the most effective leaflets of the campaign was a scruffy, black and white, illicit A4 flyer with no publisher's address. It was circulated in huge quantities just before the poll and put the question "ARE YOU EUROPEAN OR AFRICAN?"

The Maltese voted narrowly for the EU and were consequently inundated with illegal immigrants from Africa, using Malta as the door to get into the promised land of Europe and social security - just as CNI had warned!