Another Joker At No 10 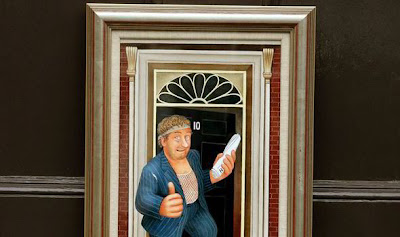 I've be a fan of Beryl Cook's paintings for many years and have a reasonable collection of her postcards.

For years I've also been a Gregor Fisher fan, starting with his appearances in Naked Video.

Put the two together and what do you get?  A painting by Beryl Cook depicting Gregor Fisher's alter ego.

It's reported he commissioned the painting in 1992 after his wife sent a letter to the famous artists asking her to paint him.  It has never been displayed in public until now.

Now the painting is to be auctioned in Edinburgh on 17 April, along with a selection of postcards and letters from Cook to Fisher, and it's expected to reach between £6,000 to £8,000.

It's thought he has decided to auction it off as he and his actress wife, Vicki Burton, are planning to move to France.  There will be many who will miss the Govan philosopher.

If I had £8,000 to spare I'd be in the Lyon and Turnbull saleroom next Wednesday.  Somehow I think it will go beyond the guide price don't you?
Tweet
Posted by subrosa at 09:46

Loved his character Rab C Nesbit, and, the postings from the Blogger who adopted his image as his avatar.

Did you know that the Earl of Home is of Nesbitt descent from the late 18th Century, along with the Earl of Antrim and sundry connected peers? Also one of these married the Queen Mum's elder brother, John? There really should be a group of the Scottish aristocracy bidding for another family portrait to grace the walls of their drawing rooms or galleries.

Me too Joe. I think he must have been promoted in Morrisons.

No I didn't know that Demetrius, but I do now and will add it to my 'Scots History' box. Many thanks.