An Idea For Budding Entrepreneurs 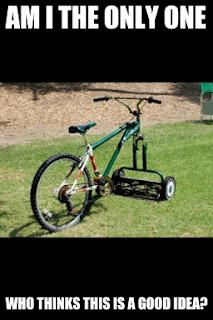 With a few adjustments, such as a safety bar to avoid the feet contacting the blades, I think this would be the answer for all those males who spend hundreds of pounds buying ride on mowers.  The only problem I foresee is that it wouldn't be suitable for a small lawn.

Insufficient drive from the single rear wheel, I fear, but:
You'd look sweet
Upon the seat
.....

I think a "roller" [made of something light] would be a better rear wheel :)

Don’t tell me you’ve gone all green and eco-friendly in not wishing to use a petrol or ride-on mower.

Your ‘significant other’ would be knackered if you were to get him one of these contraptions.

Device might have a bit more ‘male’ appeal if the mower were strapped to a 750cc Kawasaki, but then it might be a little less green.

When it comes to ride-on lawnmowers, the fact it cuts grass is a secondary consideration for the average male.

On the other hand the uni-mower (technically it can't be called a bicycle anymore ;-) looks like a real winner, I have no doubt Duncan Bannatyne would be in as opposed to oot.

(I'd put the mower on the back wheel and drive the front wheel, no idea how that would work with steering right enough, I'd leave that to my R&D department though. ;-)

Anything that keeps bikes off the pavements and roads can't be bad.

My 4 year old grandson had a similar idea. Having seen, and had a ride on, his uncle's ride-on mover with the rotary cutter underneath, he is demanding that his father fits a similar cutter under his pedal car so that he can cut the lawn at home!

Surely that could be improved upon Hamish?

Now there's an idea dognamed blue. That would be perfect.

Oh no JRB, I was thinking more in a fitness capacity.

He would definitely baulk at something like this. Even one driven by electricity is used with reluctance.

I rather like cutting grass and remember having a Qualcast rotary mower just like the one in the image.

Ah another good idea. Well have to dig up an entrepreneur. :)

There you are EP, our entrepreneur. :) Has to be cheap though, that's the most important factor.

I live on a slope. Not much good to me.

Last time I rode a bike it managed up slopes Woodsy. :)