Could UKIP Be A Threat To Scottish Independence? 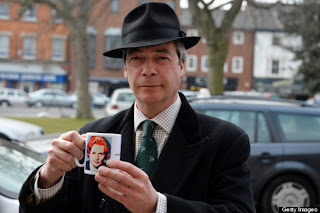 On my Facebook page I have several requests a week to become 'friends' with various UKIP members.  I don't know these people from Adam or Eve so I often decline, but on occasion I say yes out of curiosity.

UKIP are certainly receiving a good press at present - possibly due to their success at the Eastleigh by-election, but will it continue and what's it to do with Scottish politics?

Whether its popularity has peaked or not is debatable, but it's certainly attracting 'forgotten' voters.  The Tories should be worried and I suspect there's quite a bit of anxiety behind the doors of party HQ.  Labour should be concerned too because a good chunk of their voters want out of the EU and may be prepared to support a party which agrees with them.

But are UKIP a threat to the Yes campaign for an independent Scotland?  Could Nigel Farage be the catalyst who swings the vote towards No?

The answer is yes to both questions.  UKIP has never been too interested in Scotland and vice versa, but if it was to put up a few candidates in selected areas, particularly cities such as Edinburgh and Aberdeen where there is still a strong Tory voting base, then those who want to leave the EU will have somewhere to place their cross. That would boost the No campaign because, of course, UKIP believes in a united kingdom.

More and more I hear people say we should leave the EU yet every party in mainstream Scottish politics supports Brussels.  The SNP have shown in recent months that they're determined to be part of the European Union even though it's been suggested that they would have to join the Euro.
Tweet
Posted by subrosa at 09:10

Would the independence referendum not be a seperate issue SR ?
I vote SNP at the moment but would probably vote for an anti EU independent MSP post independence.

UKIP was basically only ever a single issue party, however Mr Farage now wants the party to adopt a traditional “Conservative” standpoint on all other issues, in order to make itself electable - not so much ‘true blue’ but more a shade of ‘true purple’.

Much as though UKIP’s anti-European stance may appeal to many Scots, myself included, its underlying Tory values will not find much support.

The Yes/No vote will be won or lost solely by the SNP/Yes Campaign on whether they put the honest and detailed facts before the people, or, try instead to push the vote through on a tide of political dogma and emotion.

As the major political issue now seems to which of them all is actually the least deranged rather than the most able or wise then someone who is accused of being deranged might be the one nearest to sanity. I think it is time for a quiet lie down.

I have wondered for a while now, about this slavish, have to be in the
EUSSR come what may, of both the Westminster and Scottish Governments.
SNP are seemingly unable to give an answer to WHY we MUST be in the EUSSR, anyone reading the papers from Europe must be wondering why we are not running as far and fast as is possible from the disaster that is Europe. Germany has financial problems, Italy, France, Spain and Portugal have BIG financial problems,and some commentators/pundits are suggesting
Germany may be best to leave!
In comparison UK isn't doing too bad. The Euro seems to be the root of the problems, but most politicians in the euro zone are religiously attached to it, so that wont change soon,so why the wish to be attached to this slow motion train wreck. Seems Germany is now doing more trade with the rest of the world than with the EU.
And I wonder if you take the transhipping of our trade through Rotterdam out of the equation, that we do more trade with the rest of the world than with Europe.
Or is there something else that they dare not tell us about,have they with typical political incompetence got us into something we CANNOT escape from. (they think).Most people I know want out of the EU, probably more so than the UK. If Cameron Started the GET OUT process tomorrow, he would probably win the next two elections,and you can forget a referendum up here. The answer to too many questions is either ones we do not like, or no answers are forthcoming, or the question is ignored.
So what is the reason, why the reluctance to answer the Questions,
do they not have any answers, or is the real answer we should never joined in the first place!

There is a real problem for Scottish voters, what do you do if you favour independence but don't have Salmond's view of Scotland within the EU? Perhaps Scots should look at Southern Ireland and consider whether, having fought for independence, they are really any better off than they would have been as part of a modern UK with devolved powers.
Personally I would prefer the US type federal system, with each part of the UK having identical powers and Westminster just being responsible for defense and international issues, etc, but definitely outside the EU.
As a UKIP supporter, I'm pleased that it is gaining ground in Scotland. It is no longer a one-issue party and is taking the traditional Tory ground abandoned by Cameron. Like you, I await with interest the results of the English Council elections.

UKIP may cloud the water a little but it wont muddy it.

I'm not in favour of the EU partly because of it's dictaks and as a consequence its democratic deficits which leads on to my main reason which is - it is far too open to control by the high priests in their inner temples of market fundamentalism.

The already have all the wherewithal to stop this idiotic crises tomorrow. They simply want to make sure they own all the grease and the cogs before they do.

I did a post on whether UKIP would pick up votes up here, the conclusion I came to is that it would be unlikeley unledd they tweked their core message. Pointing out, say, that the decrease in the quality of ferries could be a direct consequence of EU directives (Ferry services have to be put out to competitive tender) might act as a dog whistle for us on the left of centre.

As for whether UKIP can influence the referendum, no but Europe and how the SNP have handled that issue i think has already decided the referendum in favour of the status quo.

Not really Monty because, if UKIP broke through here, I think more people would be interested in breaking with the EU than the UK. At present that is.

Oh yes, there's hardly a week goes by without the SNP declaring how wonderful the EU is.

Quite a few Tory voters who have recently voted SNP may prefer UKIP JRB. Much depends on their attitudes towards the EU and independence.

I agree Demetrius. Don't want to read any more propaganda at present.

That's my predicament EP, however I disagree with you about the Irish. Know plenty people over there and not one would return to bring under London rule.

Depends how many candidates they put up here Crinkly and also how well they continue to do nationally perhaps?

Good points Allan which shows if UKIP want to be serious here they have homework to do.