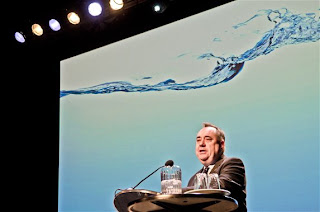 Less than a year go Alex Salmond was hailing the introduction of the Scotland-Norway interconnector which would link hydro power from Norway with wind energy from Scotland.

The project received £553,000 in a grant from the EU last March and the Scottish European Green Energy Centre also contributed a grant of about £40,000 to support early survey work.

The project company was NorthConnect which is owned by five partners in Norway, the UK and Sweden. The five partners are Agder Energi, E-CO, Lyse, Scottish and Southern Energy and Vattenfall AB.

On the 5th of this month it was reported that Scottish and Southern Energy (SSE) had pulled out of the consortium offering the reason of a need to focus on its core markets of GB and Ireland, along with the lack of short-term clarity on the regulatory regime.  Then it was said that the remaining partners were fully committed to developing the interconnector.

Now, a fortnight later, it has been announced Vattenfall AB have also subsequently withdrawn.

The chairman of the project, Steven Vass, now believes it is possible the project could be cancelled. Norway's government want to put their state controlled grid operator Statnett in charge of all Norwegian interconnector projects.

The reason the project could very possibly be cancelled is because Statnett has no interest in NorthConnect and therefore may prioritise projects in which it does have a stake - including its North Sea Network (NSN) joint venture with National Grid south of the border in England.  NSN proposes to build a line between Northumberland and Western Norway, which would potentially allow the rest of the UK to dominate green energy exporting in the event that Scotland voted for independence.

The National Grid says England and Wales could meet their renewable and carbon emissions targets without any contribution from Scotland.

Where does this leave Alex Salmond?  The erection of wind farms is causing more and more unrest within communities; so much so that civil servants are attempting to gag protestors.

Nearer home Angus Council have employed specialists to assess windfarm bids.  They have secured £75,000 of government funding which officials say should help speed up the determination process.  There has been nearly a five-fold increase in planning bids over just a few years in the county and the first large scale windfarm is now very visible on the Strathmore valley skyline, south of Glamis.

How environmentalists think the devastation of the countryside is beneficial in any way never ceases to astound.

Now that the NorthConnect project seems a non-starter, will the Scottish government start to reduce the vast numbers of windfarms being erected?  If England and Wales will be self-sufficient,  surely there is no reason to have more wind turbines than necessary for Scotland's use?
Tweet
Posted by subrosa at 09:34

Where does this leave Alex Salmond?

I would imagine – in a very uncomfortable place.
His energy policies which he has stridently adhered to are now coming apart at the seams.
The same policies have come in for much scientific and technical criticism and many associated firms are now pulling out of projects and pulling out of Scotland.
Equally public support for such alternative energy schemes is rapidly falling even to the point where it is turning to open opposition and hostility.

Here in the Highlands once globally renown for its tranquillity and magnificent scenery has had that reputation wantonly desecrated by the cancerous spread of the iniquitous, invidious and ubiquitous wind turbines

One day soon all those in opposition to such schemes will have the chance to vote. So perhaps Mr Salmond and the SNP should be a little more circumspect in their blinkered pursuit of such schemes.

So, your question on where all this leaves Alex Salmond is difficult to answer for it raises more questions than offer answers -

Has Alex Salmond passed his ‘sell by’ date?
Certainly he has passed his ‘best before’ date, and I’m now beginning to wonder could he be approaching his ‘do not use after’ date?

If proof is needed for the nation to take back control of its utilities, this is an explicit example.

One way or another the nation contributes to these surveys and as a result lose out to the whims of the conglomerates.

Make no mistake, they will want Scotland's oil, gas and generated energy. All they're doing now is developing strategies in order to maintain their control of the market and under the Westminster paradigm they're quite comfortable with that.

That apart, please no more land wind turbines, Scotland's scenery is its heritage.

Off-shore, and the development of tide and wave energy a massive yes. Scrap the eyesores of the Denny pylons and combine a land-line with the A9 upgrade in such a way that makes it an ice free road.

"One way or another the nation contributes to these surveys and as a result lose out to the whims of the conglomerates."

The alternative opinion is that if the "conglomerates" cannot justify the massive investment, then the projects are unlikely to be economic.

Ironic really, when you consider that the 'whims' of conglomerates are likely to be far less than the money-grabbing Taxation whims of whichever politician is in charge of the National Budget.

There may be a market south o' the border that might occasionally want to buy some surplus wind power.

Joe - the real irony is when the conglomerates blackmail nations to subsidise the costs of their businesses.

So is the problem more to do with utilities generation never being profitable?

That would seem to be the case since every form of generation has required subsidy either before, during or after the fact.

I'd be really interested in reading something factual on all this, especially in terms of wind farms.

As for Alex Salmond and where this leaves him, its a moot question, nobody has a clue about this Atlantic connector or its ramifications except wind farm anoraks. As for Westminster nobbling the deal and putting its own plan into action, well, we've seen Westminster-based plans come a cropper too.

I'd agree Salmond is passed his best before date JRB, but if he goes there are plenty more of his ilk standing in the wings. The hierarchy of the SNP all believe in wind being the saviour of us all.

Good points Crinkly. Some will say the utility companies were in a poor state before privatisation, but I remember when I had to call the gas board (before it was privatised), someone came within an hour. It was a local person who knew the area well. Now someone comes from Stirling area - and can take several hours to arrive.

Excellent suggestion about the A9 and Denny pylons too.

Joe, Crinkly's already given you my response but more eloquently.

Well I gave you the link about the interconnector pa_broon. Seemed to be that it will be cancelled and the press release was a warning.

Of course energy has always been subsidised but not at the added expense of destroying our wonderful countryside which generates a great deal through tourism.

The only advantage of wind is that it is free power. All the rest of the system costs exactly the same as a fossil fuel set up. No, not quite,the cost of cabling and controlling a widely dispersed system can be greater,and the output averages out at approx, 30% of the claimed.And you need backup capacity for when the wind don't blow. Oh dear, its starting to be costlier than fossil fuels and for why are we doing this? Seemingly
to reduce the amount of CO2, which is a plant food.If CO2 drops below about 250PPM, plants start to die.
Currently the level is about 390PPM.We would survive happily at 2000PPM. CO2 in the past has reached 7000PPM.We are bringing wood chips from America to fuel a large fossil power station which is being converted from coal burning.
What happened to saving the trees?
and the Chinese are building fossil power stations at a rate which will more than wipe out any saving we might make in the level of CO2.
Now, would someone remind me as to
why we are spending so much money on a fools errand? Because the EU requires it. Why? What country in Europe is better off after joining the EU. Just the managing elite and the apparatchiks.So once again,what will we have gained in this, apart from a lot of giant sized bills.
The planet's temperature has not risen for 17 years ,Not since 1995, long before this global warming rubbish was started.Not nice to realise you've been conned!

I'm beginning to change my mind on wind turbines, I mean, I don't think they are unattractive but in certain circumstances they certainly can be.

I also understand there is an issue with land owners receiving big subsidies for having them on their land, that kind of skews the motivation for their proliferation. I definitely can't agree with that, unless its a small farm in which case, some sort of micro-power generation would be more apt.

In terms of off-shore wind generation, there is the issue of CEC subsidy as well, I absolutely have problems with that too.

Its not a straightforward situation, riven with nimbyism on one side and rampant profiteering on the other.

Mmm, I'll need to have a think about it all. I never did believe in the global warming rubbish, but I am up for more sustainability generally.

And we will continue to be conned Apogee if folk don't start being aware.

Oh I think most folk who realise this global warming/co2 and the rest is a scam pa_broon, do believe in sustainability and treat the environment with respect.

I too don't mind windmills in certain specific situations but when the likes of the county of Angus covers its farmland (and there's a lot of it around there) with the things, plus you examine the planning applications, you see the reason very clearly - money for the developers/landowners.