The EU/Cyprus Deal Is In A League Of Its Own - Or Is It? 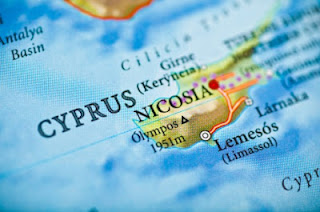 As many of you know I'm an avid reader of crime novels, particularly political crime novels. Twenty years ago this plot would have intrigued me but given no cause for concern:

A tiny island country's going bankrupt.  It's bigger 'pals' decide to help out but only if the country's politicians take 6-10% of every resident's savings to ensure they will get their investment returned.  The people flock to their banks to retrieve their savings but find that their closed, because the decision to do this was taken on a Friday evening of a bank holiday (when the banks would be closed on the Monday).  The people did their best to get their money but few managed and those who had saved quite a few pounds for their retirement found they couldn't access more than a few pounds from the hole in the wall.

The politicians insisted there was nothing they could do other than what their 'superiors' demanded because they'd signed up to be part of a group of countries in which such rules were permitted.

Who would have thought that politicians of any developed country would agree to their constituents paying a massive tax on their savings just to conform with the wishes of the EU?  Certainly not the people of Cyprus.

Cyprus has received a €10bn rescue package in return for a series of despicably harsh conditions including a freeze on their banks to the tune of around €5.8bn. Another condition is a tax on depositors: 6.75% for anyone with less than €100,000 and 9.9% with anyone with over €100,000.

To many younger folk these sums may seem high, but even if Cyprus residents have a couple of thousand euros then their savings are immediately reduced by nearly 7%.  It's been difficult enough for savers since the banks decided they ruled the world and I feel for the Cypriots.

What's worse is that - concerning the euro - deposits under €100,00 are supposed to be protected by EU law - rather like UK citizens were guaranteed protection in the Isle of Man Kaufthing bank disgrace.

Today the Cypriot parliament will vote on the 'deal' while the British Foreign Office bluster around in an attempt to protect the bank accounts of British military personnel stationed there. It's suggested the result will be close with some insisting the politicians will approve the deal. Other commentators say Cyprus may decide to leave the Euro altogether.

The EU has set a precedence of theft which is a criminal offence in most countries. My hope is that this is a massive home goal for the EU and that it will awaken millions to its true nature. Surely this action is enough for the SNP to rethink their policy regarding the EU.

Interestingly, the figures keep changing. They are now talking about 3% at the lower end but 15% over €500,000

It seems most of the big money in Cyprus is Russian and it's there because their money laundering laws leave, shall we say, a little to be desired.

If we follow the Greek example, the Cypriots will use the art of brinksmanship to its fullest effect. The EU and INF have a habit of backing down when it comes to losing a member of the Euro club.

If Cyprus does go bust and leave the Euro, then ironically it is likely to be bailed out by Russian. Putin is already letting off steam. The over €500k limited now proposed would mainly hit Russians. Of course you could argue that it's the Russians that have caused all this in the first place, but I think that's a little unfair. They certainly have the most to lose.

It's a vindication of the decision I took when I retired tho' when I decided against retiring abroad...and I would describe it as legalised theft.

As the final insult, I gather they propose to 'compensate' savers by giving them shares in the very banks that snatched their money in the first place!

And just a thought : If Scotland votes for independence will they want to join the Euro?

Osborne has done the same but more discretely. He has printed money resulting in the value of my savings falling by more than 10% whilst he has been in charge, and reduced interest rates so that my ISAs are paying a mere 0.25%.
Wish I'd bought gold coins when I was younger - it's hard for the government to tax something that they don't know you've got!

The Cypriot president has said that if Cyprus does not accept the bailout, one bank will fold and then another until the whole banking system collapses.
I guess losing 10% of your savings may look more attractive than losing the lot.
But surely there must be an alternative.

As EP points out, that "theef" George Osborne is already robbing savers blind with his euphemistically termed "Quantitative Easing" [It's actually Quantitative Hardship for Her Majesty's Subjects.]

With inflation running at about 3% above Bank Rate, UK citizens have suffered for years.

Have all the pensioners reading this signed this e-petition yet ?

Firstly we have to ask why has Europe gone down this road to disaster – the answer is simply to appease Germany – Oh! how frighteningly that smacks of history repeating itself.

In addition this levy shows how willingly Brussels are ready to ride roughshod over the established rules of banking, in particular the protection of individual investors.

But most worrying of all, is that if this levy is enacted, it will set a highly dangerous precedent.
If it’s Cyprus today, then why not Greece tomorrow, or Italy, or Portugal, or Spain or even Ireland.

This has the potential to initiate a pan-European run on the banks by investors and total insecurity in Europe’s financial markets.
The net result will plunge Europe into a spiralling recession reminiscent of the 30’s; no doubt with concomitant civil unrest in many areas.

All of which takes me back to my first paragraph and history repeating itself.

Aye I noticed that earlier Dioclese. Somehow I think money laundering laws for the big boys is available everywhere.

The worrying aspect is the precedent here and also the fact that the UK is suggesting using UK taxpayers money to bail out our soldiers.

That's a thought I have too Dioclese. I hope the Scottish government is watching this very, very closely.

Yes that's true EP. Our savings are reducing in value daily. I wish I'd had the sense to do something like that too but my father said it was too risky. 'A good Scottish bank like the Trustees SB' was his answer. He never lived long enough to see his beloved bank sold off and run by sharks.

The alternative is that they leave the Euro Hamish - I would like anyway. Not sure how they would fair for a few years though.

We have indeed Joe and we keeping voting them in. Why? Is it because there are no alternatives other than big party candidates?

Going to do it right now Dioclese and hope others do too.

It seems that Germany is trying to appease their population JRB because many are angry with Germany always bailing out others.

But the blatant law breaking is evidence that they'll stop at nothing and yes, it will be interesting to watch bank share values this week.

I would agree with the comments re. QE but don't forget it was introduced under the stewardship of Alastair Darling.

My view, which I've expanded on my web page, is that people in the other southern European countries which are in a similar financial position will start withdrawing their savings before their own government gets the same idea. This will result in the lack of investment for business in those countries which in turn means that any investment that does take place will come from abroad, and particularly from Germany. Germany has failed to dominate in the past by military means, but is now starting to dominate by financial means.
And if Vince Cable gets near the levers of power in this country, it is a very small step from a mansion tax to a savings tax.

I hope they have Dioclese.

Yes Jim, it's too easy to forget such things.

I've read your post EP and agree with you. Strangely there hasn't been a rush elsewhere within the Euro and I don't understand why, but perhaps it's early days.